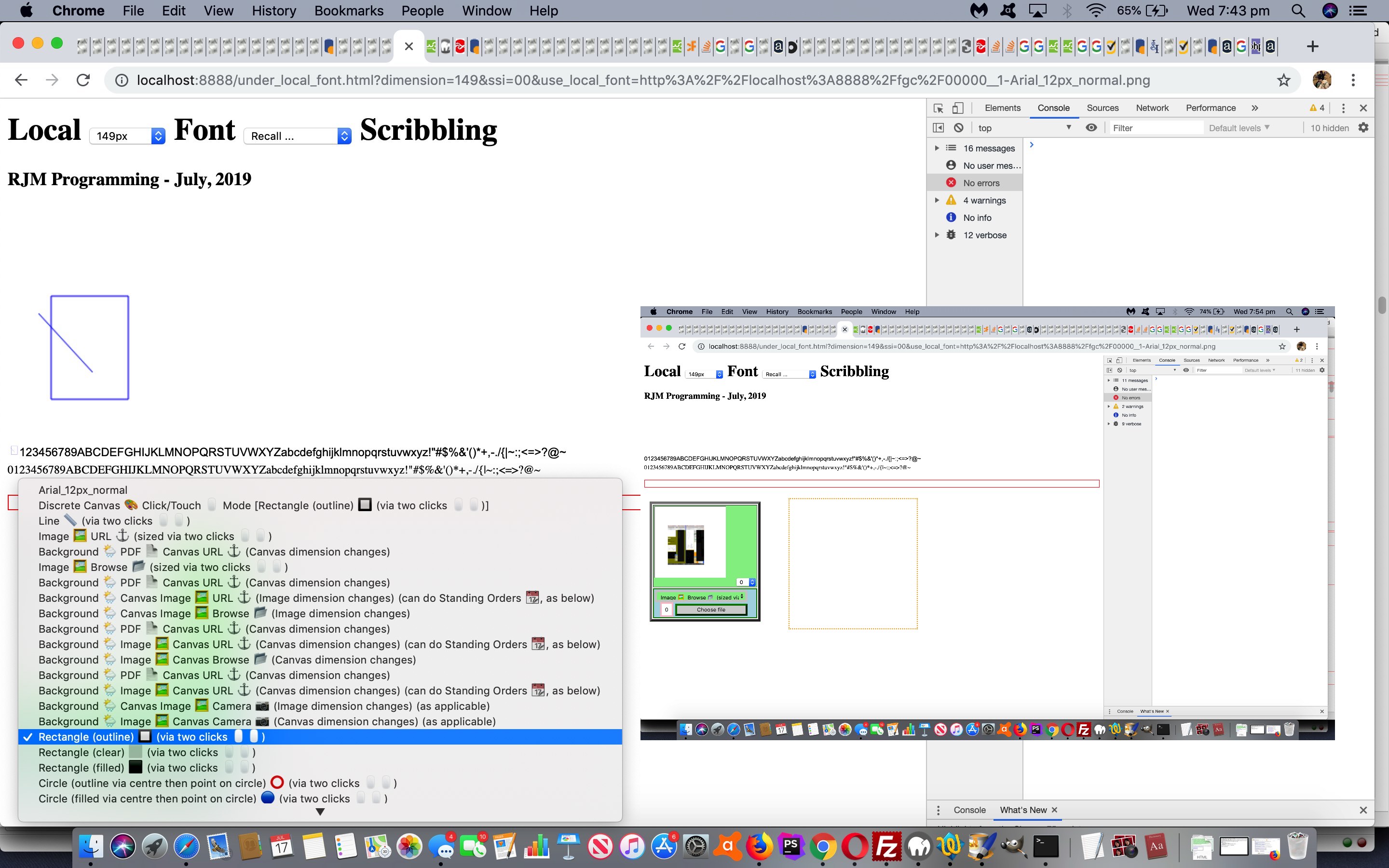 With software integration we normally find it is from the “outside in”, in somewhere shape or form, not like today’s emphasis on the “middle”, in that …

Why change the “middle” and what was it, and what did it become? Well, we change it because the …

This is all “same domain” work, so it is basically “parent/child” “webpage/iframe” arrangements (among the three HTMLs above) where “grandchildren” can reference up via “parent.document” and “top.document” to “parent” and “grandparent” respectively. “Seniors” best look to the “young’uns” via the “onload” event on the “iframe” with (“global var crazy”) code such as …

End result, building on yesterday’s Local Fonts Revisited Dropdown Tutorial, can be like pictograms or hieroglyphics or other coding systems, mapped to the keyboard ascii character set, and potentially saved as your “Local Font”. Bit restrictive (that way), yes, but we’ll see where we end up. 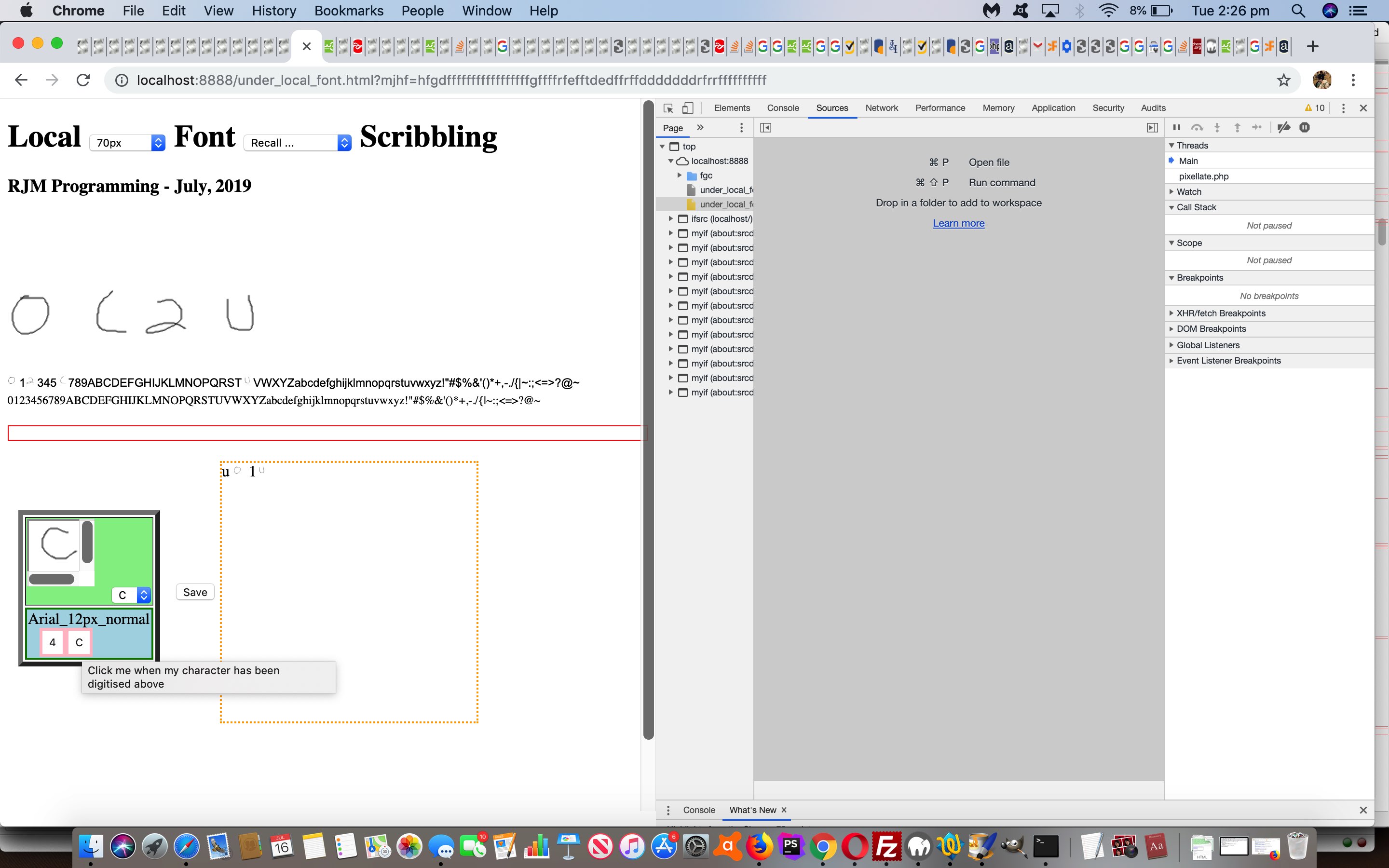 Introducing the HTML textarea element got us thinking about line feed content when we presented Local Fonts Revisited Textarea Tutorial, and earlier on we’d shored up the logic by involving the div (contenteditable=true) …

That’s made it better when multiple Local Font characters appear with any one div element.

Flexibility has improved today too by making our select element dropdown within the character (via canvas) capture section be dual purpose, keeping the original …

… which does not sound like much of a change, but adds considerable ease of use to the arrangements. This change affects “grandchild” level goings on, but is handled totally at the “top.document” (ie. (grand)parent) level as far as code goes. We did not have to change the “grandchild” level code at all for today’s improvements. This all works because of the web application design …

And speaking of dropdowns (albeit “grandchild” ones), our third change today involves a dropdown, this one at the top.document (grand)parent level, making that “70” of …

idea of applying a “background image strip version of the textual content” brought to the fore (which can mean retract what’s there to the back) only where a user defined font character exists … alas, we discovered (without a lot more effort (we may yet do)) this only suits monospaced fonts such as Courier New (going back to that decision we made that the digitizing canvas should be 70 x 70)

… becomes a hardcoding that is “abstracted out” (ie. made generic) to be user controllable, via a dropdown. Save a Local Font with that dimension, and that will become your default dimension, though you can change it to ignore the saved Local Font, as required.

See this with the changed under_local_font.html‘s live run link we have for you today. We hope it interests. 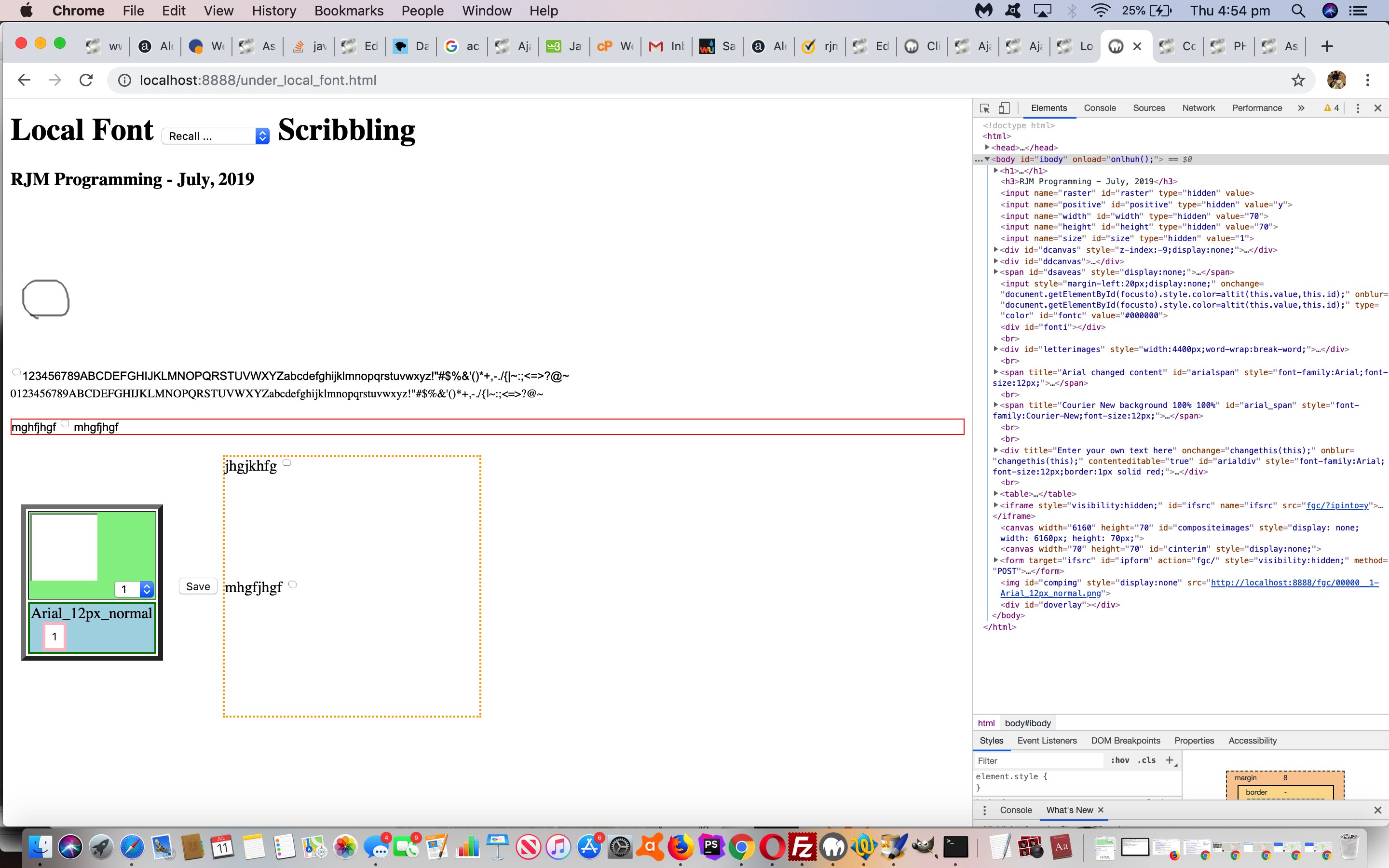 We find with some projects you have to remain fairly “current”, else it becomes very hard to get back into it. The recent Local Fonts Revisited Onclick Tutorial is very much “one of those projects”. There is a correlation for my tiny little mind, that being when the job is very hierarchical with its concepts. Though we admire “onions of the 4th dimension” … wouldn’t it be sacrilege not too?! … it’s just hard work, unless, as we say, you stay “current” with the job. Many more days away from “Local Fonts” and we think it could have got ugly.

As above, for “speed of progress”. This “Local Fonts” project needs patience, and even so, we may conclude it is not worthwhile pursuing, but believe it or not, with this project, there is an aim, that being to be able to show a blog posting webpage such as the one you are on, in a “Local Font” of your creation. We’ll see. In any case, on a long trip you often learn other things than just the final destination “moral”. We like a good trip, and well acknowledge that old thought that the world can be divided into those who like the trip and those who like to get there, but there are also those who like both (maybe even this).

And so today, we saunter along, just trying to cater for the confusion in our mind regarding how …

… and, as you may have guessed from “the build up” above, yes, we go with the latter (because, respectively, the textarea element is purely for text and “Local Fonts” involve imagery and when using “overlay” techniques we seemed to have trouble with element focus issues), via a whole rewriting of the webpage’s …

… and yes, you can see for yourself with the changed under_local_font.html‘s live run link and code that we pick optimal times, considering that new div contenteditable=true element’s innerHTML (ie. its HTML content), that we needed to convert …

… to get the correct result. 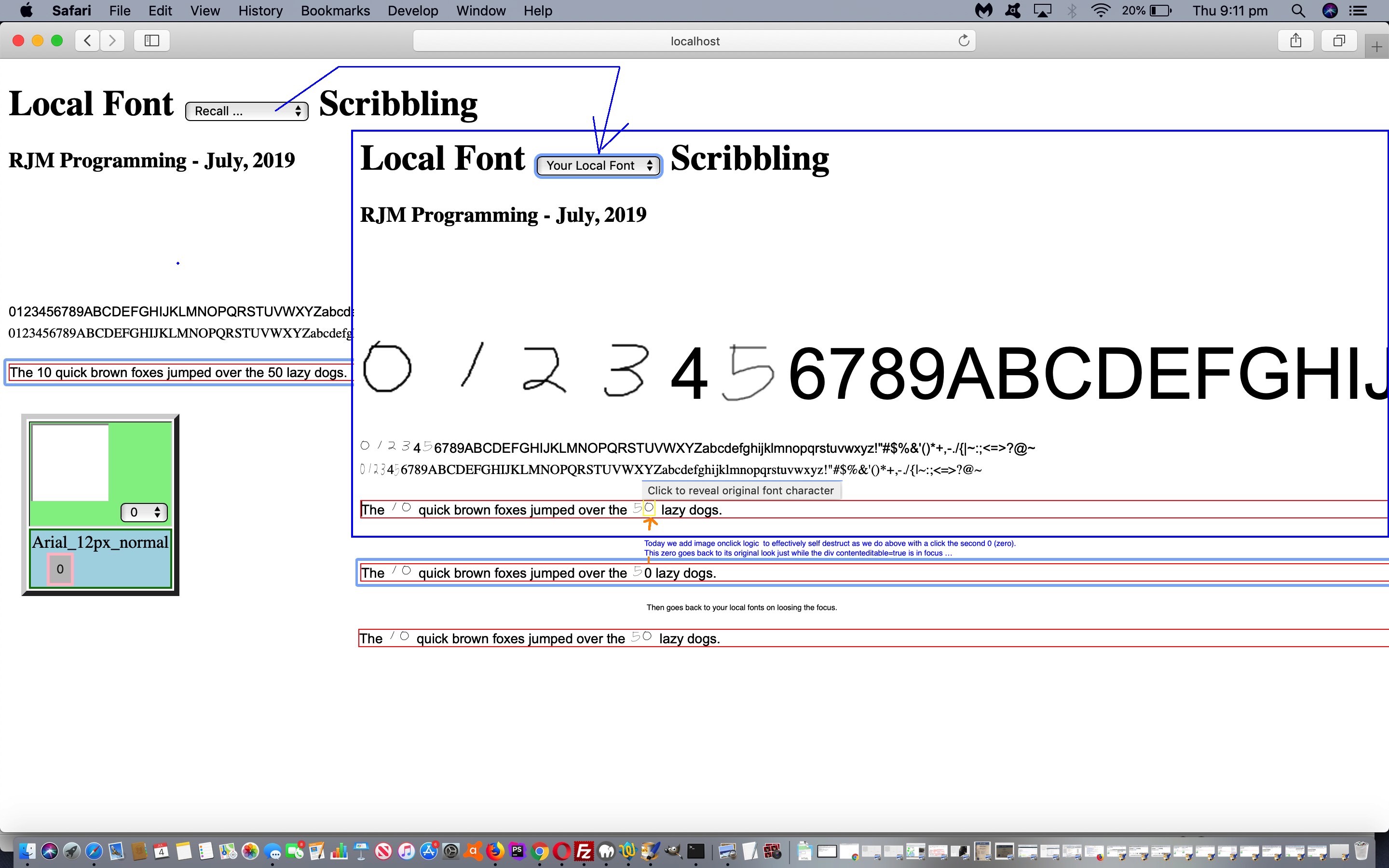 Not much doing aesthetics wise with today’s improvements on yesterday’s Local Fonts Revisited Application Tutorial. It’s more a shoring up of the logic of that div contenteditable=true user defined field and incorporating two new ideas or concepts, those being …

At first we thought Javascript [String].split(‘<img’) thoughts, but soon realized what would be much neater (and cuter) would be to “infuse” into the img elements onclick logic to self destruct. We like this because …

To see these ideas in play, you can see this idea play out at the changed under_local_font.html‘s live run link. 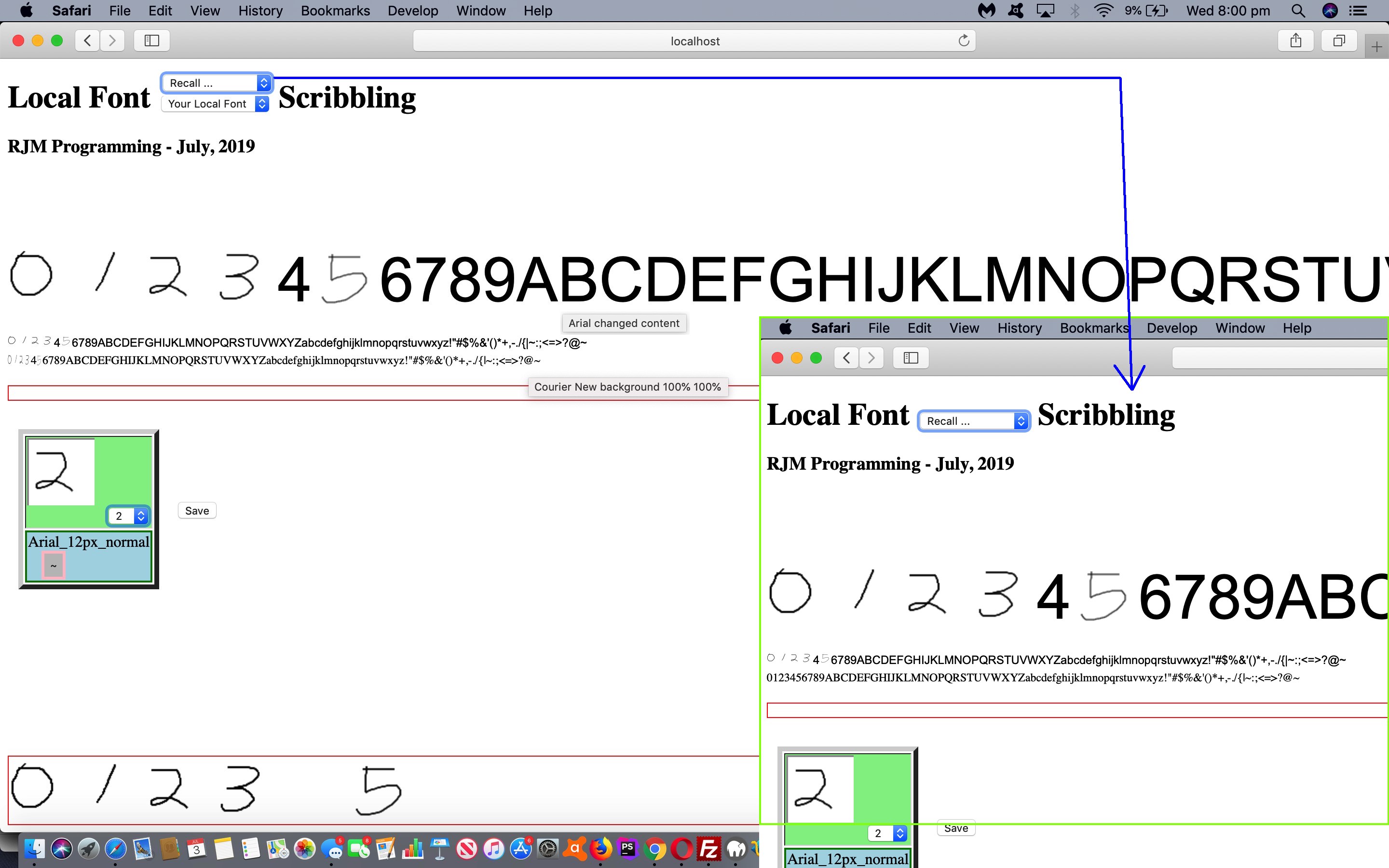 It’s going to take a while to “bed this in”, the web application of yesterday’s Local Fonts Revisited Recall Tutorial involving local font management, and now thinking about “applying” local fonts digitized by the user.

We want to explore alternative ideas to …

At first we tried that linear gradient thought that a background might “glow above” the foreground (tee hee, but seriously, this technique does suit sometimes, as with Javascript and PHP Base64 Media Tutorial). But then we saw sense and to “retract what’s there to the back” we could set the existant element CSS property color:transparent, opening the door to the plan below.

The plan we have going forward with this approach goes like …

As you can see, this is ongoing, and we hope to iron out some of the restrictiveness and get to cross browser issues and “apply” to real world data, such as this blog contents, perhaps.

In the meantime, see this idea play out at the changed under_local_font.html‘s live run link.

You can also see this play out at WordPress 4.1.1’s Local Fonts Revisited Application Tutorial. 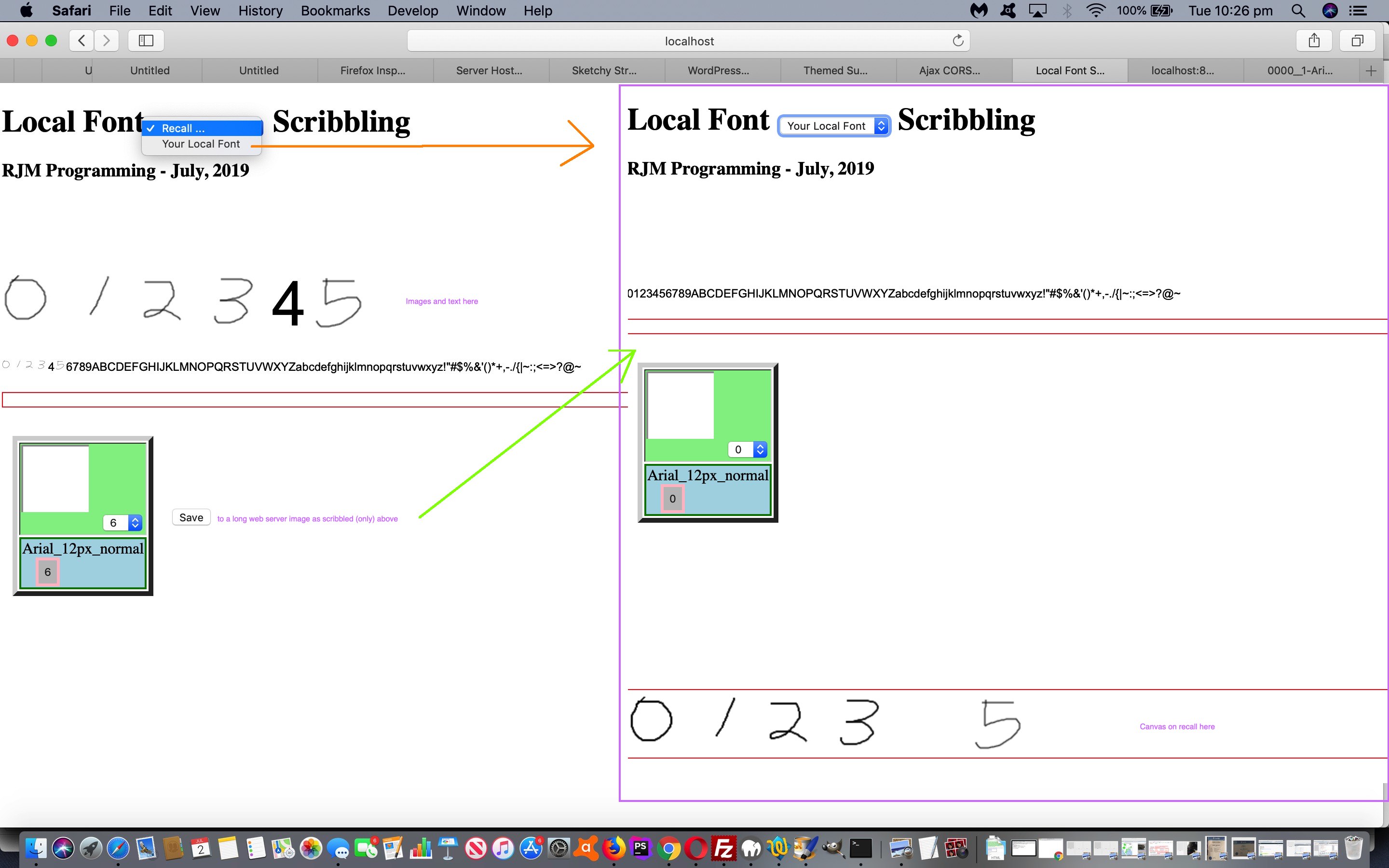 In this respect we had to decide a mechanism by which a user could recall their work. Our decision is to …

… leaving tomorrow’s work to “meld” that recall data into the natural workflow of that previous work.

It’s best you view the changed under_local_font.html‘s live run link to see what we mean here, getting the [canvasContext].drawImage() functionality to be able to draw multiple images into a single canvas element, the curiosity being that we needed to …

… a form of verbosity we were not expecting but required because the canvas would clear in between Local Font character definitions. 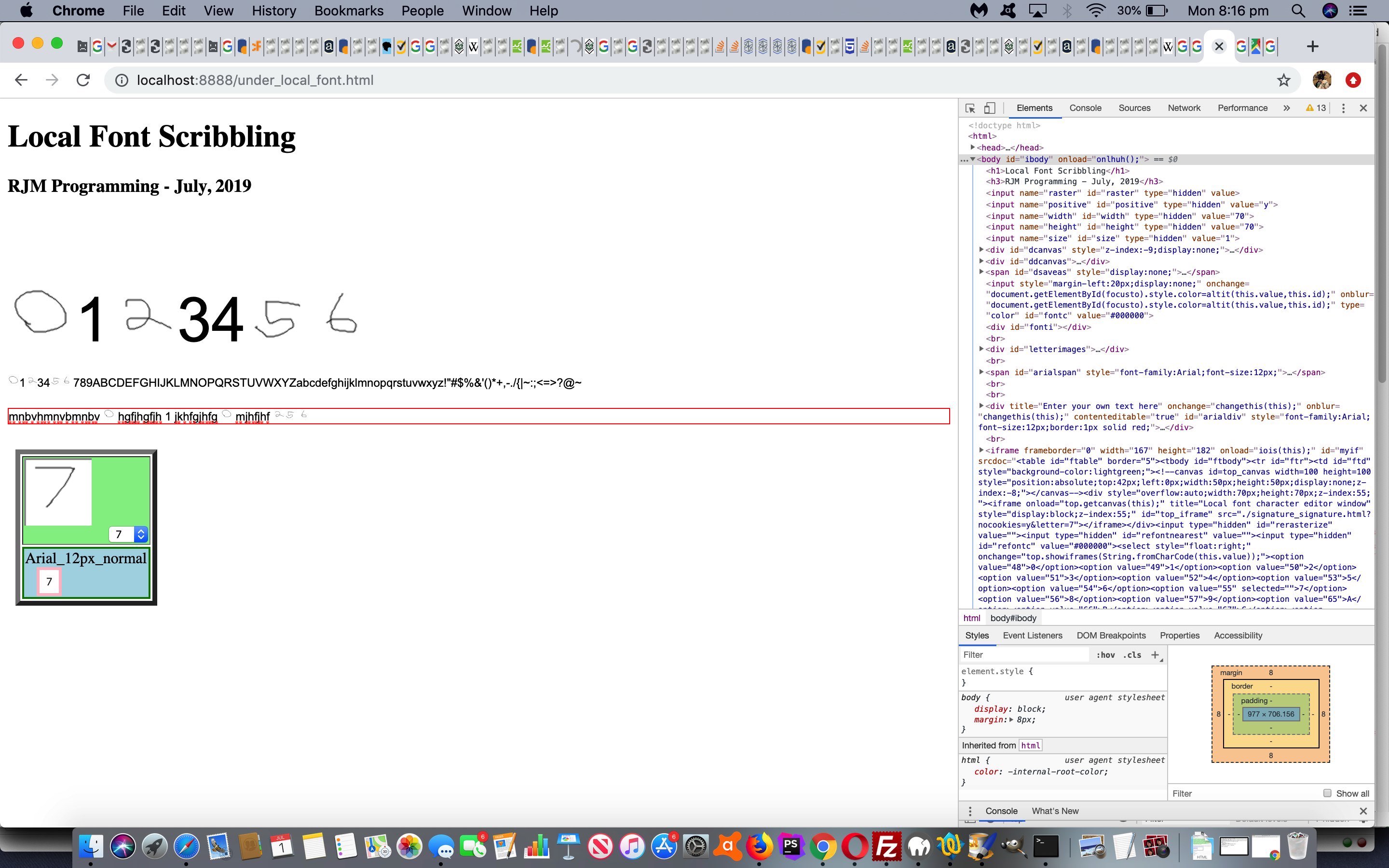 The user can see these characters “infiltrate” text strings there on the webpage, one …