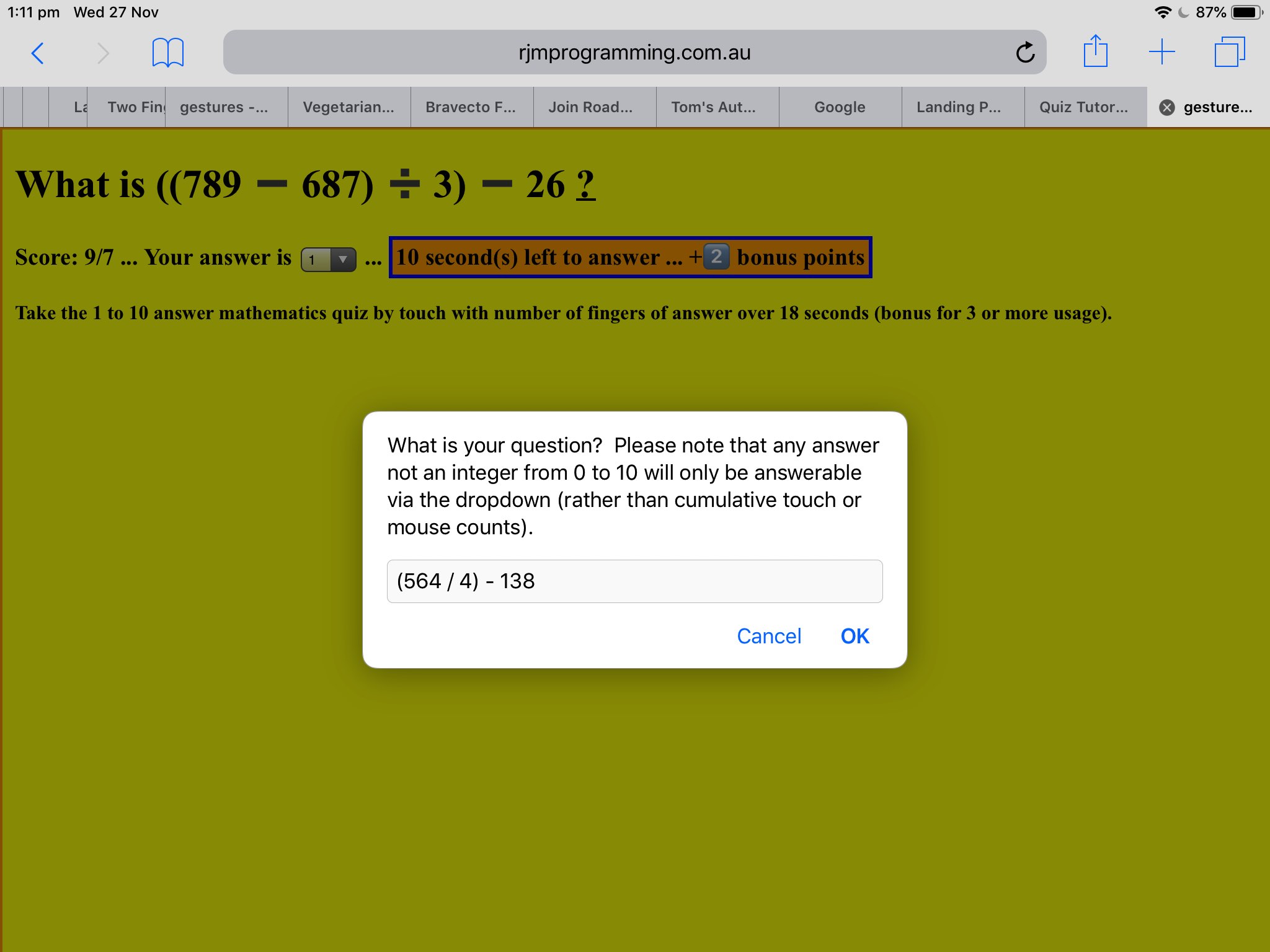 We always think, as far as quizzes go, like with yesterday’s Mobile Two Finger Gesture Quiz Tutorial‘s (mathematical) quiz, it is good to allow the user to add their own tailored questions into the mix.

Along with that, we had to do a lot of …

… for today’s work? Guess it will be a mixed audience needing to know why? Well, it goes back to the organization of our event logic co-ordination at the document.body onload event, as per …

There are a couple of instances, we apply now, of “emoji buttons”, in other words …

… an “a” link supplanting the previous “?” question mark hardcoding with the HTML …

To make your own Mathematical Quiz questions try the changed mobile_gestures.htm‘s live run for yourself.

You can also see this play out at WordPress 4.1.1’s Mobile Two Finger Gesture Your Quiz Tutorial. 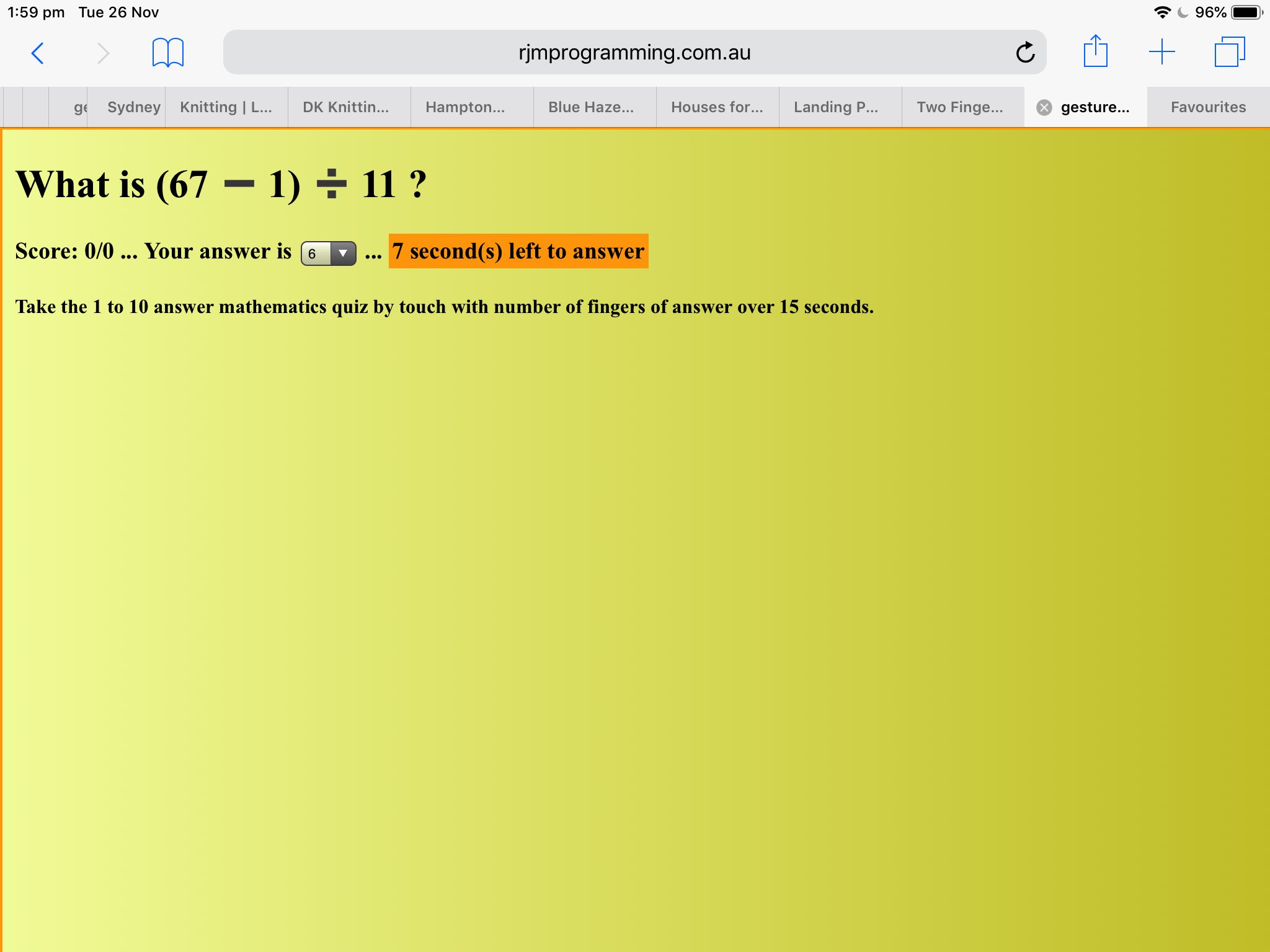 Making use of “more than one” finger mobile gestures started with yesterday’s Mobile Two Finger Gesture Name Game Tutorial is us adding a Mathematics Quiz bit of functionality today.

In doing this we thought we could construct a quiz that limits answers to integers between one and ten, and in so doing, mobile users could answer by placing that number of fingers onto the device screen synchronously. But trying this out in practice is how we discovered how tricky this is to do for the user. And so, as a result, we …

… and that way, if you try this new Quiz functionality, selectable in another (select element style=”display:inline-block;” replacement of “gestures” hardcoded word) dropdown in the changed mobile_gestures.htm‘s live run, please feel free to see what we mean here on mobile devices. The Quiz uses the idea that Javascript eval can be used to interpret the answer out of members of an array of questions like …

… though, our questions are a tad more challenging than this, using the Javascript “checking the answer” function … 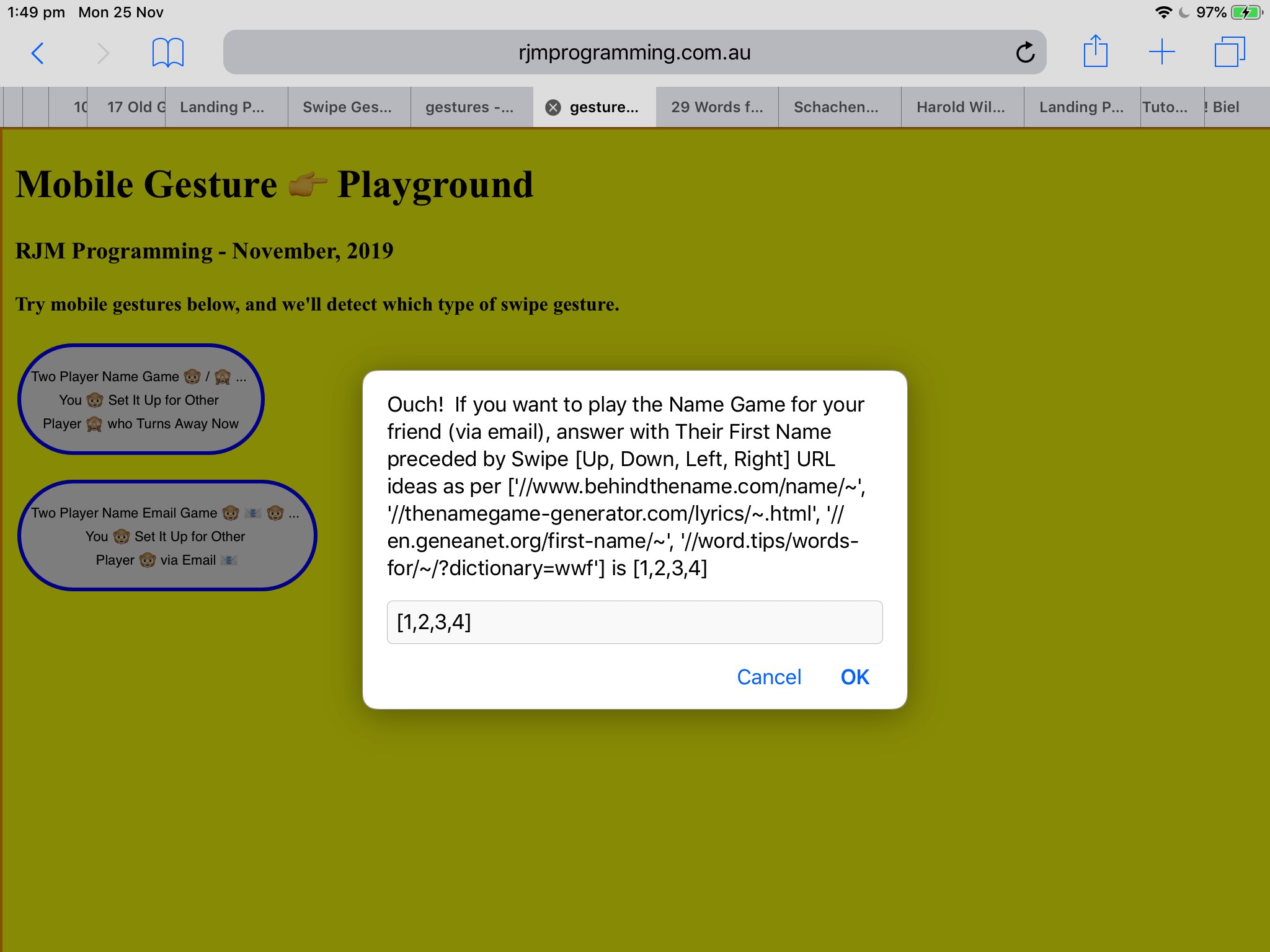 … such as “pinch” and “stretch” two finger touch scaling gestures are very common and very intuitively used the mobile device world over.

Mobile touch event logic, as a layer of complexity above mouse logic, can determine the number of fingers synchronously touching the mobile device as per …

… and as a programmer, quite naturally, we may be interested in coding logic to take advantage of this mobile device event complexity, “on occasions”. We say “on occasions” because it can be quite difficult to get three or more fingers to be “synchronous enough” to make that “numf” variable above reflect that “three or more fingers count”. More on that tomorrow, but for today, let’s write code for the “pinch” and “stretch” gesture scaling events as per …

… thanks to the advice from this excellent link.

If you have that “pinch” or “stretch” gesture capable mobile device, and you want to try the changed mobile_gestures.htm‘s live run, please feel free! 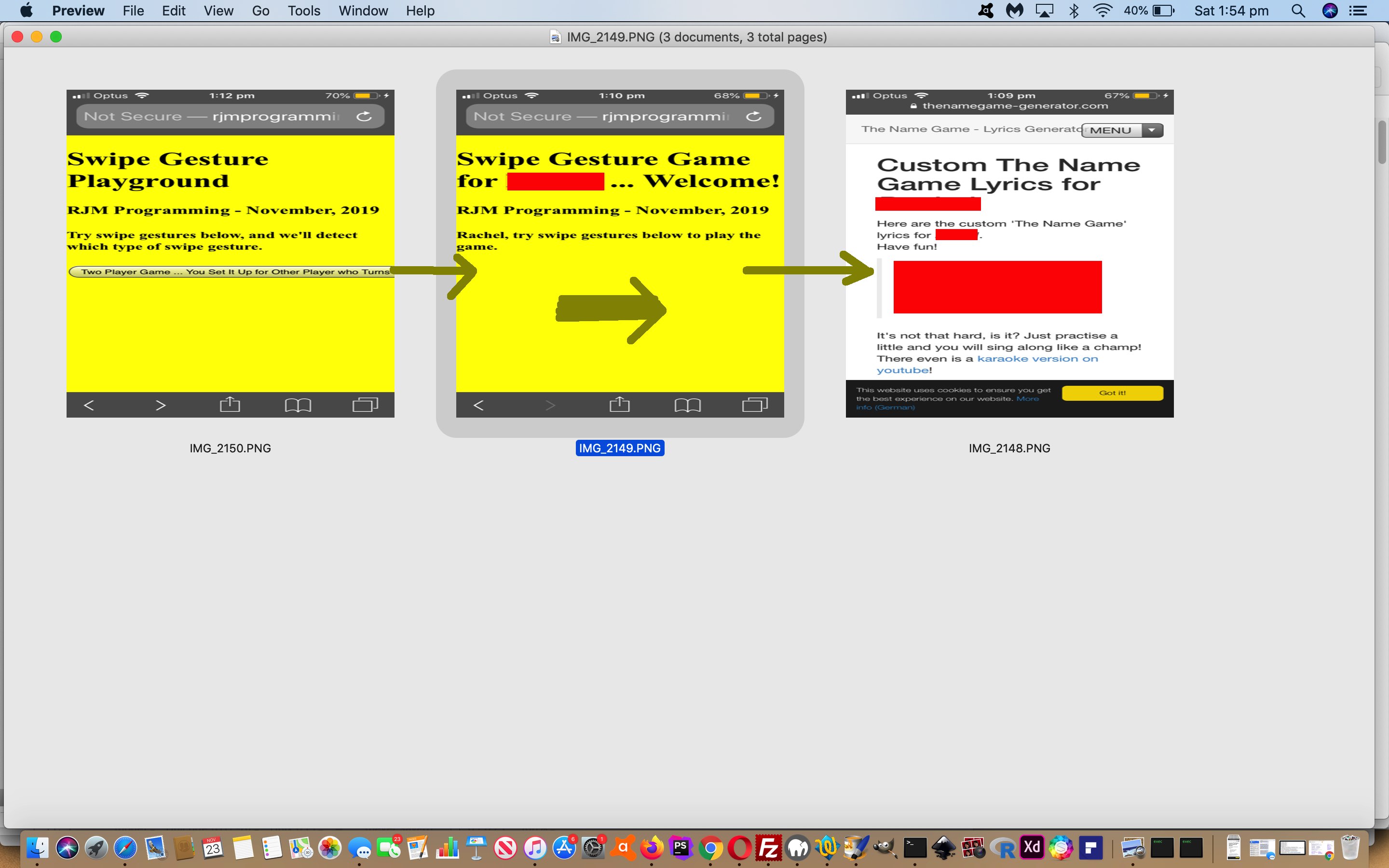 In this Name Game a … 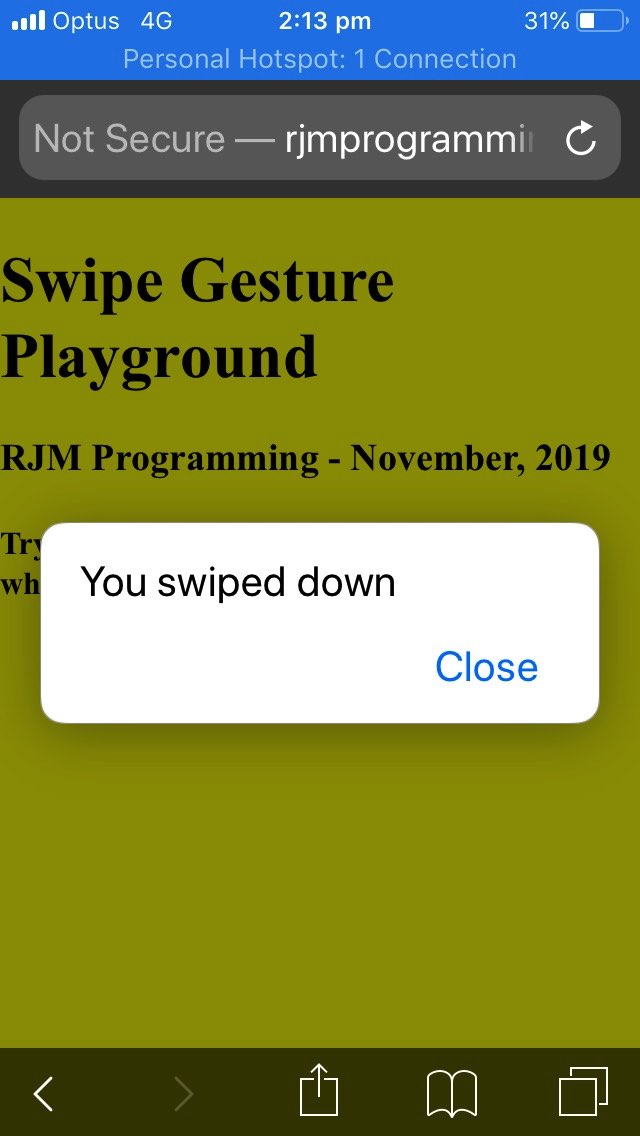 Have you ever been curious about “the behind the scenes” detection of “swipe” gestures on mobile platforms, whether that be…

? The answer for us is “yes”. So we decided to start down a road of discovery largely with the help of this useful link, thanks.

This research led us to write an “in all innocence” “proof of concept” “gesture playground” HTML and Javascript mobile_gestures.html live run for you to swipe away, and be detected! It may be all you need to dive into some mobile web application development!