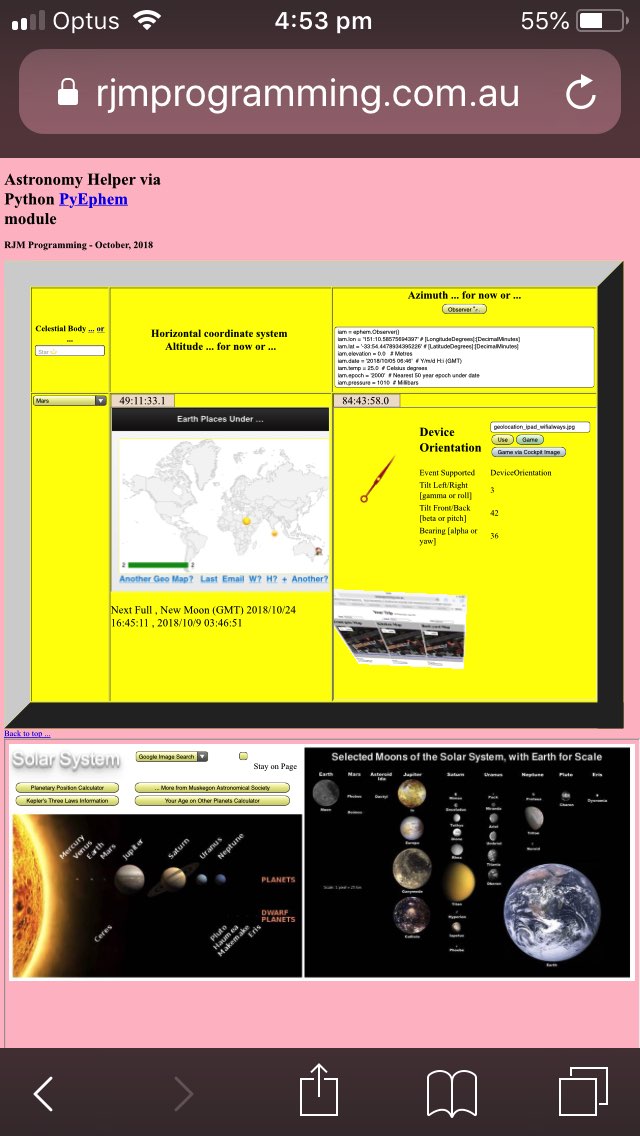 Yes, today we have a “Star Tutorial”? Thank you, thank you very much, well you shouldn’t have. Ohhh, so you didn’t. No, you’re not. Well, that … sure … was … embarrassing. Anyway, further to yesterday’s PHP and Python PyEphem Astronomy Helper Observer Tutorial work, today, we …

A mixed bag of improvements we hope you like, and try out for yourself at a live run‘s PHP ephem_astronomy.php code changed this way for this work. 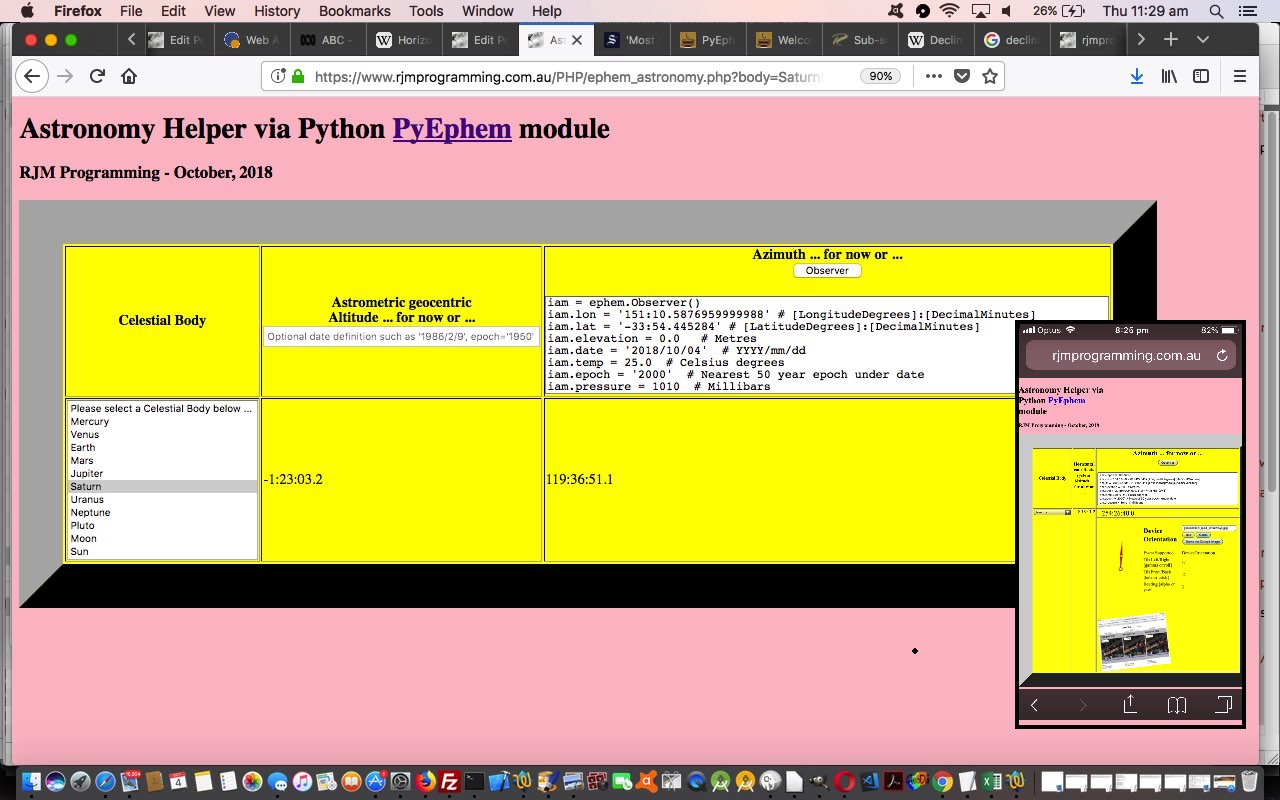 Following on from yesterday’s PHP and Python PyEphem Astronomy Helper Primer Tutorial “PyEphem Python module Hello World” feeling tutorial, we get a bit more into the innards of PyEphem today, by allowing the Astronomer details to become part of the mix, as an “Observer” object, in the Python. So the web application user can click/touch the “Observer” button to optionally define their (as per (thanks)) …

… so that what gets calculated in this scenario, as part of the Horizontal Co-ordinate System is …

… which, following the leads of PyEphem, would be what interests those practising astronomers out there. 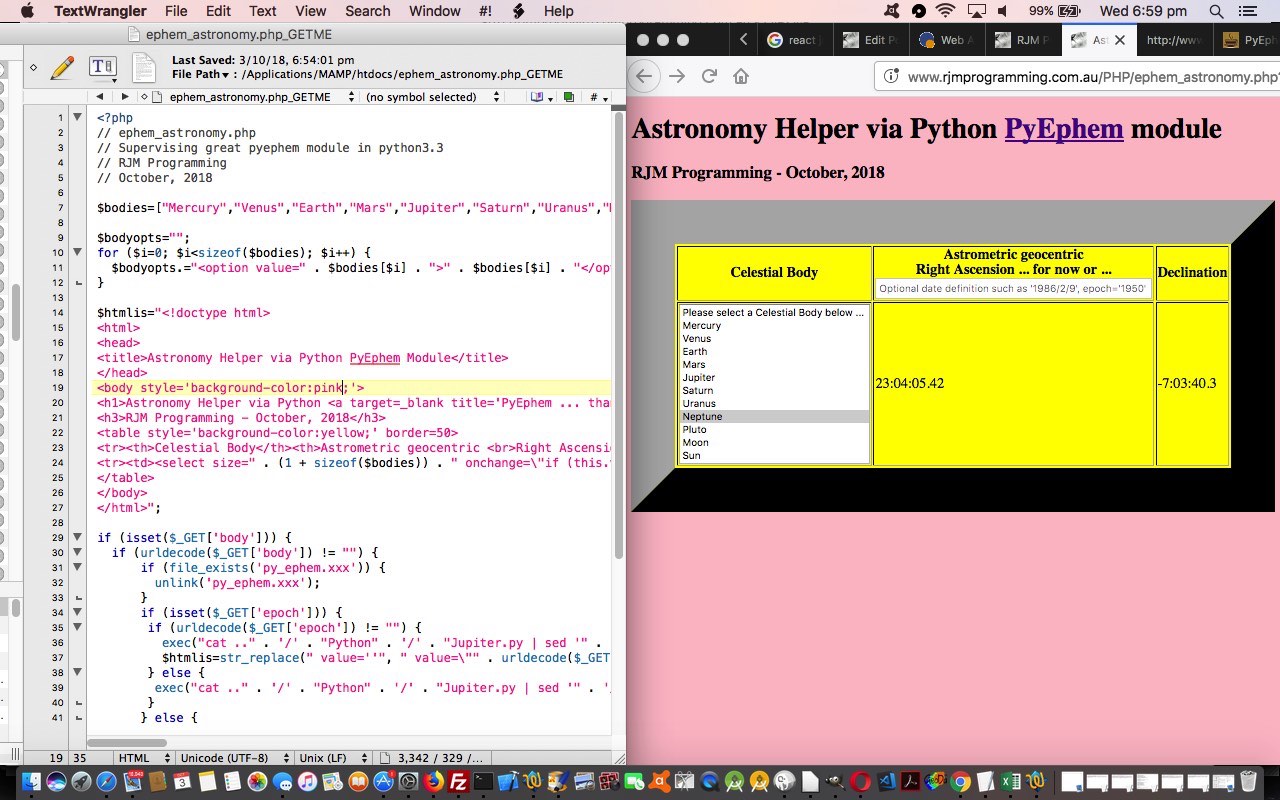 “The Three P’s”, for us, namely, PHP and Python and Perl, are all great choices as serverside programming languages. You will find, as a result of this, that programmers have written great code for one or other of them, and perhaps for all three. We came across a “heads up”, thanks, to a stupendous Python module called PyEphem that we are introducing at this blog today via …

… for a simple PHP supervisory arrangement (via PHP exec) for the (hard working duck underneath the water) Python PyEphem module controlled astronomy calculation brilliance underneath.

We have a short “stream of consciousness” PDF slideshow (of installing, coding and running) to augment your PHP live run‘s PHP ephem_astronomy.php code for your perusal. Early days, but exciting days!