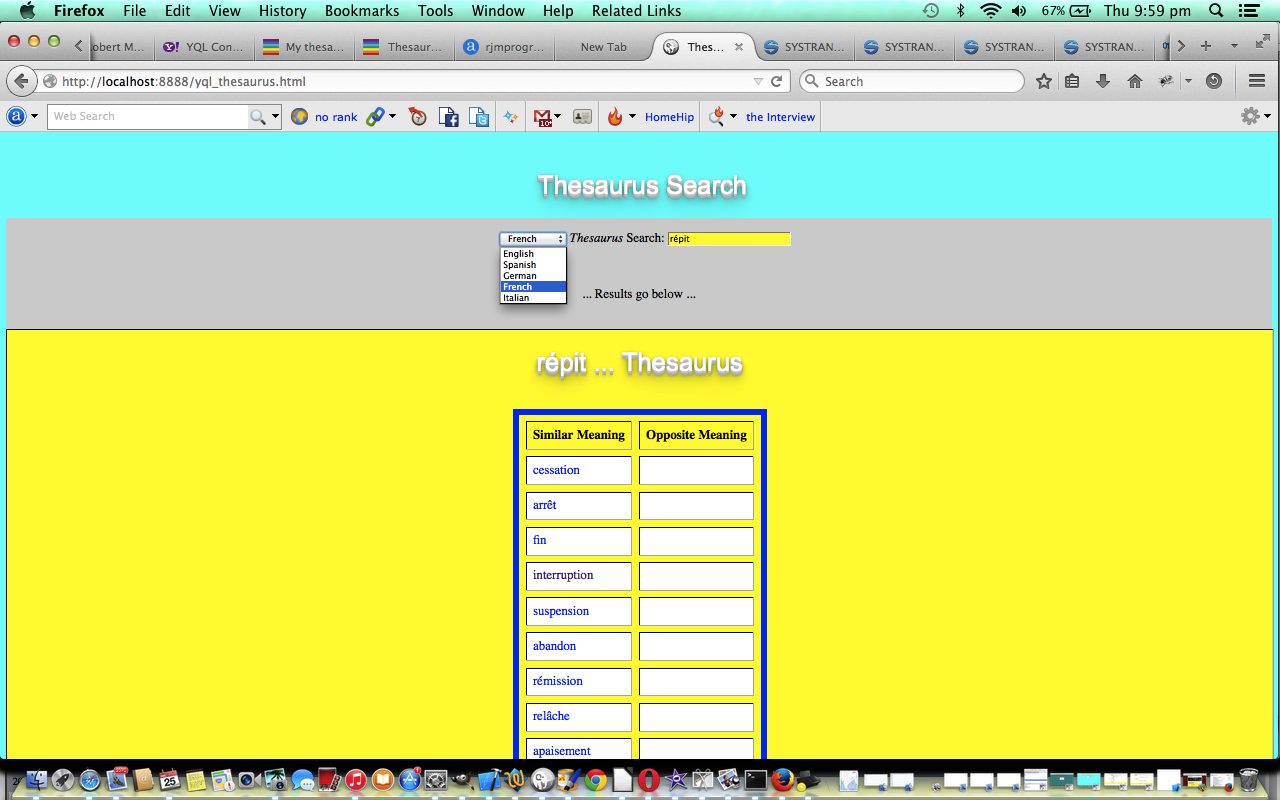 Here is a tutorial that might be re-introducing you to the Yahoo Web Services called YQL, building on previous ones here at this blog. The name is the way it is because it simplified the API aspects of its functionality for the developer to concentrate on SQL, and I’m really supportive of this concept. You don’t have to output in JSON, as other data forms like XML are acceptable. Let’s see what Wikipedia says about YQL below.

Yahoo! Query Language (YQL) is an SQL-like query language created by Yahoo! as part of their Developer Network. YQL is designed to retrieve and manipulate data from APIs through a single Web interface, thus allowing mashups that enable developers to create their own applications.[1]

Initially launched in October 2008 with access to Yahoo APIs,[2] February 2009 saw the addition of open data tables from third parties such as Google Reader, the Guardian, and The New York Times.[3] Some of these APIs still require an API key to access them. On April 29th of 2009, Yahoo introduced the capability to execute the tables of data built through YQL using JavaScript run on the company’s servers for free.[3]

And what is a thesaurus? Read what Wikipedia says here but, basically, it can be thought of as a repository of a language’s list of words of a similar meaning to the word of your interest. It is a great tool for people learning a language foreign to them, especially regarding their vocabulary.

The two big PHP functions of use (as distinct from an Ajax approach, requiring no PHP … read on) for this are:

Good links for information regarding this tutorial (thanks) are:

Another tool you should have in your armoury for jobs like this is the online JSON validator here. A generic JSON approach to issues could be:

Stay tuned for an interesting blog posting tomorrow which combines the new thesaurus functionality of today’s contribution, along with the functionality “smarts” of yesterday’s PHP/CSS Sentence Auxiliary Verb Game Tutorial.

As of 14th May 2015 a blog posting called HTML/Javascript Homonyms Game Tutorial inspired a “tweak” to the arrangement above such that a call of the web application above such as Sense of Humour will cause the display of a lookup during the “onload” event, as required.