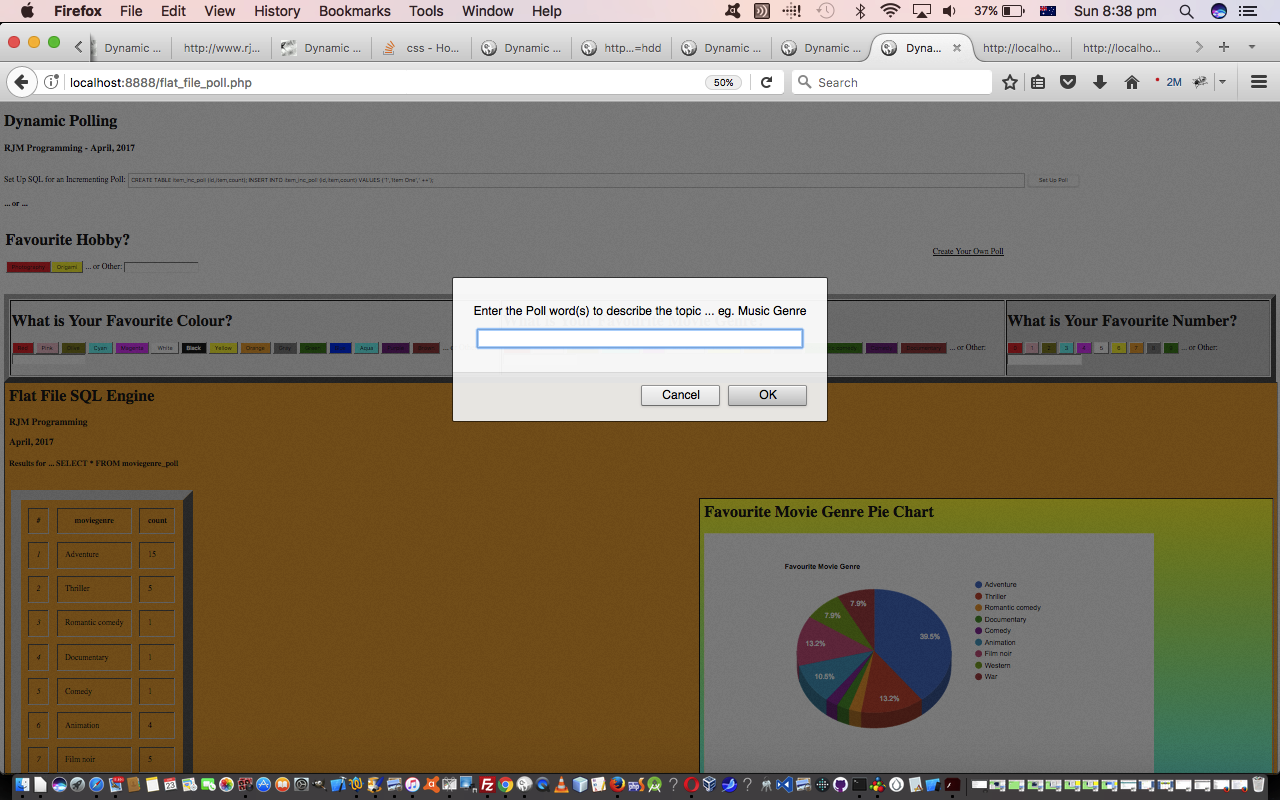 Can the Javascript client side of the web application world “save” anything? Sort of, if you want to consider HTTP Cookies, and lots and lots of websites do this, as you probably know if you use the web to shop for things. A server side language like PHP (or ASP.Net) can make this arrangement more permanent, because, as you probably know, you can clear the cache and (web) browser of cookie information whenever you like. Often that “permanence” takes the form of database record(s) but today, we’re doing it via a one file (snapshot) per IP/browser brand/date combination.

… as seen from the Javascript client side of things, the place most of we users interface to when we are doing a lot of our online goings on. In this “slice” of the “net” Cookies, or perhaps, Indexeddb, or perhaps, node.js, or perhaps MongoDB are interesting places to go to discover a more permanent data arrangement. Here, though, with our PHP driven Dynamic Polling web application supervising the Flat File SQL Engine child iframe functionality, we can fall back on web server files, as we do with that Flat File SQL Engine, and so, even though we are, for all our intents and purposes so far, just interfacing to the one web server file, it can have some of the powers of a proprietry database none the less. And the most significant feature in this respect is its ability to store data for as long as that web server flat file exists in a non corrupt state. Javascript client accessible HTTP cookies rely on the web browser cache not being cleared, which is no guarantee, for sure, regarding data permanence.

This “data permanence” came into play with our Dynamic Polling web application we left off with SQL for Flat Files Poll Tutorial yesterday, as a result of our desire that you, the user, should be able to construct your own poll, and revisit the webpage to review the findings, or add to the findings, the latter of which the general public visiting this web application can do as well, once you, the poll creator, ever click one of the poll option buttons to set the (DDL) “ball” rolling.

And so that leaves us with, today, the PHP flat_file_poll.php with its associated live run link (and changed for today’s work in this way) supervises the child iframe hosting flat_file_engine.php ((with this live run you can try) and which accommodated in this way the “make your own poll” new functionality, for your perusal … and use, hopefully … feel free.

… as well as, at least for us, a sense of satisfaction that design has been a major part of the project, all the way through its unit testing phase, and beyond.

So interfacing being a “two way street” did mean that we needed to tinker with the Flat File SQL Engine child iframe part of the interfacing to the Poll Web Application parent. We didn’t want our DDL “CREATE TABLE” (+ DML “INSERT”) ideas of yesterday to change, because we want any user to be able to create their own poll if they like, and we think to involve any SQL “UPDATE” statement is far too convoluted. So with a poll, users vote, and users get a vote each, generally, so we want numeric “count” data table fields (which we have control over, and arrange that such fields are the last fields in our DDL “CREATE TABLE” statements) to be able to be incremented in a Flat File SQL Engine “INSERT” statement. No worries, we make the rules, and so the rules for this, are …

We hope you try some polling today. 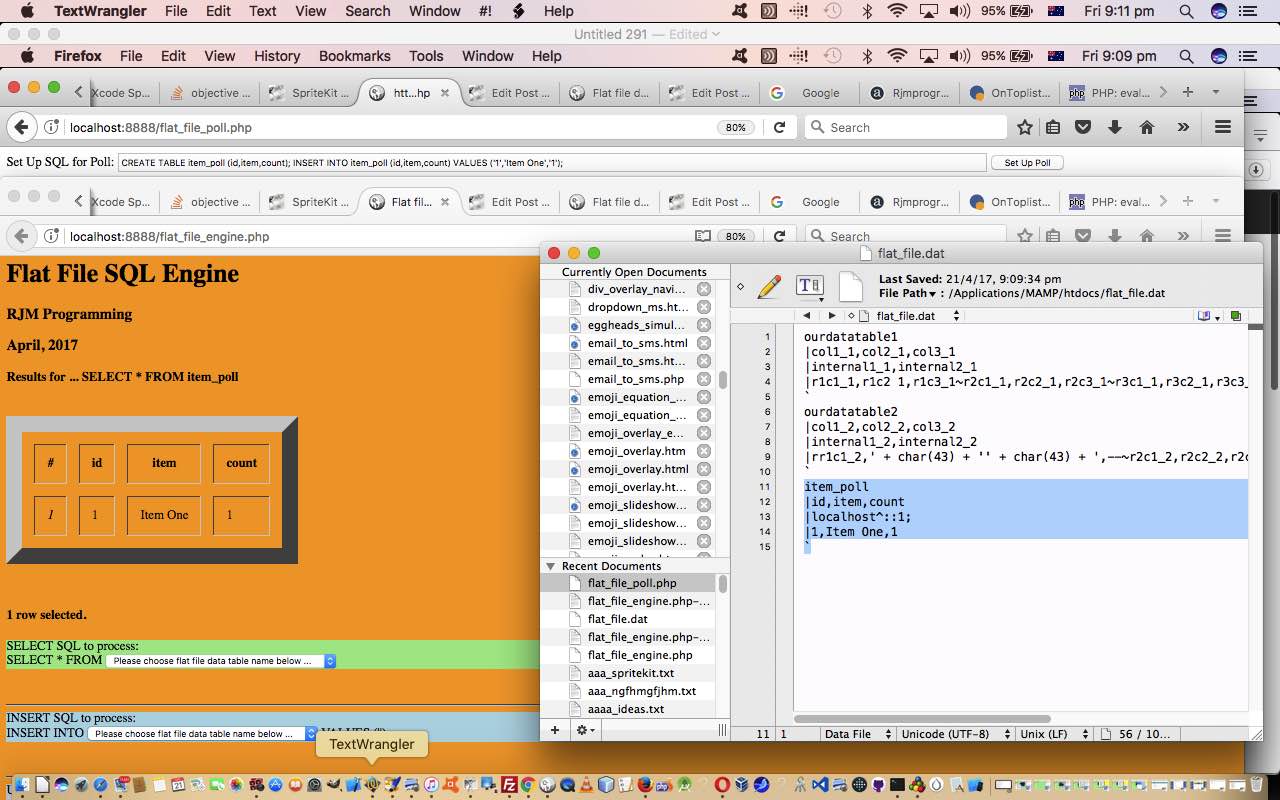 … well, yes, that is still the go, and today (as with WordPress 4.1.1’s SQL for Flat Files DDL Tutorial) we open up a mechanism in the code of flat_file_engine.php (with this live run you can try) and which in a small time way, in this way to allow for this interfacing to other www.rjmprogramming.com.au domain web applications that fit in with the “protocols” we introduce for our Flat File SQL Engine today. The rules of interfacing are … 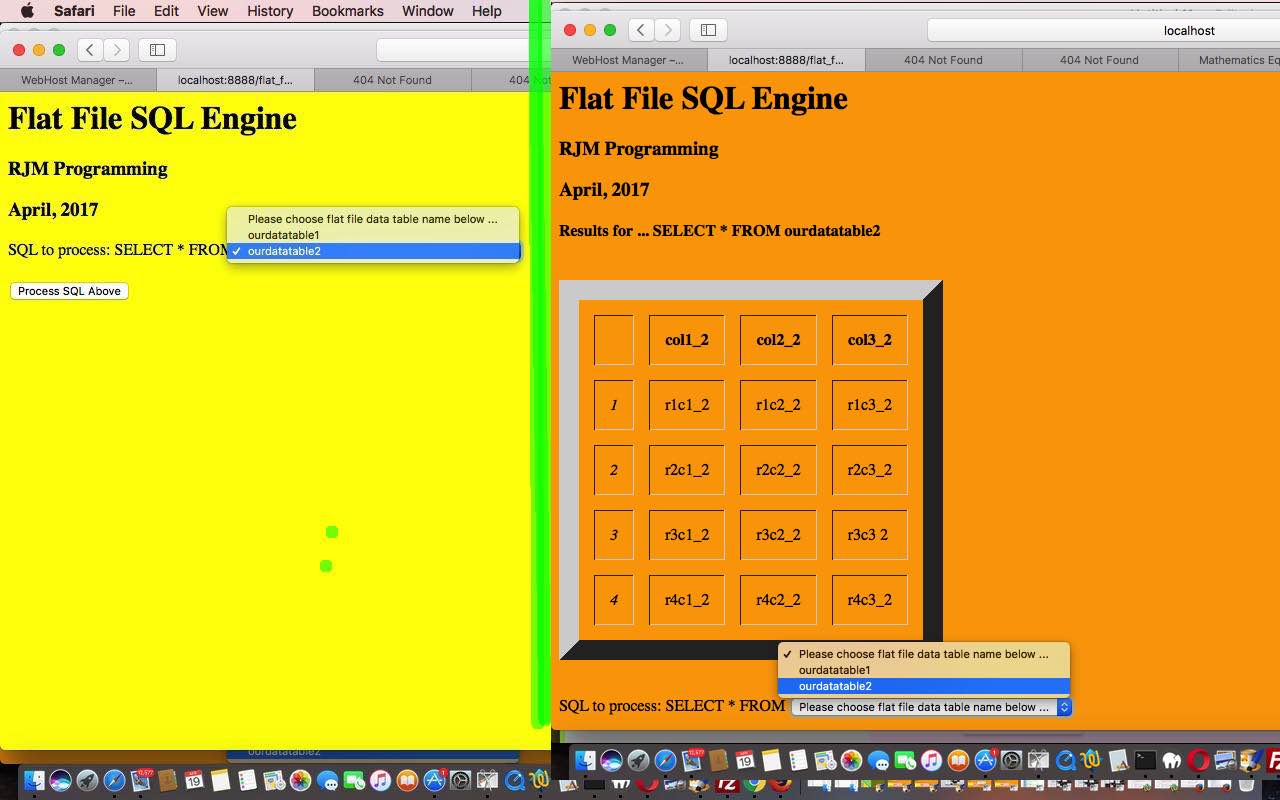