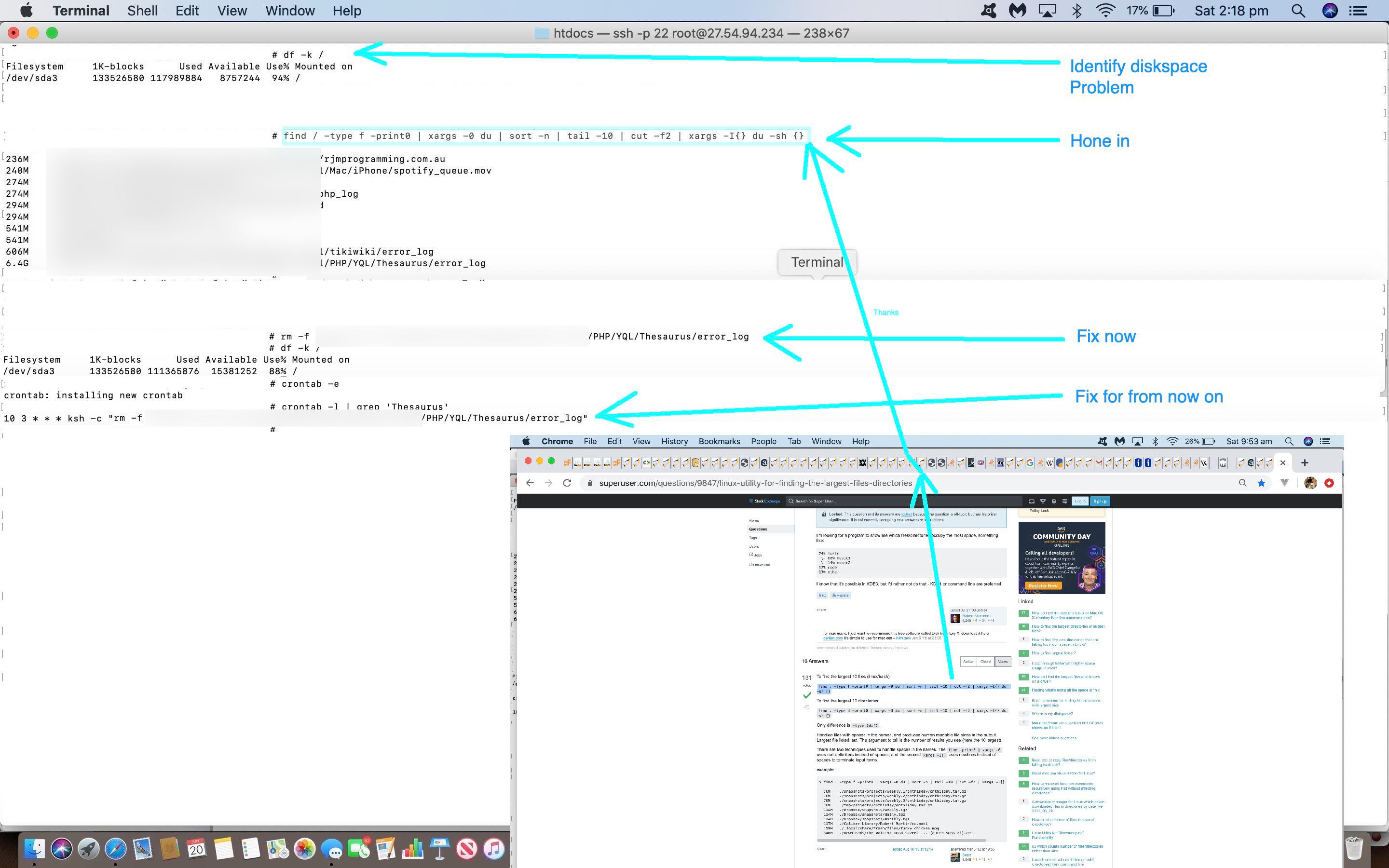 … that latter one raised its-not-so-good-looking head for two days last Sunday (in the middle of the Sydney, Australia day) and Monday (up until resolving around 11am Sydney time). Not that I immediately knew that. Our symptoms of “something wrong” consisted of …

… which is tempting to ignore, and hide the old noggin in the stuff that falls through the hourglass.

Luckily, though, my torpor was disturbed by needing to sftp an image over to the web server to complete yesterday’s tutorial.

Now, it’s inconvenient that the title gives “the general game away” about the source of the issue, but it would be an imaginative operator indeed who could jump to this “even general conclusion” from these symptoms, without getting access to this web server. And on reflection, had we used Power Management to see whether that would have had a chance of fixing the issue, it would have been a waste of time.

So what did we do first on Sunday? Well, we could still log in via ssh and on the RJM Programming web server, went …

… to arrive at “there is an inodes quota running out issue with the RJM Programming web server hard disk”.

So what did we do later on Sunday? We still could, believe it or not, from an already open FileZilla session, delete a goodly number of web server files, which we (recursively) did to get some thousands of inodes to become available again. That left the RJM Programming web server fully functional as we went to “shut eye places”. We gave the web server one task (via our Linux Disk Usage cPanel Heads Up Tutorial) to do for these sleeping hours …

… but it petered out, alas. It is a very intensive “ask”, after all. So this takes us to Monday, where we woke up to …

… back to the original issue, again.

So what did we do on Monday? Well, amongst the research we lobbed onto this useful link, thanks, that got us to go …

… to get a list of files created over the last day. And that was the breakthrough, really, for us, as it lead us to seeing in that list thousands of entries for the filespec …

… and we noticed, after another round of file deletions to be okay, temporarily, again, when going through a few cycles of …

… each list would get considerably longer over the length of time it took to list the previous! Runaway train had us gobsmacked! Eventually, though, we tweaked to “the short term solution” …

… yayyyyy!!! (with a caveat of “just relief for now but must find the ultimate reason”) … but there were some back again on the next … a growing list again … plus the RJM Programming ZenCart eCommerce website came up with error message “WARNING: An Error occurred, please refresh the page and try again.” … mesmerized, we repeated the listings, watching the list grow, until it occurred to us, encouraged by that previous link talking about the error could be related to the MySql ZenCart database, to …

… giving us the long term remedy …

… sanity checked in that “the list” no longer grows!!! And as for the inodes quota issue …

… a lot better, especially as this time it only appears to be getting better (ie. IFree stays roughly the same or gets bigger (with our other crontab remedies we have implemented)). And ZenCart works again. What a relief!

… which can, respectively, be monitored by Linux commands …

On our CentOS rjmprogramming.com.au web server recently we had occasion to do a check of this, and wanted to improve the web server hard disk situation for both measures, picking the /var folder of our web server. So we executed, respectively …

… the latter one being a list of files on /var modified in the last day being our idea to try to see what daily log filing might be contributing big time to hard disk inode usage. And that’s where we found out this way that our Exim Mail Server logs extensively, and that we could do without those in folders off …

We tried the latter of two deletion ideas we show below …

Then the next job was to stop Exim remaking these logs and wish to thank this useful link for great advice here, that led to this advice we give …

You may find this is a web server configuration of interest to you too.