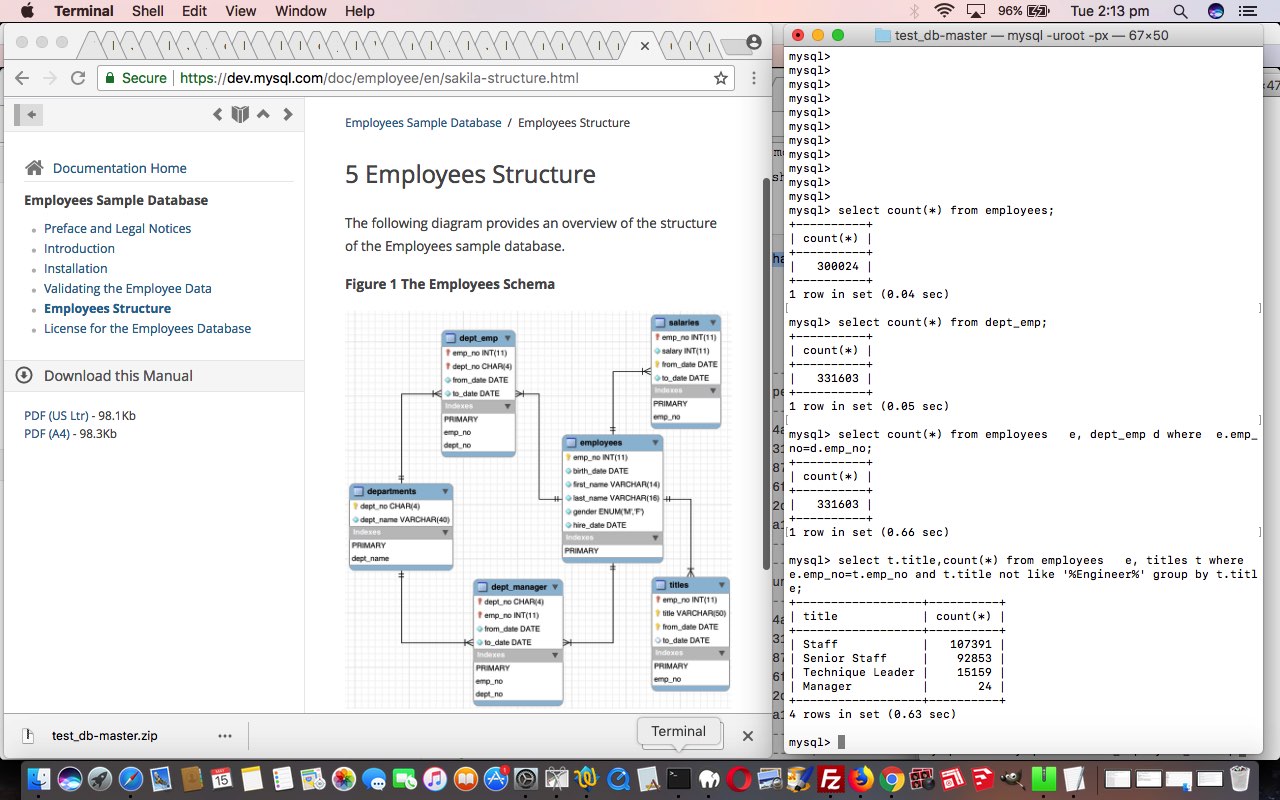 In the past we’ve teamed Python (server side language) up with the MySql (database) via a python module called MySQLdb when we presented Python MySql Circle and Point DataTable Primer Tutorial below. Then, we shared the Mac OS X MAMP local web server’s MySql instance (teamed with Apache and PHP (server side language)) to perform some SQL (of the MySql ilk) regarding the storage of some Circle and Point database tables and data.

Moving on today, we are acting as though MAMP was never installed … what blasphemy! … because, in all likelihood, that is likely to be the case if Python has been chosen as your primary serverside language, rather than PHP … what gall?! …

What port is listening for a non-MAMP MySql installation?

What is the latest Python version as of today?

What links MySql to Python3?

Then we (got more great help and) pieced together Python mysqlemployees.py to create the DDL SQL necessary to create the tables needed to support the MySql sample Employees database. To populate those tables we used MySql’s Employees Sample Database webpage (and associated downloads and other webpages). At the end of today’s PDF slideshow presentation, we show some MySql SQL queries of that Employee Sample Database. 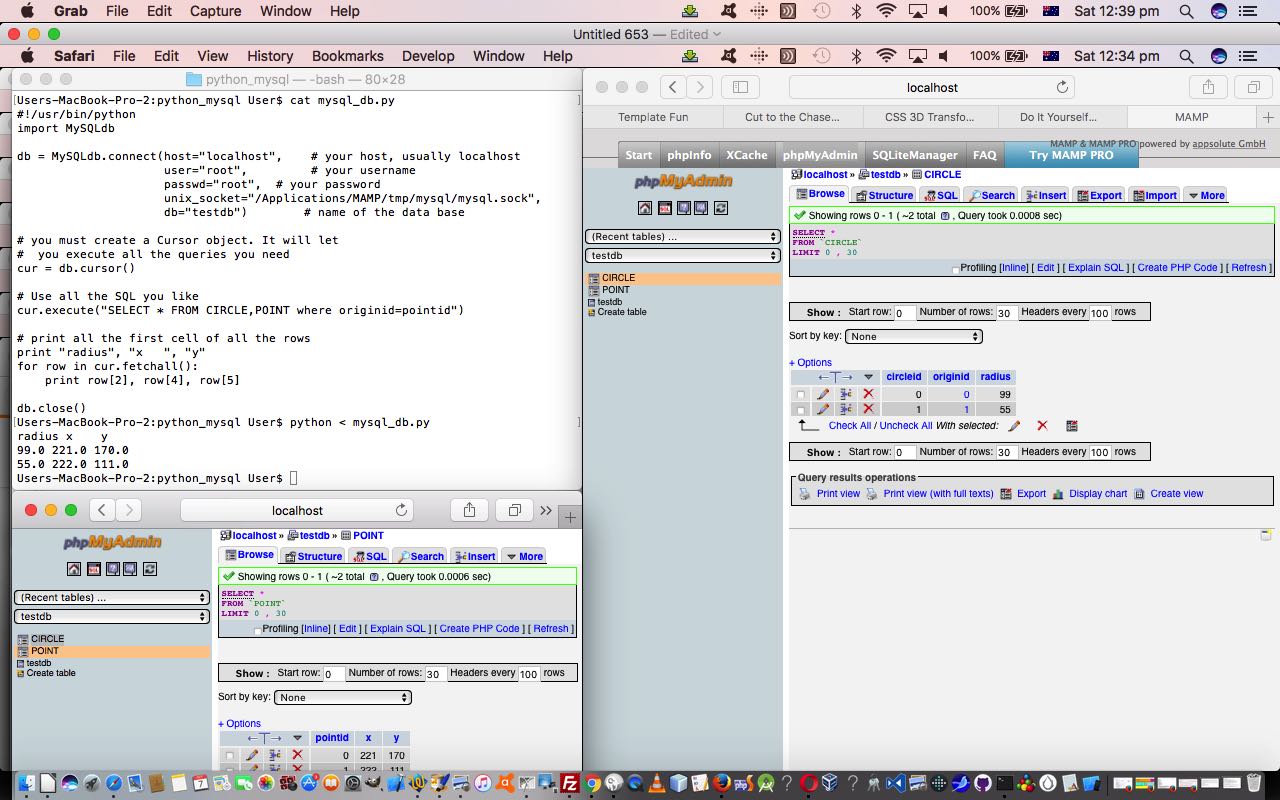 When we’ve talked about the MySql database in the past, apart from going on and on and on and on and on and on about the wonders of the phpMyAdmin MySql management tool frontend, we’ve normally talked about it regarding its “Fred and Ginger” relationship to PHP. Well, Ginger was famous before Fred came along, and who can forget Fred in the Towering Inferno movie, with no Ginger in sight … mind you, can’t remember if there were any scenes with people eating cashew chicken for lunch in that movie?! My point is, and here’s the thing, MySql can be a database for other languages just as other languages can go off looking for other databases, for example, have a peruse of PostgreSQL PHP Tutorial.

Our new teaming today is, if you haven’t guessed it already, Python and MySql. We set this up locally on our Mac OS X MacBook Pro system, and wanted it to live, and not interfere with our beloved MAMP local Apache/PHP/MySql environment, which panned out to be no issue at all, working with those MySql tables featured in Circle and Point jQuery DataTable Primer Tutorial. More, the difficulties came with installing the MySQLdb Python module necessary to make the Python (version 3) code below work …

# you must create a Cursor object. It will let
# you execute all the queries you need
cur = db.cursor()

… also download with mysql_db.py link … via, and resulting in …

So, that install on Mac OS X, for us, as suggested at this useful link, thanks, involved Mac OS X Terminal application’s command line commands …

In our stream of consciousness PDF slideshow we show you this installing and the other tricky bit, that being, the Python code’s MySql connection code, and how we crept up on how to approach that. Along the way you can see phpMyAdmin in action, as the tool to show the structure of the MySql database, and to verify that the Python program outputs agree with the MySql database content. 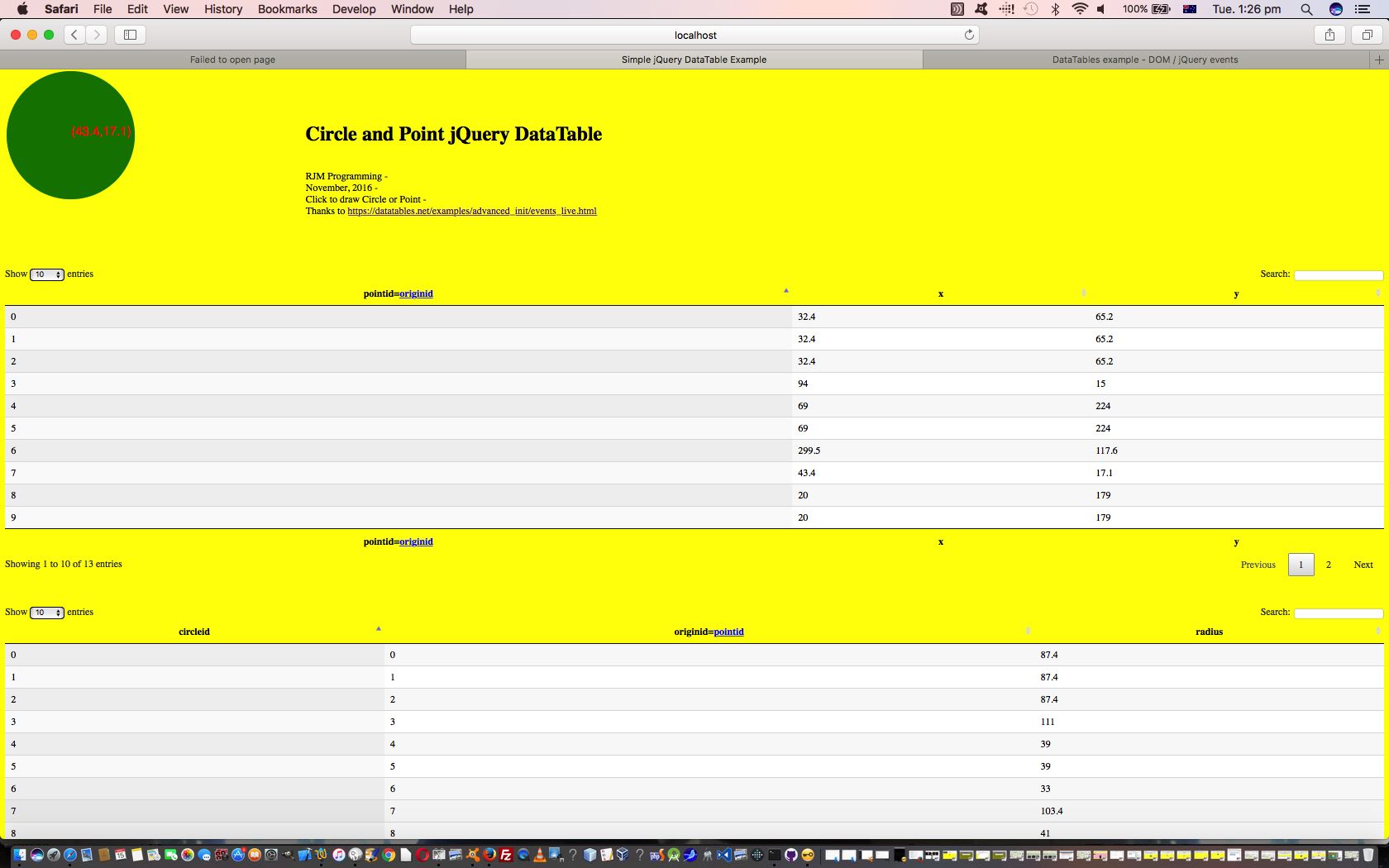 Perhaps you are a reader who has been interested in the “backend” of web application development, traditionally the database side of Information Technology software development. And maybe along the way you were reading when we presented MySql Stored Procedures Primer Tutorial as shown below? Well, today we take its data “thoughts” and funnel that through the brilliant, the stupendous jQuery (Javascript library) DataTable functionality.

For a lot of programmers, we tend to hone in on Data Tables, in a database, as the most latch-able onto-able thing about databases … or maybe that’s just me … anyway, the Data Table is that “thing” in a database consisting of data presented in …

… like you are probably familiar with regarding spreadsheets … ie. the letters up the top are like “columns” and the “numbers” on the left hand side are like “rows” with respect to what we’re talking about above. As you can tell from this, a spreadsheet worksheet is a lot like a database Data Table.

Continuing that spreadsheet analogy, you spreadsheet enthusiasts probably have seen the concept of multiple worksheets within the one spreadsheet? Well, that is like our scenario today where we have two Data Tables called …

… and for both tables we’re going to have these numerical “count” indexes, as is so common in RDBMS work, because computers can sort faster and join things faster with numerical data. The trade off, as for us, if you imagine it, is, that there can be Data Redundancy, or “inefficiency” in that as far as the “Point” Data Table goes, we may have the same (x,y) co-ordinate set existing multiple times, and we’ll define a unique “row” (or record) for both of these, yet, you’d have to agree, that this is, perhaps inefficient and wasteful. The upside, though, is it is not making my head hurt, because there is a one to one relationship between a “Point” (Data Table) row and a “Circle” row, making the Javascript logic we perform, and you can see with circle_point_jquery_datatable.html less involved with what we are doing today. And what is that, pray tell?

We’re going to let the brilliance of jQuery display that aforesaid mentioned data in its inimitable style … such panache! And then we are going to add “row” click event functionality to draw the point or circle of that (Data Table) row be drawn up the top using HTML SVG graphics. You can also have “column” click events, but we choose “row” clicks to be interested in, because on a row click, the whole “.innerHTML” of that row’s (HTML tr) element is accessible in the logic, and so …

Now in all this, we talked about the “one to one correspondence” numerical indexes, but in practice to make this more robust, in case a superfluous “Point” row is deleted by a do-gooder user later down the track, you may have noticed that all along, the second “column” of the Circle (Data Table) (even though called “originid”) points back (ie. is the same value) as the Point table’s first (and index) column (called “pointid”) and these “join” fields (another name for “column” can be “field”) can still gather apples with other proper apples, in that scenario. But today, that is overkill, because there is no “delete” row (or “record”) functionality in our web application today. That web application you can try for yourself with this live run link. 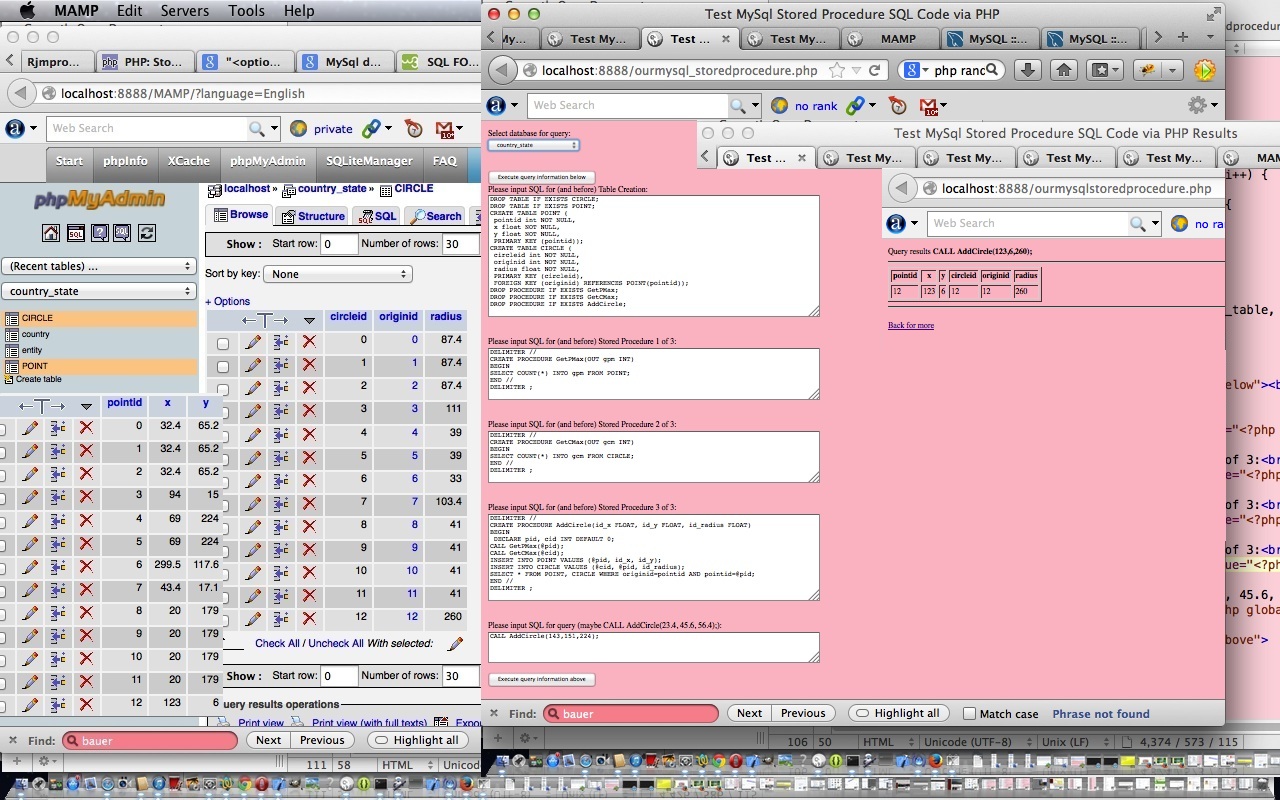 Today’s tutorial follows up on phpMyAdmin interface to MySql and PHP Primer Tutorial in that we again use the brilliant phpMyAdmin to oversee the results of some PHP code which uses MySql calls to create tables called POINT and CIRCLE used to store information defining a circle, and then it creates three MySql stored procedures in the database to help add circle data with the single MySql statement that goes CALL AddCircle(x, y, radius); via the use of those stored procedures. Let’s see below what Wikipedia says about Stored Procedures generally.

A stored procedure is a subroutine available to applications that access a relational database system. A stored procedure (sometimes called a proc, sproc, StoPro, StoredProc, sp or SP) is actually stored in the database data dictionary.

Stored procedures are similar to user-defined functions (UDFs). The major difference is that UDFs can be used like any other expression within SQL statements, whereas stored procedures must be invoked using the CALL statement.[1]

Here is some downloadable PHP programming source code which shows the results of the MySql SQL requests made and can be renamed to ourmysqlstoredprocedure.php as required.

Here is some downloadable supervisory PHP programming source code which gathers the MySql SQL requests made and can be renamed to ourmysql_storedprocedure.php as required.

If you want to develop your own live usage (have provided a live usage link here which will not work but you can use if you are a beginner, to get used to mysql errors, which will occur after you hit either button of the link (these errors indicate bad MySql connection details which are the same reason the database dropdown is not full of options), or you can use this link to see the raw MySql SQL involved in piecing this tutorial together) of these two PHP source codes then you could fix up the hard codings for MySql host/username/password up the top of ourmysql_storeprocedure.php (where you may notice that the default host in the code is localhost:8889 which is the default host string for MySql (ie. port 8889 is used) when using a MAMP (Mac laptop) local web server (which uses localhost:8888 as its local “domain name” for http usage)) or you can keep the same code and use a URL like:

Previous phpMyAdmin interface to MySql and PHP Primer Tutorial is relevant and shown below. 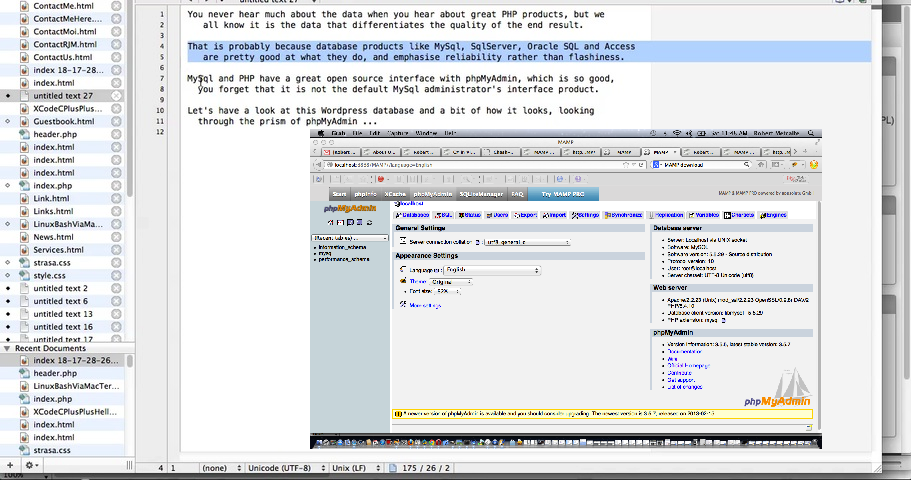 You never hear much about the data when you hear about great PHP products, but we
all know it is the data that differentiates the quality of the end result.

That is probably because database products like MySql, SqlServer, Oracle SQL, Advantage and Access
are pretty good at what they do, and emphasise reliability rather than flashiness.

MySql and PHP have a great open source interface with phpMyAdmin, which is so good,
you forget that it is not the default MySql administrator’s interface product.

Let’s have a look at this WordPress database and a bit of how it looks, looking
through the prism of phpMyAdmin …