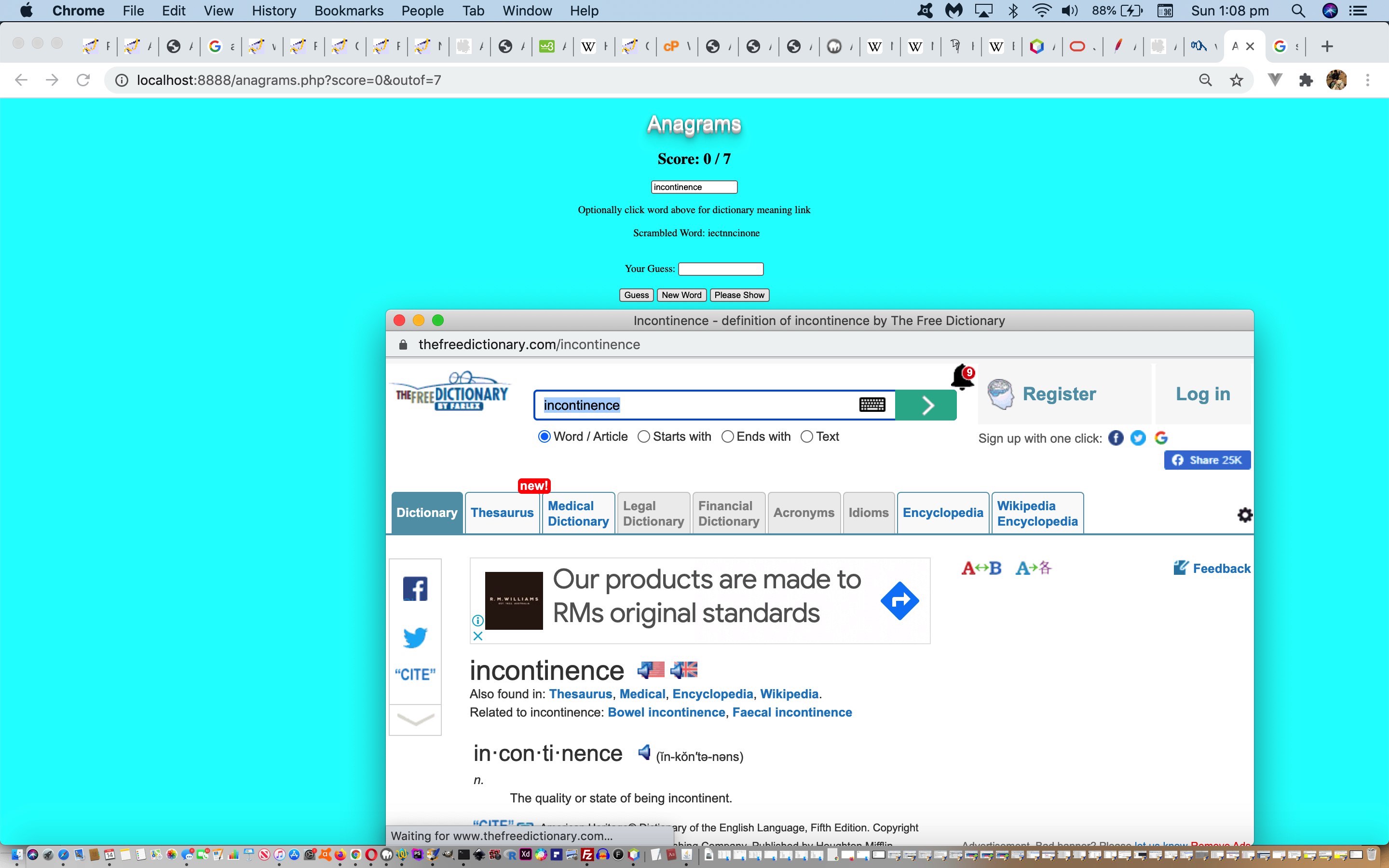 We like the design and basis of the NetBeans Java Swing Anagrams Tutorial‘s Anagram program. So, today, we’re developing a PHP version of that 10 to 12 letter word Anagram word game.

As per all the inhouse PHP word games we can think of, the Linux (or macOS) “/usr/share/dict/words” inbuilt dictionary can come in handy here for the picking of words to ask the user about after presenting them with a Scrambled Word presentation to work off.

As you try today’s PHP anagrams.php first draft live run am sure you’ll agree with me we could think, into the future, of …

… and though it needs further thought, we’ve tinkered away at the first thought above, by trying to ensure our “/usr/share/dict/words” word gets a guernsey with our favourite free online dictionary, The Free Dictionary, thanks.

The last time we talked about the NetBeans IDE in relationship to Java and Swing we dealt with NetBeans JavaFX Swing Primer Tutorial as shown below.

Today we use a sample NetBeans project and add a little functionality to create a desktop Java Swing application for a word game about “anagrams” … jumbled letters you can turn into an English word … English is the language of the Java WordList used … hence the “English” qualification … Bachelor of Javlish … chortle, chortle.

Word games like this can be used by ESL teachers for the teaching of vocabulary, an important part of improving in any language.

The extra bit of functionality we add to the sample data is that we optionally allow you to enter up to five letters that should happen in the word chosen (if this is possible within 14000 choices) to “tie it down” so to speak.

As per “quite often” the usual Java Swing GUI suspects come into play … JFrame, JLabel, JTextField … but this time, also, a JUnit test class (the tutorial goes into the install of the plugin required for this, if not already installed). Are you on your toes yet?

So below we have some code that hopefully interests you …

The last time we talked about the NetBeans IDE it was with C, C++ NetBeans, gdbserver Debugging Primer Tutorial as shown below, and quite some time back. NetBeans for Mac has moved onto version 8.0.2 and today, wanted to show you a bit about the look of that and create a very simple JavaFX application that is like a desktop JApplet. You’ll have heard me a bit sad about the difficulty with Applet usage these days where we did the tutorial called Java Swing Line Graph Primer Tutorial and those sentiments are still true, but JavaFX is not just about JApplets, but is a lot about desktop GUI ideas, and lots of things you use for a JApplet can be applied today, because we are creating a NetBeans JavaFX Swing project, and this Swing functionality will also get you a long way down the track to writing Java desktop GUI applications.

Today we also show how a Button can be placed in front of another Button, especially when you use the “frame.pack()” method, and how both Buttons still function. We also use a StackPane today, to which we “add” the two Buttons and a Text object, and today we also use a JFrame object, as we often do with Java Swing work.

NetBeans 8.0.2 looks good and co-exists fine with Xcode (we have 6.1.1), which may be an important consideration for you.

A full NetBeans install will allow you to organize PHP projects, which is quite a good feature, if you feel like your PHP needs reining in … woahhhhhhhhh!

So, what are the thoughts about “getting into Java” these days? Personally, would like to keep in touch with any language that can go across so many platforms, and that I feel (if installed) you could write a quick and functional command line piece of code that has that simple classic arrangement …

… only this simple for the simplest (non-package) scenarios … and, as such, doesn’t have to have complex “make” files. So, for me, Java will probably always be a consideration, let alone to do with its role in Android mobile development, and will leave you with a recap of today’s tutorial and some thoughts that Google puts to the top for such a discussion, for your perusal …

… and here is a useful tutorial for today’s discussion … see you soon, hopefully …

… and lastly, here is this tutorial’s Java downloadable programming source code you could call JavaFX_Swing_Application.java … am really going now.

Today’s tutorial is about debugging C (and C++ can be done too) using the gdbserver plugin in the NetBeans IDE, and its progression brought into play issues regarding the upgrade of Xcode 4 to Xcode 5 (and Mac OS 10.7.5 to Mac OS X Mavericks 10.9.1) made here (to facilitate IOS 7 development in Xcode), and the whole scenario has come about as a consequence of Xcode and its Command Line Tools Primer Tutorial in the sense that the installation of Xcode Command Line Tools (in earlier Xcode versions … think maybe less than 4 … “out of the box” it lived with C and C++’s great gcc compiler … have talked about this before … raved perhaps??!!! … anyway … that went away with the later versions … but you can get it back) “closes the circle” on the separation of C and C++, at least as far as NetBeans is concerned, so that we can use the installed Xcode Command Line Tool gcc compiler for C work and use the GNU compiler for C++ in NetBeans … cute, huh?

The bottom line is, when you upgrade from Xcode 4 to Xcode 5 the command line functionality will disappear, but you can resurrect it, and we bring your attention back to the tutorial below and that great link here.

So all this just gets us back to square one with NetBeans, and the first slides of the tutorial may seem a bit irrelevant to gdbserver, but they are showing the restoration of the relationship Xcode and NetBeans can have if the Xcode command line functionality is intact (but read more about this in the tutorial below). By the way this broken record is available on iTunes (chortle, chortle).

Okay, back with debugging for C (and C++ also) in NetBeans using gdbserver. We, in this tutorial, only show (a very simple example of) local debugging, but what about remote debugging (read more here … you might need to research further?) … so thanks to Egor Ushakov for this great plugin.

Debugging in gdbserver or gdb (or most debuggers) uses terminology like breakpoint (place where you stop), watch (find the values in variables and structures), step into (progress forward one line of code), step over (step over some code), continue (let debugger run the code to the next breakpoint) and restart (start the debugging session again). So the sensible first thing before you start a debugging session is to imagine the best place to position that first breakpoint (but bear in mind the program may have other ideas, and that you should be ready for the program to actually lob on a number of different possible places, (especially) if your debug place of interest is well into the execution sequence of your program). Why only worry about the first breakpoint … well, that’s true … set the others if you can … but sometimes you can only do this on getting to that first break, and either/both possibilities of use are okay with gdbserver or gdb or any other debugger I’ve ever seen. You can leave the decision for what you watch to that first breakpoint time, as you wish, also. Anyway, enjoy the tutorial. 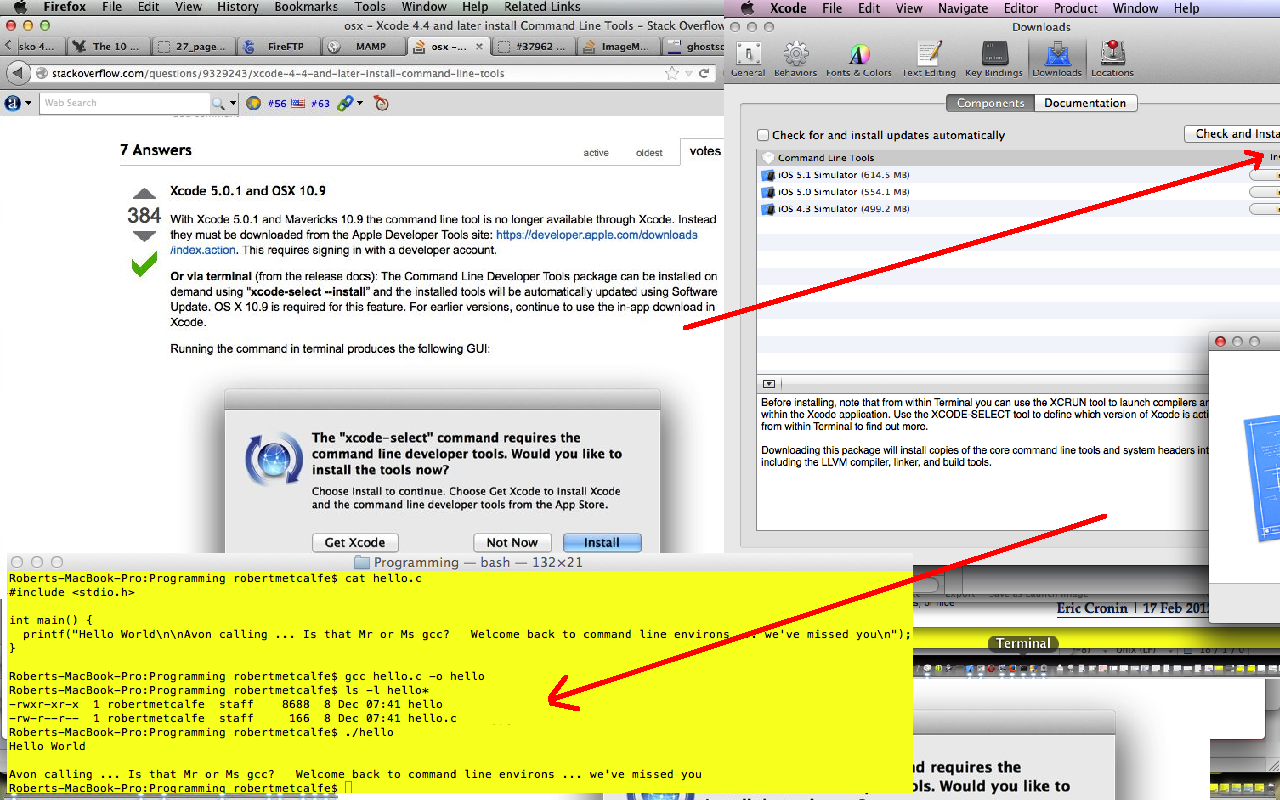