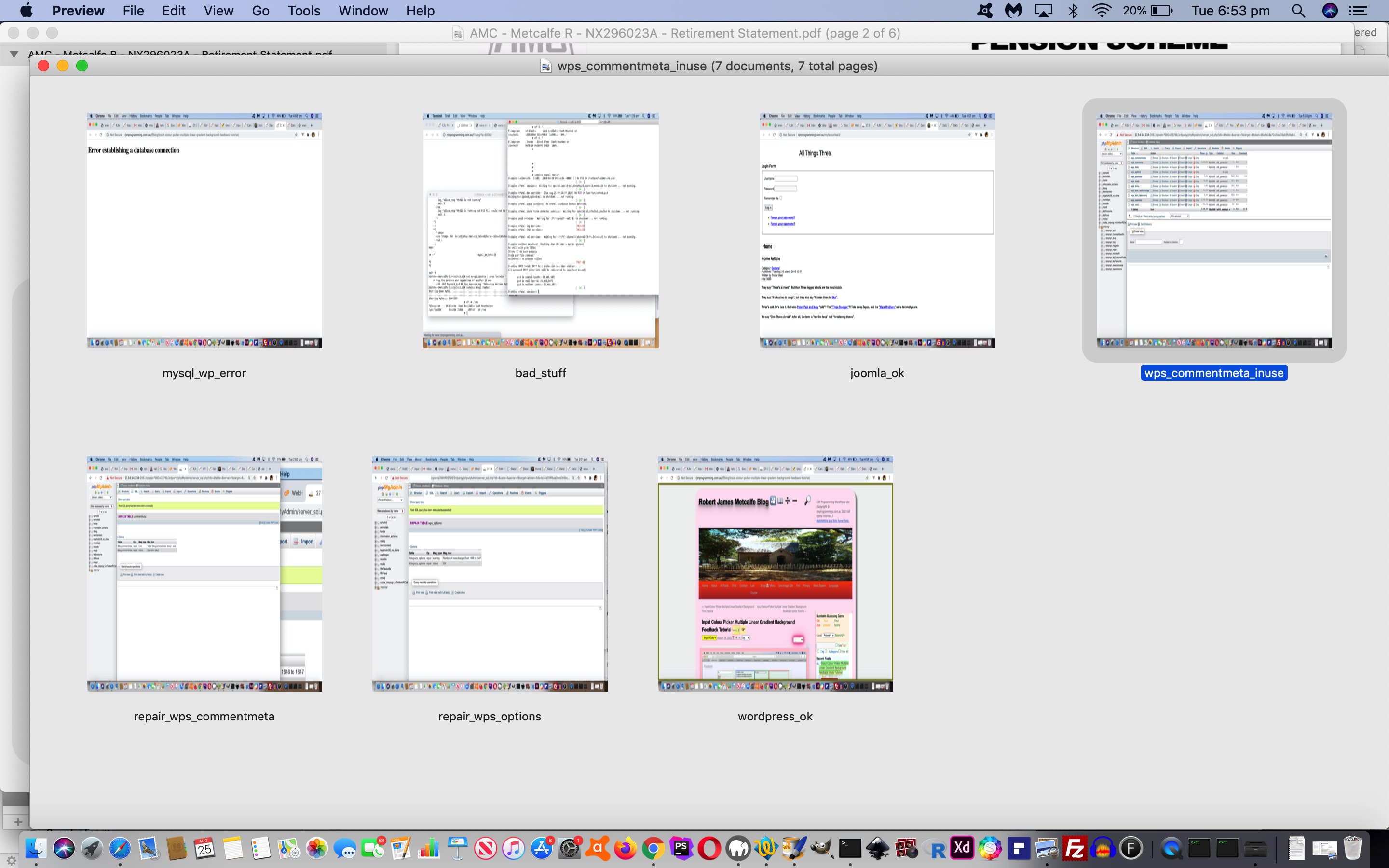 If you read MySql Down Thinking Followup Tutorial below you’ll get the gist of how our rjmprogramming.com.au web server’s Linux Watchdog works trying to …

This strategy works for the most part, but …

You see, it’s all well and good me telling you to do “this that and the other” but if you run an Apache web server with limited resources (and so a limited MySql connection pool), it is quite possible that on occasions it will become …

… but what if a problem develops in another of our MySql products, like ZenCart? Yes, it panned out symptoms a lot like those of …

Solving this took hours, first working it to get access (we’ll outline below for ssh, sftp, Control Panel, Power Management), but we probably could have saved two hours by realizing that half way along we had a scenario whereby WordPress errored out as above, ZenCart errored out in a similar way to Troubleshooting CentOS Web Server Disk Zencart Issue Tutorial but Joomla (also MySql) did not error out. It didn’t tweak with us then and there that this meant our Linux Watchdog “restart of all MySql” approach was not the best approach, and what would have saved time would have been to go straight to phpMyAdmin looking for “in use” MySql database tables to “repair”, instead …

We hope this snapshot into some of this troubleshooting might be of use to some readers.

Previous relevant MySql Down Thinking Followup Tutorial is shown below. 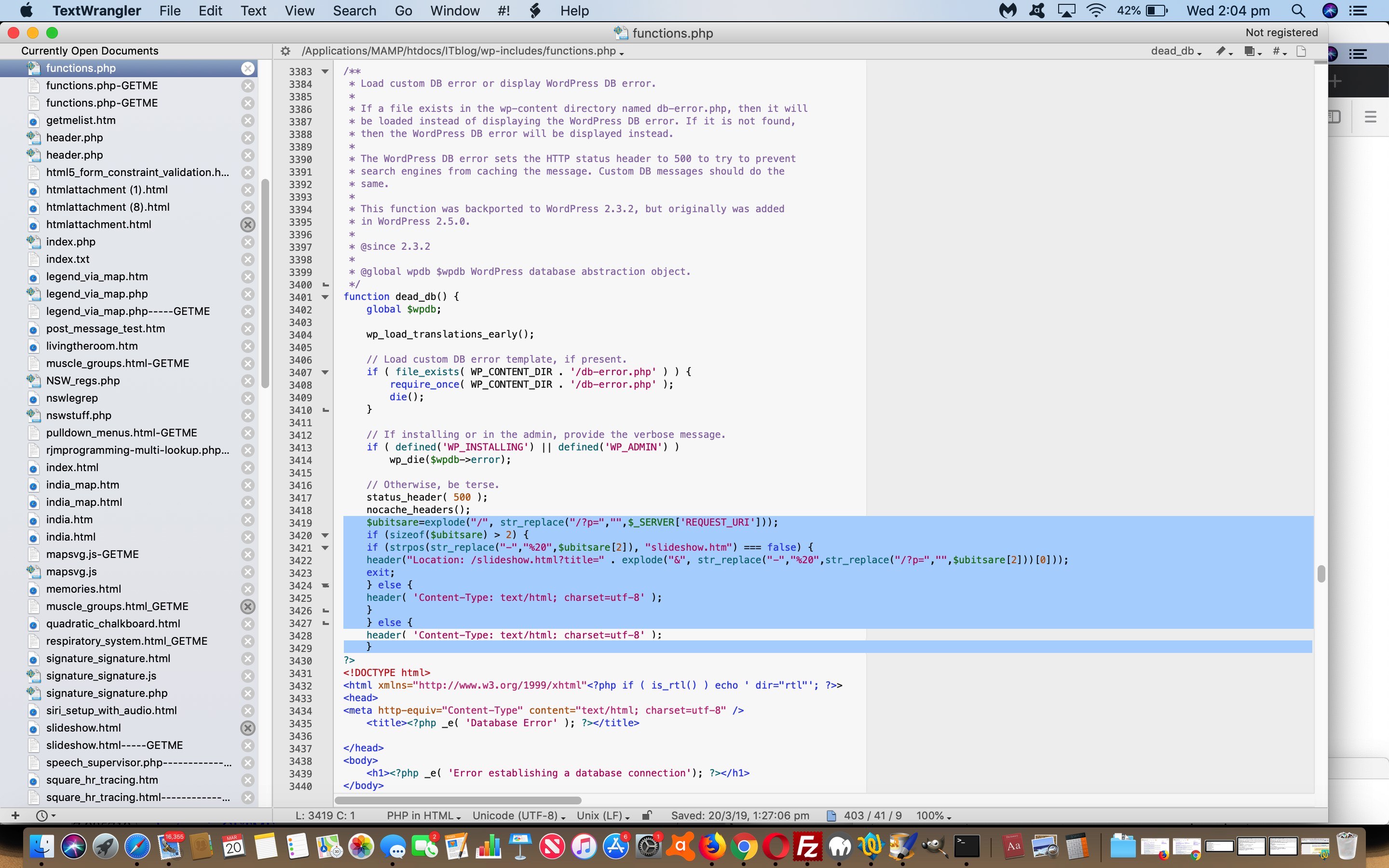 When we discussed Linux Watchdog Primer Tutorial in that very generic fashion below, we were being that … generic. Today we turn to specifics in that regard. On the rjmprogramming.com.au domain we use a …

… on the understanding with that latter thought, that we put into play today for a WordPress 4.1.1 blog, we realized we needed to intervene in …

… in the emboldened code intervention as below …


… where the redirection to /slideshow.html effectively “Cuts to the Chase” for the gist of that blog posting you never got to, as MySql is currently down.

Notice how specific the actions can be when you write code “dependent” on another software component, as distinct from the “watchdog” approach we often want to be “independent” in its thinking.

Guess this begs the question? How did we work out where to intervene? We just got to folders on the rjmprogramming.com.au web server with the WordPress (Codex) software and went (showing you the one that yielded the nicest result for us) …

pwd // and we are at [DocumentRoot]/ITblog
cd wp-includes
fgrep 'Error establishing a database connection' *.php 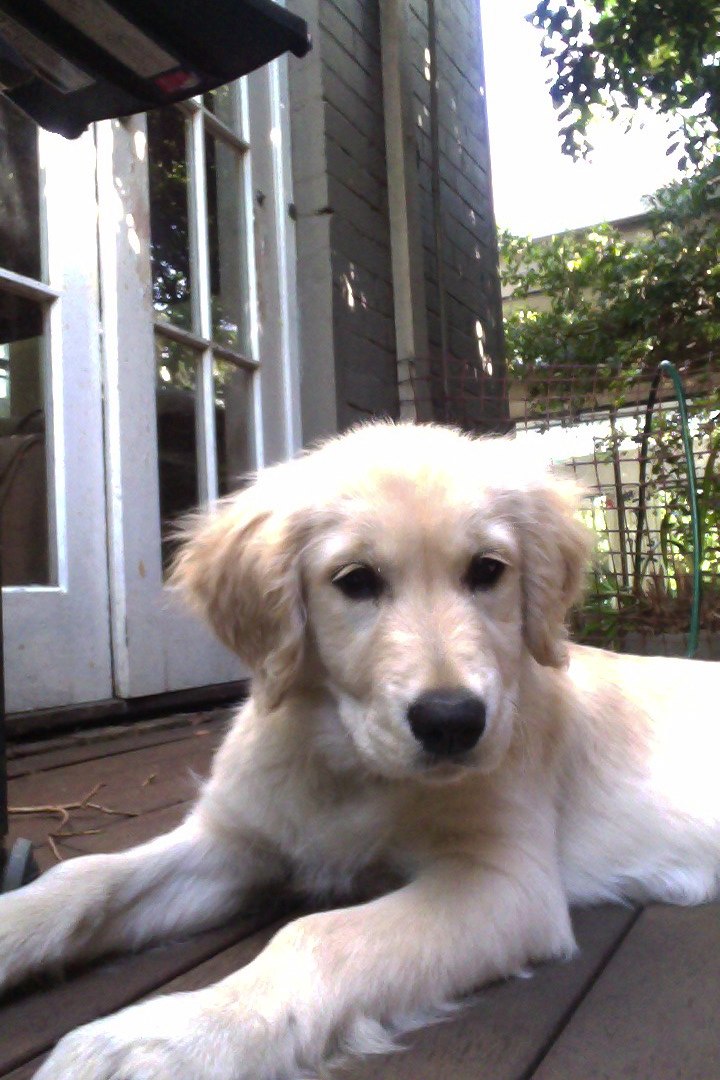 Do you have a computer operational problem? What the … what is that humanoid on about? Well, is there a computer operation you have to do routinely, to fix an ongoing problem, that relies on your personal intervention that, one day, you’d like to not have to worry about, or better still … you usually intervene, but would like a backup approach should you get sick and can’t do it … here’s where you need Fido a watchdog

… am not recommending a Golden Retriever, unless you want your process licked rather than attended to? (had you forgotten this was a question, Cedric Linux Nala)? …

Why is bellybutton fluff blue? But we digress, or at Buckingham Palace one digresses.

Right, back at watchdogs, there are schools of thought …

My view is that, if the underlying process would take years to understand or if it is written in legacy code, I’d go more with the former idea, especially as there is delight in creating a really good watchdog (training one? not so easy) … it can be really hard to do … for this reason cannot give code here really, because there is no “out of the box” that is a responsible approach to advise … you have to study the issue and cut it into its components, unit test the solutions to the components of your watchdog solution, and retest with the interactions of those components. However, this is a coding enthusiast’s view, and is a bit short-sighted, perhaps. In any case, what will save the day is that this decision will probably be made for you by an operations expert, if you work in a large organization.

Some other watchdog considerations should be …

Here is an example. You have an overnight batch process run, and it falls over at a certain point, and you get paged at 3 or 4 (it’s bound to be AM). It has been tentatively decided you might want to create a watchdog … what are some considerations …

The title of this tutorial mentions Linux but generic thinking like above covers other operating system thought patterns, but there are some Linux (or Unix) tools that are great Linux commands that we should point out … thanks to Hscripts.com and CyberCiti.biz for this …

And here are some of the practicalities of a watchdog …

So why was this posting called a tutorial? Well, there’s some homework. You see there are these Daleks, and we sort of need to know when they’re going to invade Earth again, and Dr Who is not always available, so, was wondering, if it wouldn’t be too inconvenient … if you wouldn’t mind writing that watchdog to detect a Dalek invasion and shoo them off … 6 hours … okay?