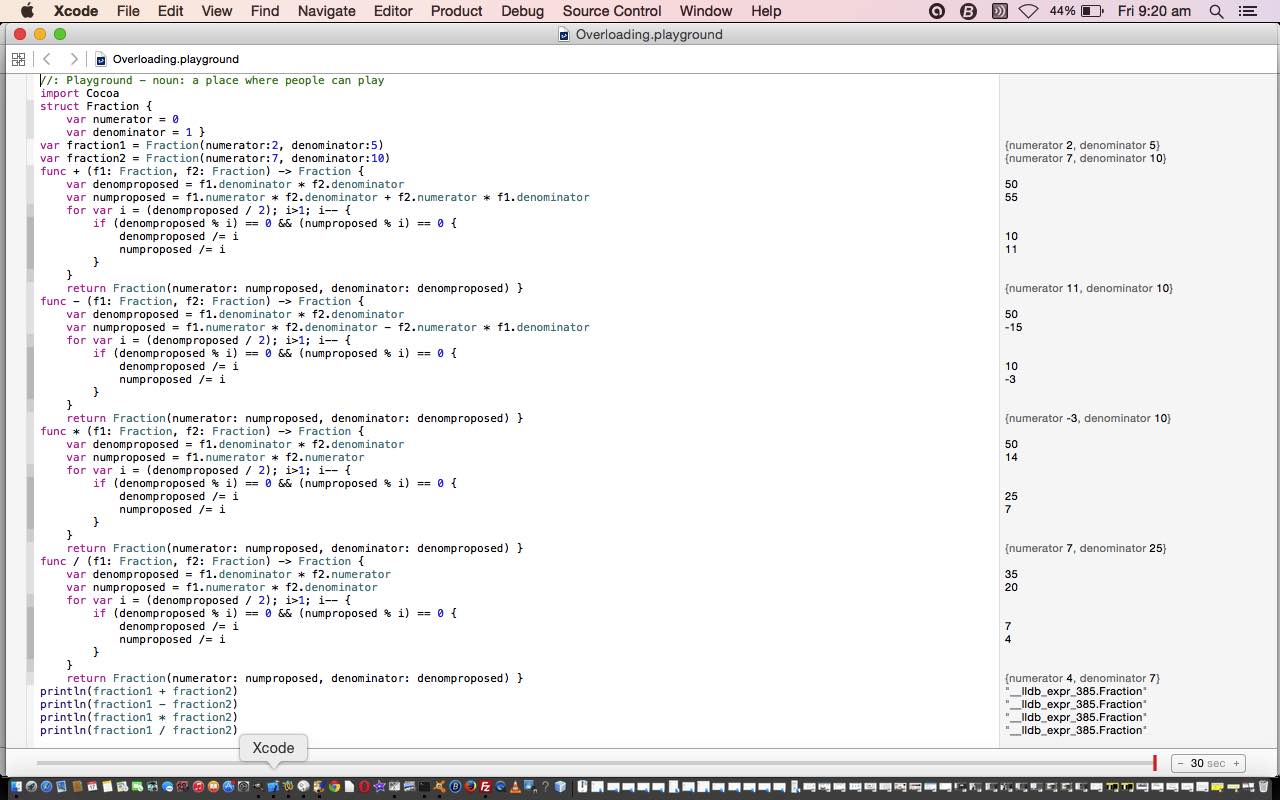 With more inspiration from Swift Fundamentals The Language of iOS Development by Mark Lassoff (ISBN 9780990402053), we continue on from yesterday’s Swift Dictionaries and Arrays Primer Tutorial as shown below, by talking about Operator Overloading today, we touch on some of the following elements of the Xcode (IDE) use of the Swift language (the Language of iOS Development) …

… as we mentioned yesterday, in Xcode you can test such Swift functionality in the “Playground” (functionality) section.

So take a look at today’s Swift programming source code you could call Overloading.swift where we create a “struct” for the concept of a “Fraction” (as we may have learnt in mathematics at school) as per …

… and then in the program we initialize two such “Fraction” structures …

Now a computer program presented with this “numerator over denominator” concept of a “Fraction” won’t automatically know how to add two of these, or take one from another, or multiply two together, or divide one by another (though it will for the basic numerical data types, and the Operator Overload functions reduce calculations to these basic numerical data types which are the same as the data types of the “members” of the “Fraction” structure) … you have to show (the computer how to do) it. So we write code to show the computer program how you + – * / fractions by using Operator Overloading functions to define this … and here is the one for add, or “+” …

… quicker than we could have done it at school, though school comes back into it working out how to write the code.

Hope some ideas spring eternal for you reading this tutorial, and hope to see you back tomorrow.

… in Xcode you can test such Swift functionality in the “Playground” (functionality) section.

You see the results of your coding as they build up over to the right of the Xcode window, pretty much instantaneously. To “drill” down to results of a loop click the “Value History” round buttons, where this takes you to graphical representations of the data … quite cute really.

So these are some of the bits and pieces of knowledge you can develop further to build up ideas for the creation of iOS mobile applications, which you may eventually want to sell on the Apple App Store (eg. for Australia).

You may wonder with the arrays (in section-1.swift) why there is a separate “tophomeawaypoints:[String: Int]” dictionary and “bothomeawaypoints:[String: Int]” one as well (also for “top8:[String]” array and a “bot10:[String]” by association). Well, this was done, really, following the advice of the Swift interpreter, saying that the structure was “too complex” to have the one dictionary and one array here.

So take a look at today’s Swift programming source code you could call section-1.swift where we analyze the AFL 2014 Home and Away Ladder hoping that Collingwood has a better 2015!