Since the days of Mac iPhoto Primer Tutorial the Apple photograph storage wooooorrrrllllddd has coalesced into the Photos app on both MacOS and iOS.

In this Apple environment photos can be shared in iCloud …

The best place for all your photos, files and more.
iCloud is built into every Apple device. That means all your stuff — photos, files, notes and more — is safe, up to date and available wherever you are. Everyone gets 5GB of free iCloud storage to start. And you can upgrade to iCloud+1 at any time for powerful new features and more storage.

This is great for storing across Apple devices. It can also mean a device out and about, rarely, can discombobulate another user working a device sharing the same iCloud storage albums, and a “Your iCloud storage is full” scenario might start happening for no apparent reason. You might work your device doing the “double shuffle” …

… but that may not relieve your issue, with copies of these photos, perhaps, existing on other devices sharing the same iCloud area of storage. Is there a place to attempt photo (and video, by the way) deletes across all the relevant devices sharing this same iCloud storage area? Yes, there is, logging into …

… via your Apple ID (the key to any individual iCloud device group of Photos app photograph and video media storage area) is that place.

Once there, and we assume you know about this “double shuffle” Photos app business, leaving it out of today’s animated GIF presentation, follow the same steps as above (after you click/tap iCloud.com’s “Photos” main menu button), except under the iCloud auspices to be seeing the whole picture here (ie. all relevant devices are managed in this one session), relevant to scenarios involving several Apple devices using Photos app storage areas referencing the one Apple ID. 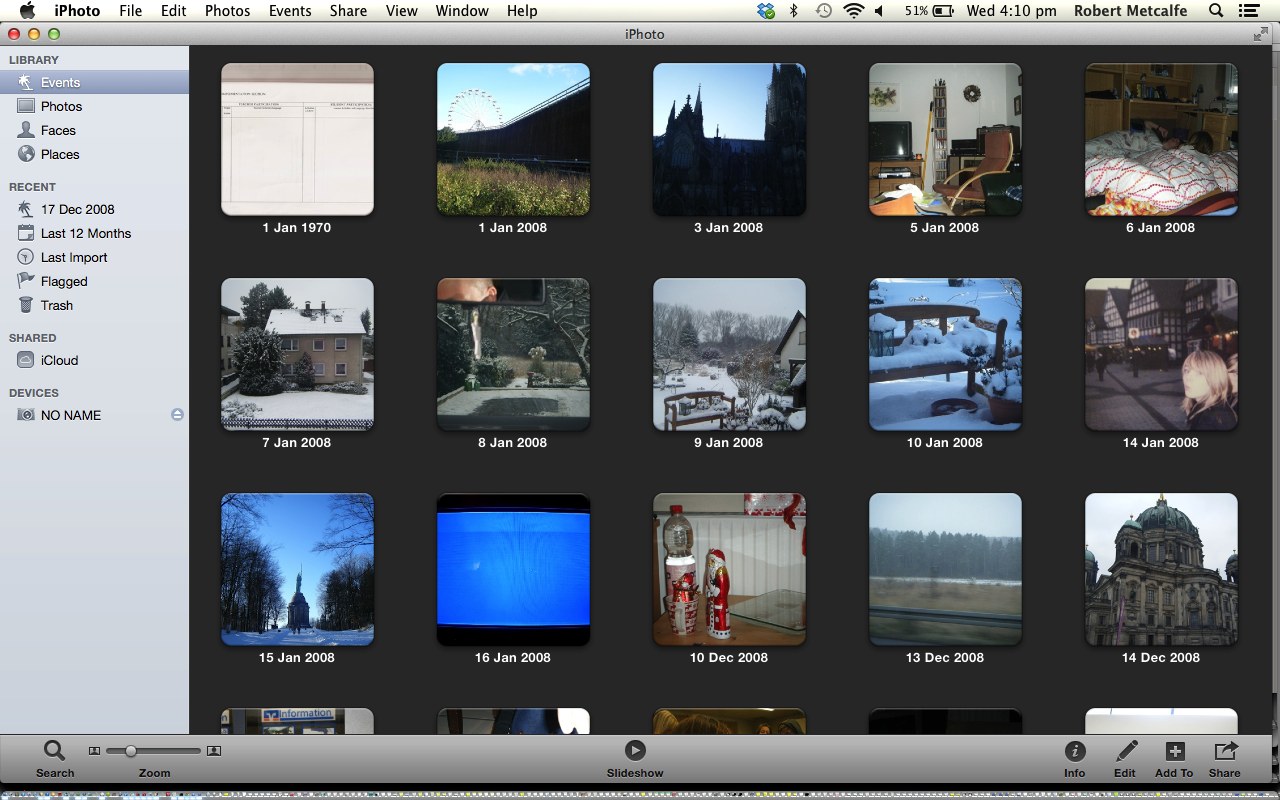 The Mac OS X iPhoto application does a great job of storing your photographs (on the Mac laptop’s hard disk) that are:

It blows my mind enough just to think of the great way it imports from the options that involve a memory card. The blowing mainly derives from its organizational “smarts” if you have been one of those brilliantly organized people who accurately set the date and time on their digital camera. This allows iPhoto’s functionality to compartmentalize the photos by date as one of its “Events” and this is a really helpful feature. So today’s tutorial shows the ease with which a choc-a-block memory card can be very quickly imported into iPhoto within minutes.

The Mac iPhoto application can create slideshows and shares with iCloud, email, messages, social media and Flickr. Let’s see what Wikipedia says about this wonderful application.

iPhoto is a digital photograph manipulation software application developed by Apple Inc. and which used to be included with every Macintosh personal computer as part of the iLife suite of digital media management applications. First released in 2002, iPhoto can import, organize, edit, print and share digital photos. In Mavericks, rather than being included in OS X, iPhoto is available from the Mac App Store.

Here is a link to iPhoto information from Apple.