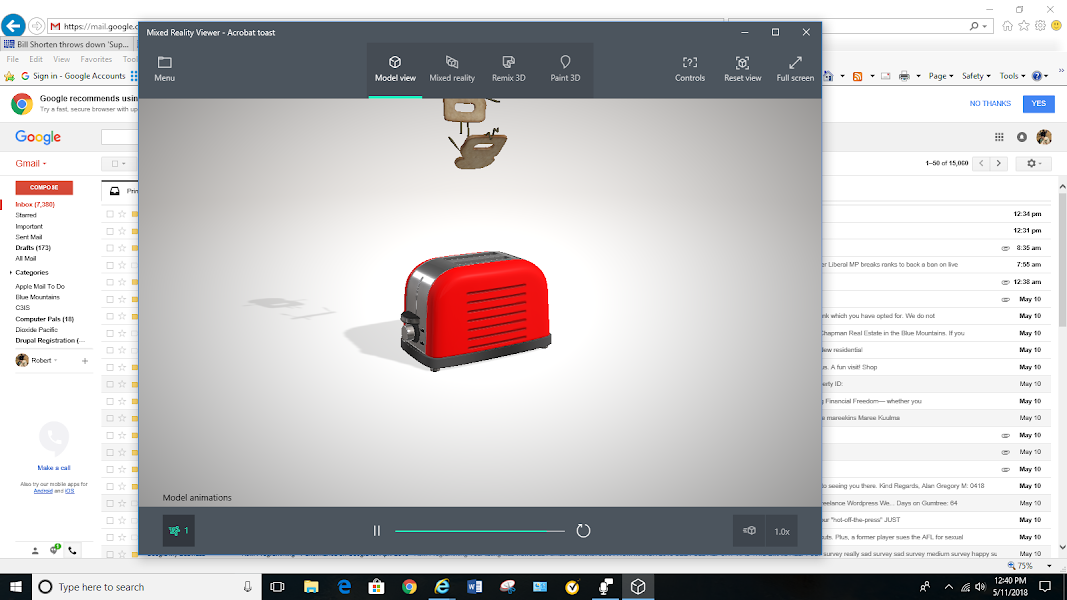 Virtual reality applications have been around for quite some time now, especially regarding gaming usage, but what is “mixed reality”?

Mixed reality (MR), sometimes referred to as hybrid reality,[1] is the merging of real and virtual worlds to produce new environments and visualizations where physical and digital objects co-exist and interact in real time. Mixed reality takes place not only in the physical world or the virtual world,[1] but is a mix of reality and virtual reality, encompassing both augmented reality and augmented virtuality[2] via immersive technology.

Not “being into” gaming myself, have not really gone out to explore much regarding virtual reality, nor “mixed reality”, as a result. Looking through some Windows 10 menus the other day, I came across an interesting suite of Mixed Reality applications …

… the first of which the PC I was on was not up to scratch with the hardware requirements. However, the second one was accessible and amusing to me and some students in the class with some excellently rendered virtual reality sample presentations, the toaster having them in hysterics.

Have a read of Microsoft‘s Mission Statement regarding the https://blogs.windows.com/windowsexperience/2018/01/08/windows-10-tip-get-started-mixed-reality-viewer-app/’>Mixed Reality Viewer …

As part of our mission to bring 3D and mixed reality to everyone, we launched Mixed Reality Viewer with the Windows 10 Fall Creators Update in October. With Mixed Reality Viewer, you can see 3D objects – either from the Remix3D.com community or your own creation from Paint 3D – mixed into your actual surroundings through your PC’s camera. It’s easy and fun, and all you need to get started is a device with a camera running the latest Windows 10 Fall Creators Update.
With the Mixed Reality Viewer, you can experience the power of 3D and mixed reality, no headset required.

Virtual Reality is not all fun and games of course. Its use in simulation can be very useful in industries such as aviation and health. And it is very important in the field of robotics … “out standing in its own field”.

Of course, the application of Mixed Reality (or Virtual Reality) in a home environment, and online, can be asking a lot of your …

These “realities” represent the future. But which one?!