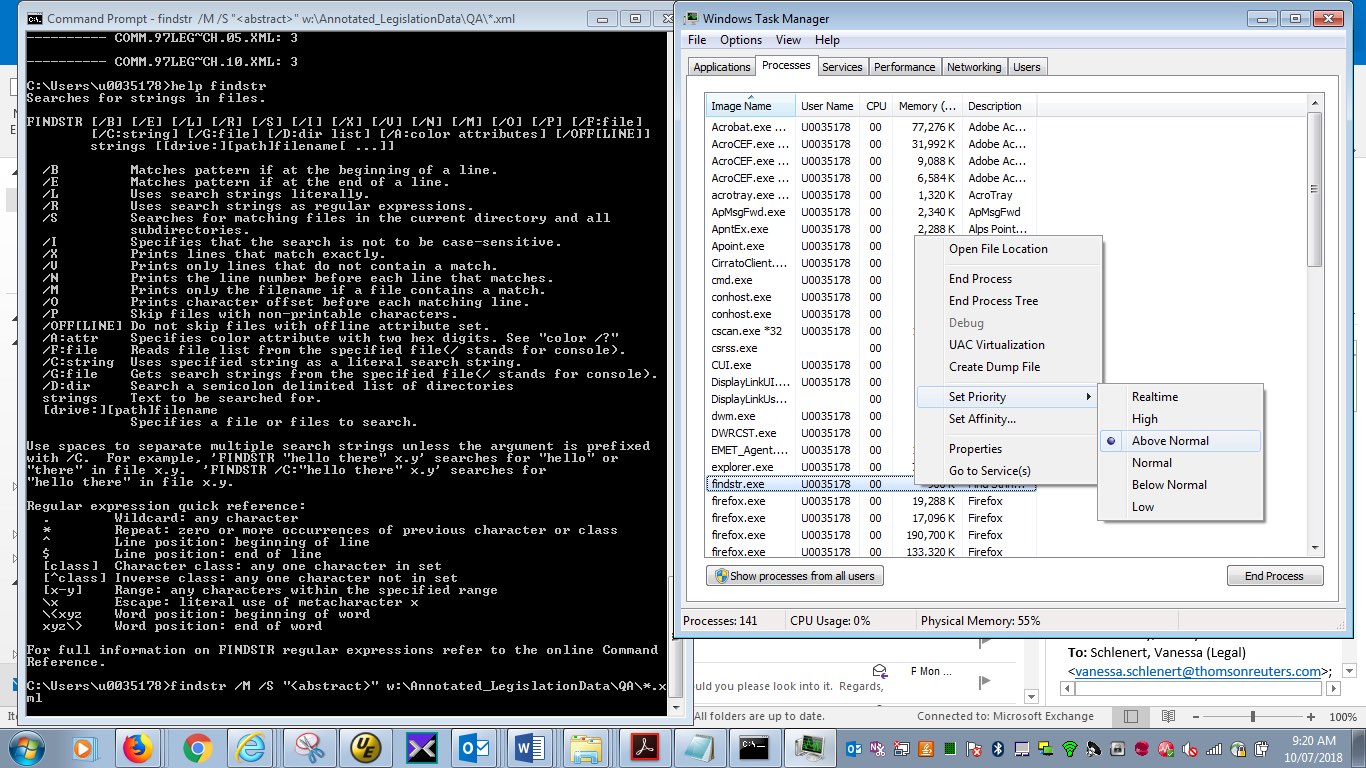 When we presented Windows Task Manager and Control Panel Primer Tutorial earlier on we didn’t show Task Manager’s talent to allow for some Windows task priority setting. This task priority setting is not always a good idea, but if you are doing a sizeable job on a network drive, such as finding a string in a directory tree of some size, it can be useful, especially if the job is being run remotely. Say this, because I believe you get into less trouble upping the priority of such a job with its natural networking constraint safeguarding you somewhat from badly affecting other tasks you are performing. Well, that’s the way it felt the other day, unleashing the Windows command line …

… command on a Windows laptop running remotely for that network W: drive. The ” > report.txt” is “wisdom after the fact” really, for you (and in our case, my wife) to receive a …

… and leaving out ” > report.txt” outputs the results to the screen. Another alternative idea here is to append ” | more” to see a screen full of filenames at a time, before it runs off the screen. 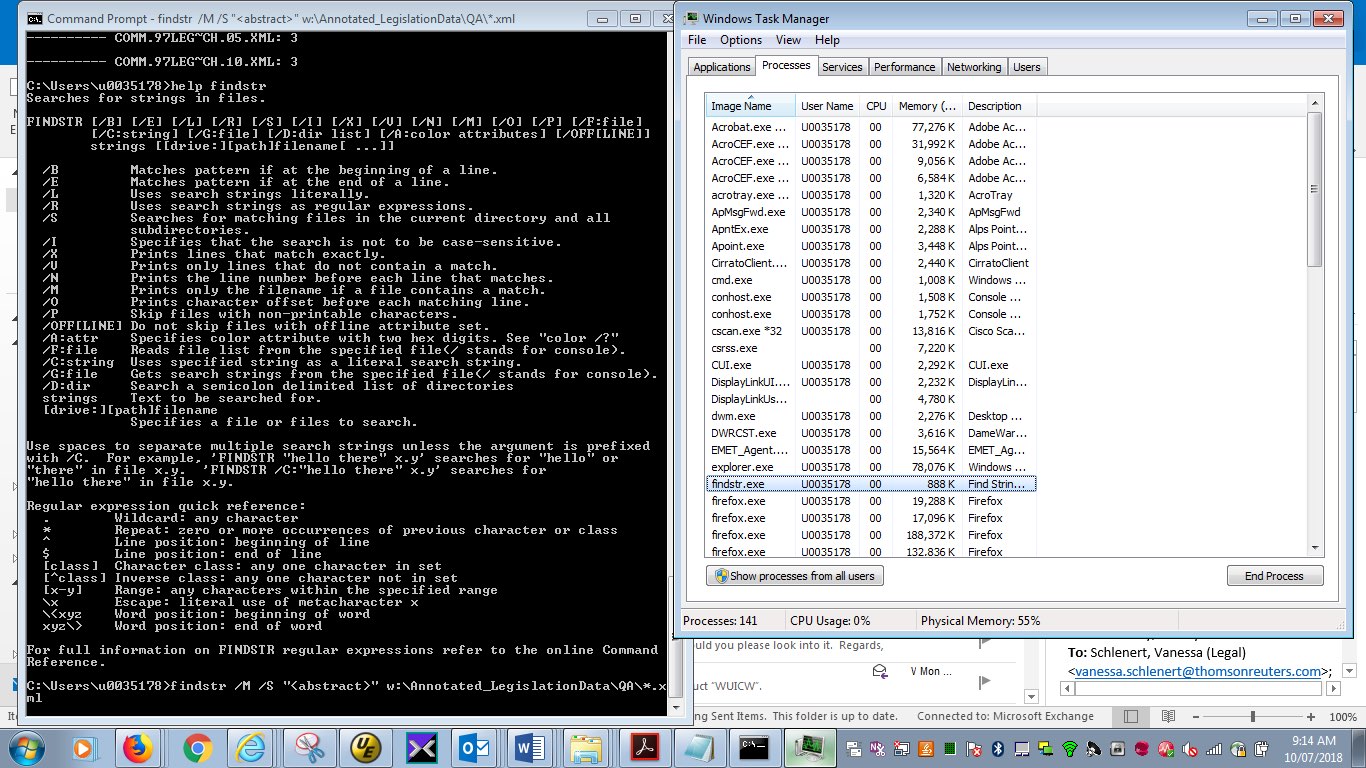 … from which we identified the only “findstr” process (or task), highlighted it, and right clicked to be able to Set Priority “Above Normal” in that way. The job had taken ages but seemed to finish there and then almost, doing that priority change. Could be coincidence, could be good knowledge to tuck away in the cranium?!

Why not use FIND command? This older command can only “find” strings in the one directory you specify, and if this is the case for you you could have gone something like …
FIND /C “<abstract>” W:\Annotated_Legislation\QA\*.xml > report.txt
… and ignored those where the count was zero … all in one go, via some piping …
FIND /C “<abstract>” W:\Annotated_Legislation\QA\*.xml | FIND /V “: 0″ > report.txt 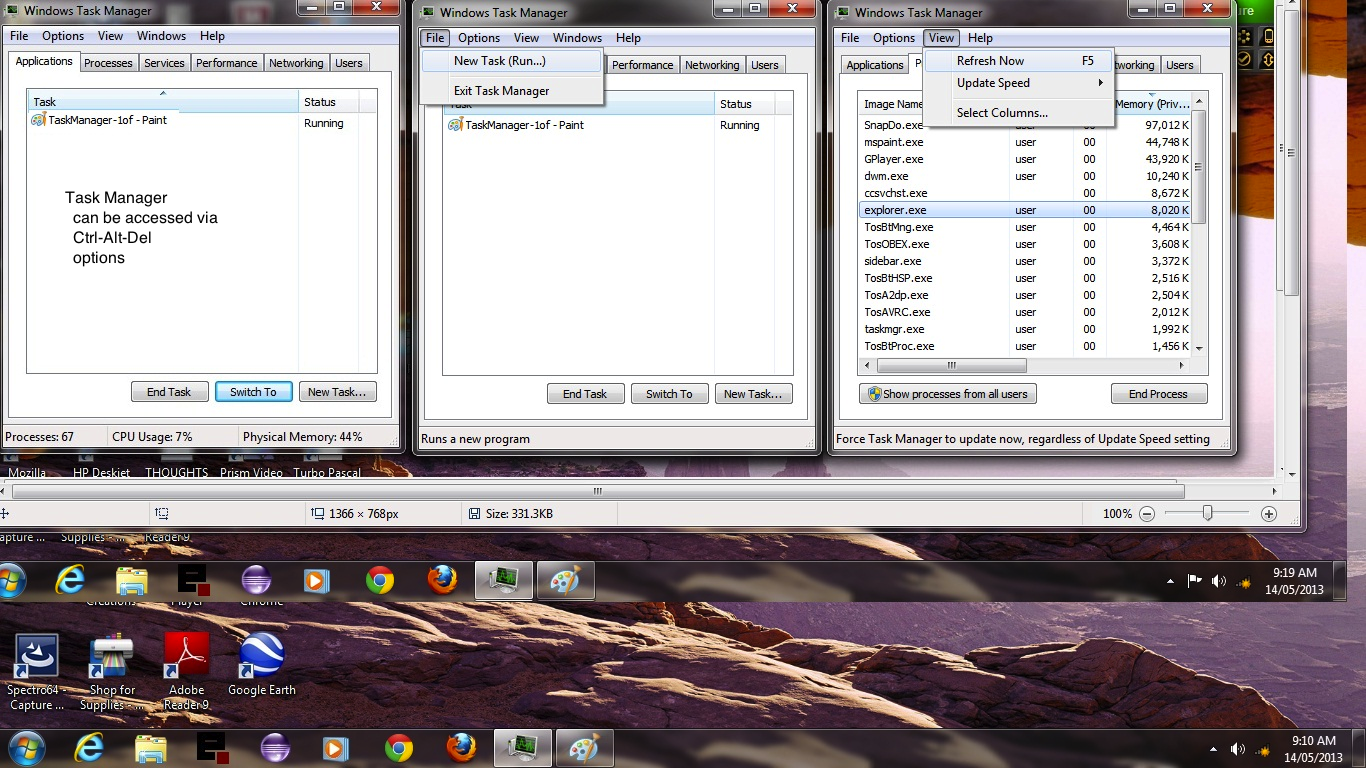 Here is a tutorial that introduces you to some aspects of the Task Manager and Control Panel in Windows, which are tools to respectively monitor and /or run applications and tailor windows settings and arrangements for personal use.

Windows Task Manager is a task manager or System monitor application included with the Microsoft Windows NT family of operating systems that provides limited information about computer performance and running applications, processes and CPU usage, commit charge and memory information, network activity and statistics, logged-in users, and system services (and as often is the case with software tools provided by Microsoft for Windows, 3rd party software is available which fills the requirements more thoroughly ,e.g, “Process Explorer”, “Extended Task Manager”, “Anvir Task Manager”, “Process Hacker”, and “System Explorer”).[1] The Task Manager can also be used to set process priorities, processor affinity, forcibly terminate processes, and shut down, restart, hibernate or log off from Windows. Windows Task Manager was introduced with Windows NT 4.0. Previous versions of Windows NT included the Task List application, which had far fewer features. The task list was capable of listing currently running processes and killing them, or creating a new process. In Windows XP only, a Shutdown menu is also present that allows access to Standby, Hibernate, Turn off, Restart, Log Off and Switch User.

Earlier versions of Microsoft Windows (Microsoft Windows 3.x, Windows 95, Windows 98) had a program known as tasks to display the programs currently running. This file was executed by running the taskman.exe file from the C:Windows directory.[2]

Learn these two parts of Windows functionality and you will get much more satisfaction out of your desktop Windows usage. By the way, Task Manager can be accessed by Ctrl-Shift-Esc as well as the Ctrl-Alt-Del menu of options.

The Control Panel is a part of the Microsoft Windows graphical user interface which allows users to view and manipulate basic system settings and controls via applets, such as adding hardware, adding and removing software, controlling user accounts, and changing accessibility options. Additional applets can be provided by third party software.

The Control Panel has been an inherent part of the Microsoft Windows operating system since Windows 2.0,[1] with many of the current applets being added in later versions. Beginning with Windows 95, the Control Panel is implemented as a special folder, i.e. the folder does not physically exist, but only contains shortcuts to various applets such as Add or Remove Programs and Internet Options. Physically, these applets are stored as .cpl files. For example, the Add or Remove Programs applet is stored under the name appwiz.cpl in the SYSTEM32 folder.

In recent versions of Windows, the Control Panel has two views, Classic View and Category View, and it is possible to switch between these through an option that appears on either the left side or top of the window.

The classic view consists of shortcuts to the various control panel applets, usually without any description (other than the name). The categories are seen if the user use “Details” view.

The category view consists of categories, which when clicked on display the control panel applets related to the category. In Windows Vista, the category used applets below the name of the category.