Businesses and schools around the world benefitted from the invention of the networking idea of a file server as we discussed with the previous Windows File Server and File Sharing Primer Tutorial, and we’ll let Wikipedia explain below …

The term server highlights the role of the machine in the traditional client–server scheme, where the clients are the workstations using the storage. A file server does not normally perform computational tasks or run programs on behalf of its client workstations.

File servers are commonly found in schools and offices, where users use a local area network to connect their client computers.

Depending on the quality of the hardware and networking software making the file server be a server of files, they work well, and let people collaborate and procedurize tasks for the common good, in a lot of scenarios. But they can have issues. Today we talk about a Windows file server “network drive” issue. The word “inaccessible” will be seen, as well as the threat of “losing unsaved data” when disconnecting that network drive affected, manifesting itself with the user perhaps unable to access all or part of that network drive in the way they can when things are running smoothly.

Have you ever had a Windows network drive (the ones that
use a file server mapping to associate a [drive letter non-C]: with
file server UNC (the // starting paths)) path cause you errors like above?

To the right is a webpage talking of other symptoms too. For the user
suffering the issue it can mean all or parts of the network drive
become inaccessible and/or unseen to the user in Windows Explorer.

With problem, when disconnecting this network drive you may be
warned about losing unsaved data because files are still open, and
yet it can be that you swear you have no applications you know of
open that could cause this issue.

Other than rebooting and reconnecting attempts, what else might
resolve this issue? Summary below and in rest of slides of the
presentation today, for a misfiring Z: network drive (disconnected) example:

ping [domainNamePartOfMisfiringZNetworkDriveUNC]
rem …
rem … this results in an IP address we call [IPAddress] below …
rem …
net use Z: //[IPAddress][afterDomainNamePartOfMisfiringZNetworkDriveUNC]
rem …
rem … this new Z: mapping (perhaps needing switch /PERSISTENT:YES) …
rem … is quite likely to have resolved the issues (as alternative UNC definition)

… that resolved the issue around here that last time it happened, the alternative UNC mapping presumably giving the file server a decent opportunity to reset things, we’re guessing. 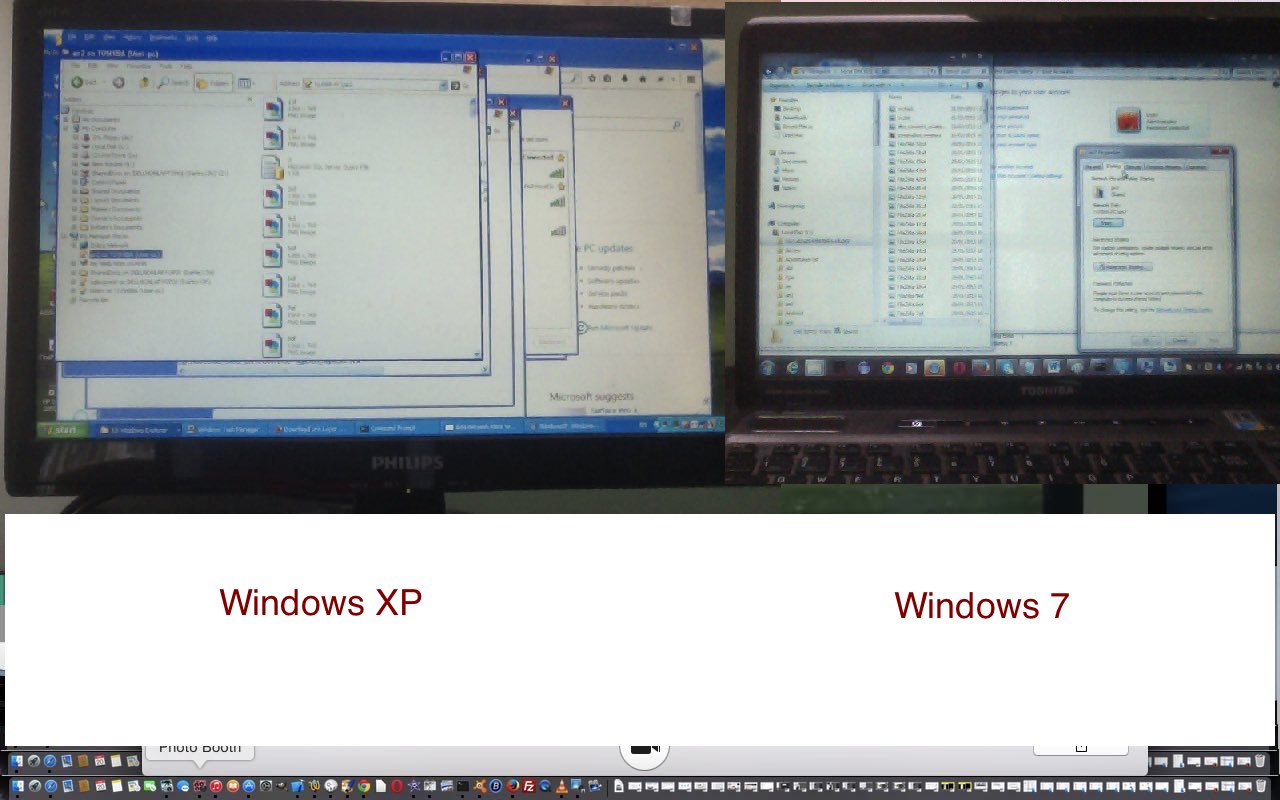 Was discussing Windows and File Servers the other day with a student and realized it is a subject often taken for granted now in workplaces, and perhaps in home networks. The way you can share files between networked computers has been around a long time now.

It has been a boon to System Administrators tasked with allowing various parts of an office to share various parts of whichever file server host’s directories in a variety of access methods involving read, write and execute permissions. Imagine writing this out with pieces and paper and an honour system?!

In Windows file server connections could be mapped to a spare (network) drive letter and perhaps for the purposes of usage the connection’s identity can just stay in terms of a UNC (Uniform Naming Convention).

For home networks it can be good to share files too, and I know Windows XP is on the way out, but even it can share with Windows 7, in a peer to peer file sharing way as we show with the picture of today’s tutorial the work of which was based on the excellent advice of this webpage. Windows 7 and a MacBook Pro can share files via Samba protocol as well, and we do that here, and we discussed it with PC Html/Doc to Pdf via Mac TextEdit Primer Tutorial. If Windows XP has exited from your life and you are using Windows 7 and up then Workgroups may well be your best option for file sharing, as security has tightened with regard to many of the older networked file sharing arrangements involving Windows.

With all these networking arrangements a big trend has been to get wireless once inside the house, or building, so wireless routers have become interesting devices on many networks today. To get to that wireless local arrangement, though, the debates rage about how best to provide the telecommunication infrastructure in the country where you live, so here, in Australia we talk of “fibre to the node” and “optical fibre to the premises” in debates concerning our current overhaul of the infrastructure we, in Australia, call NBN (National Broadband Network).

How many years ago, though, were we still trailing ethernet, or phone lines, across floors? It was not that long ago.

The other trend is the proliferation of smart devices, especially the mobile phones and tablets, but also “smart fridges” and “smart televisions” and “smart butterflies in Brazil”, the idea being to carry around the communications and pick up communication signals from the antennae of the service providers (on roofs of buildings or hills) or perhaps via satellites, sending messages in the form of email, or SMS, or voice, or audio, or video etcetera.

Anyway, that is why you see that “Share” button so often on software … connections, connections, connections … networks upon networks upon networks. Then the game for the bigger players (or even we users on social media) is the game of “blocking” things out, because there is so much of it in the first place. Countries can set up filtering at the ISPs, or individual companies can block IP addresses, or users on social media can control “friend” arrangements with finer and finer subtlety (we’d hope) … because one bad mistake, and it’s out there … the software design is very rarely based on it being just as easy to “bring it back in”.

The world’s store of digital content is now the equivalent of one full top-of-the-range iPod for every two people on the planet, following the explosion of social networking sites, internet-enabled mobile phones and government surveillance.

The digital universe is expected to double in size over the next 18 months, according to the latest research from technology consultancy IDC and sponsored by IT firm EMC, fuelled by a rise in the number of mobile phones. At the time of their first Digital Universe report in 2007, the pair reckoned the world’s total digital content was 161bn gigabytes.

It begs the question … can it keep going on this trend?