In this jurisdiction as far as Covid is concerned, the New South Wales state of Australia, many coffee shops and pubs and restaurants and other small businesses have opted to be able to say they are …

… businesses. And though this can be achieved with …

And so we see QR Code usage increase on when QR Codes Writer Primer Tutorial talked about them. In amongst the groceries at our supermarket, too, have noticed QR Codes used for some items, causing my “hinge swing” scan actions to be the go!

Today’s animated GIF presentation sees us installing the “Service NSW app” on our iPhone and using the “COVID Safe Check-in” functionality of that app to register my visit to a business registered to be a “COVID Safe business”. As a customer logging their presence … 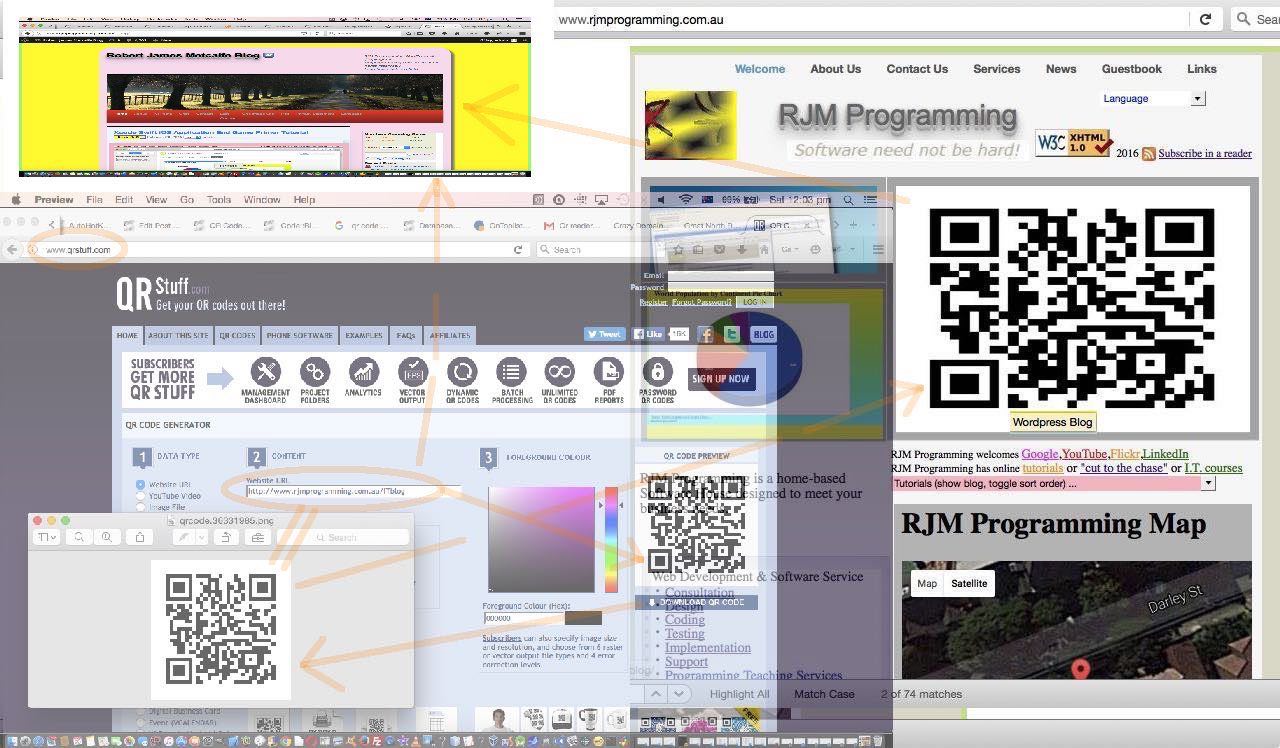 There’s a good reason we read and/or listen before we write, generally. To understand something new, before you write anything, it is generally best to ask the question “Do I understand this concept?” ahead of using it. People who have “guessed” on a powerful command line statement that has fairly complex and important switches involved with its use, and you happened across a bad “simplification”, based on a guess, will know the “sinking feeling” this sometimes involves … and, of course, will swear to never do such a thing again?!

Okay, so regarding QR Code usage the reading aspects to it presented with QR Codes Reader Primer Tutorial as shown below were a good precursor to the “write a QR Code image” lesson of today’s tutorial. Happily, also, for our case, we are not using any of this QR Code in a mission critical scenario, which isn’t to say that there are Point of Sale (POS) systems out there on the net where everything going smoothly regarding the practicalities of QR Code usage is mission critical. We’re going to use it as an alternative navigation tool to the “Robert James Metcalfe Blog” in the RJM Programming landing page.

The QR Code reading discussion of the tutorial below worked off the fact that somebody had placed a QR Code image onto hardcopy or perhaps into a PDF file on the net, or perhaps somewhere else on the net. Where do you create such QR Code images that have this “navigational” relationship? We got our relationship between a …

… via the use of this online free resource QRStuff.com … thanks. Its method is that the user types in a URL of interest and the website creates a downloadable QR Code image for that URL, that you “plonk” on your own website, and wait for the thousands and thousands of QR Code Reader users out there, to notice it, and use their QR Code Reader app software to scan the QR Code image, and navigate to the URL you defined above. Cute, huh?!

And so, presumably, that is why we are increasingly seeing QR Code images appear on billboards, presumably low enough down that we mere mortals … the “thousands and thousands of QR Code Reader users out there” … can get out our mobile device, with the continuous Internet access, and with QR Code Reader apps to scan (or photograph) away … possibly, some of us acting as though we’re just prejudging the winner of next year’s Archibald, and being able to claim that you were there before it became famous … but we digress.

We hope you get the gist of the tutorial picture today involving creating QR Code images and their use on the net. 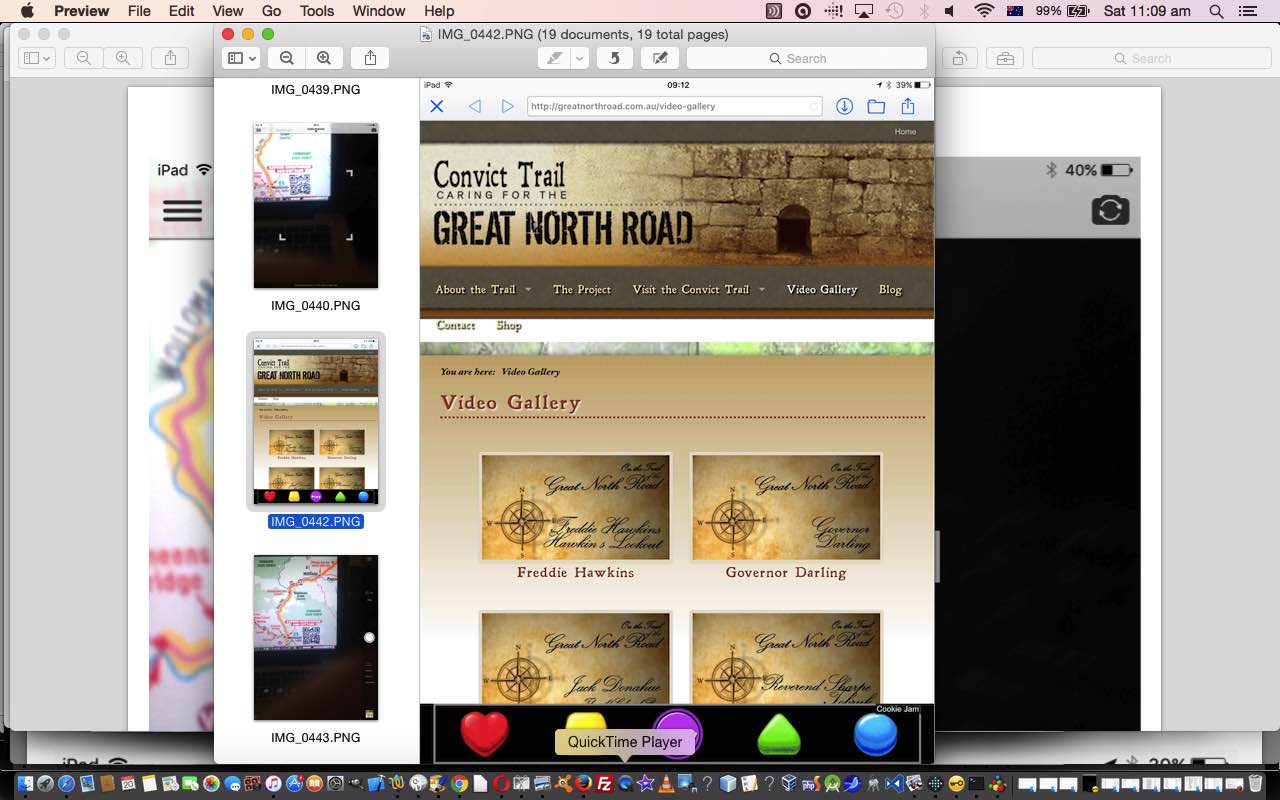 Are you like me, and got told about QR Codes (those square curious looking barcodes) ages ago, and “let it ride” in your mind as “another fad” perhaps, rather than giving it a go. Well, today, finally we “gave it a go”? And it was really worth it.

Actually, though, it seems to still be the case that “supply” (of websites that deploy it) is the major stumbling block here. We “deployed” QR Code Reader functionality here on an iPad by downloading and installing a mobile app. So far not too hard. But let me take you to “why now?”. Well, it was a “where” of life scenario, the sucker punch for me … a map with QR Codes next to places on the map whereby that QR Code read by a QR Code Reader app, effectively photographing it, leads you to “further reading” webpages.

So, yes, QR Code usage is asking, in all practicalities of usage, for hard copy input, or another computer device screen with a QR Code showing, separate to the device you are using with the QR Code Reader app, that you photograph, to make all this functionality “shine” … but shine it did, in a “woh” moment, at least for us, and maybe for you?!

So we show you a stream of consciousness presentation of us finding out about “side stories” to the Great North Trail, here, in Sydney, bushwalking out of the Lane Cove River National Park heading north, and investigations halfway up the track on the way through to Newcastle.

To summarise QR Code functionality usage the “ingredients” required are …

Hope you get something out of the presentation.