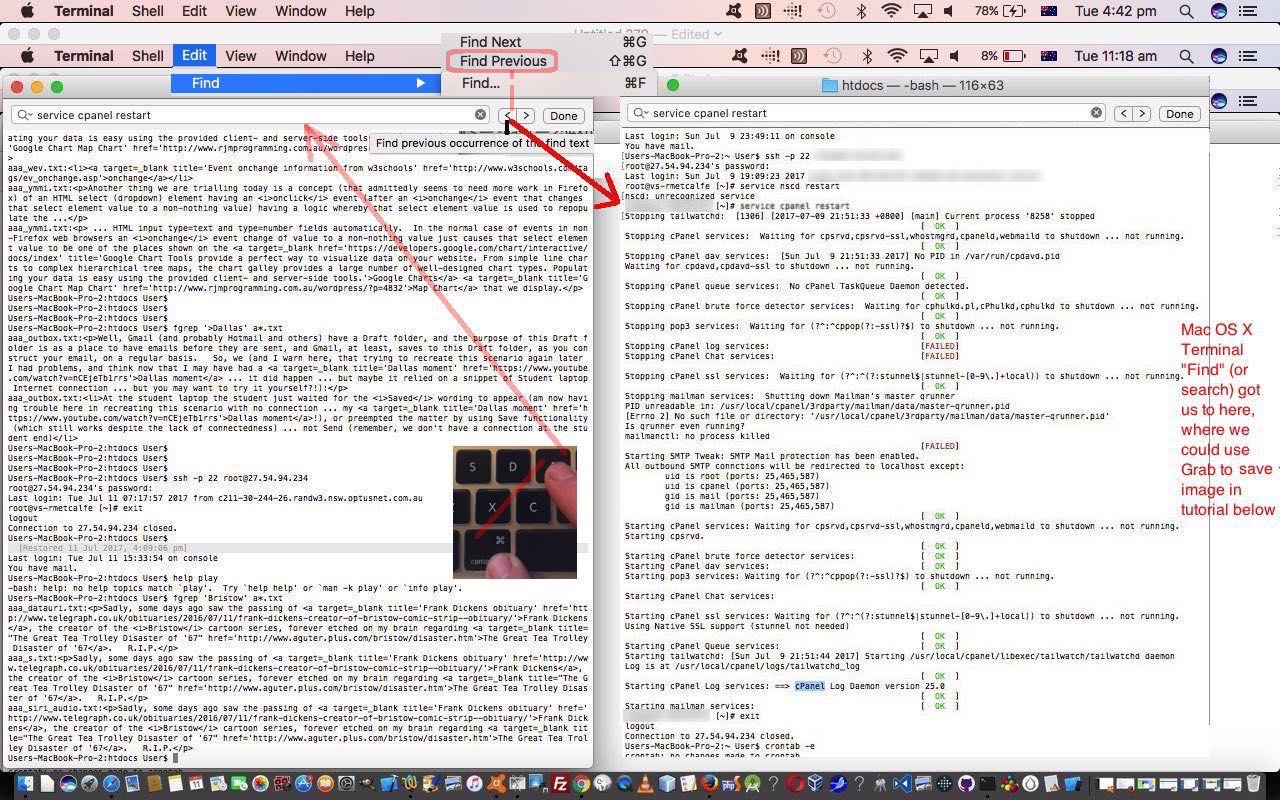 Do you ever discover great things by stumbling onto them? We do from time to time, and recently we did just that using what we spend a lot of our time at using on this MacBook Pro, the Terminal desktop application … what we just think of as “command line” for Mac OS X … and we even extend that to think … Linux … though Mac OS X is really a BSD (is it?) based operating system … why the laziness? … life is too short to quibble … and looking up Linux on the “net” feels more apt somehow … we have discovered differences like the “drutil” as mentioned in Mac Linux DVD Troubleshooting Primer Tutorial but generally speaking in our mind, at least, we like to think “command line Linux” and involve Korn Shell even though you are in a Bash scripting environment, by default.

At this point, you can ask … why have you got CentOS Linux Web Server Services Restart Primer Tutorial down below? Go on … ask … awwwwww … go on … … share my next thought bubble … okay, you asked for it … there …?

It’s because we were wondering with its top image content what to show. It had been a day or two since the tea trolley disaster of The Great Tea Trolley Disaster of ’67 … but we digress issue of that tutorial, and our “always running in one or two windows” of Mac OS X Terminal sessions had moved on pages and pages down what we used to envisage as a “forward only” tape or möbius strip or some such thing, that has very limited “rewind” functionality. That was, until the glorious day, and we can’t remember what Mac OS X key we might have pressed to make it happen, we stumbled upon the Search functionality in Mac OS X’s Terminal application. To be fair and admit dumbness on our part, we can’t have been too curious not to notice it there in the menus under Edit -> Find -> Find… … which has here and now tweaked me onto the fact that I must have been “focussed” in a Terminal window and accidentally, for my first time ever, have typed Mac OS X key Command-F (as per the shortcut that shows with the Edit -> Find -> Find… menu option) … have checked this independently now, and yes, that’s the go. Pardon to all those readers who said “sheeeeese” five minutes ago, but … did you see what happened when we pressed Command-F … did you? did you? … then Shift-Command-G to go backwards … huh? huh? … … want me to show you again … huh?! … which one would you like? … it’s your choice!

The point is valid though, and you can see all this in context with today’s tutorial picture, if you forget to Grab (or that other Mac OS X way to screen capture … command – control – shift 3 or 4) we also explained at Screen Capture Primer Tutorial at the point in time of doing the relevant thing in Terminal, via the Command-F “Search” (or Apple says “Find”) functionality you can “Find” it again, and this is what we did to be able to reGrab the image in the CentOS Linux Web Server Services Restart Primer Tutorial below. Content from a couple of days prior, if my memory serves me right. Cute, huh? Will have to revise my “rewind” limitation thoughts regarding Mac OS X’s Terminal desktop application, methinks! 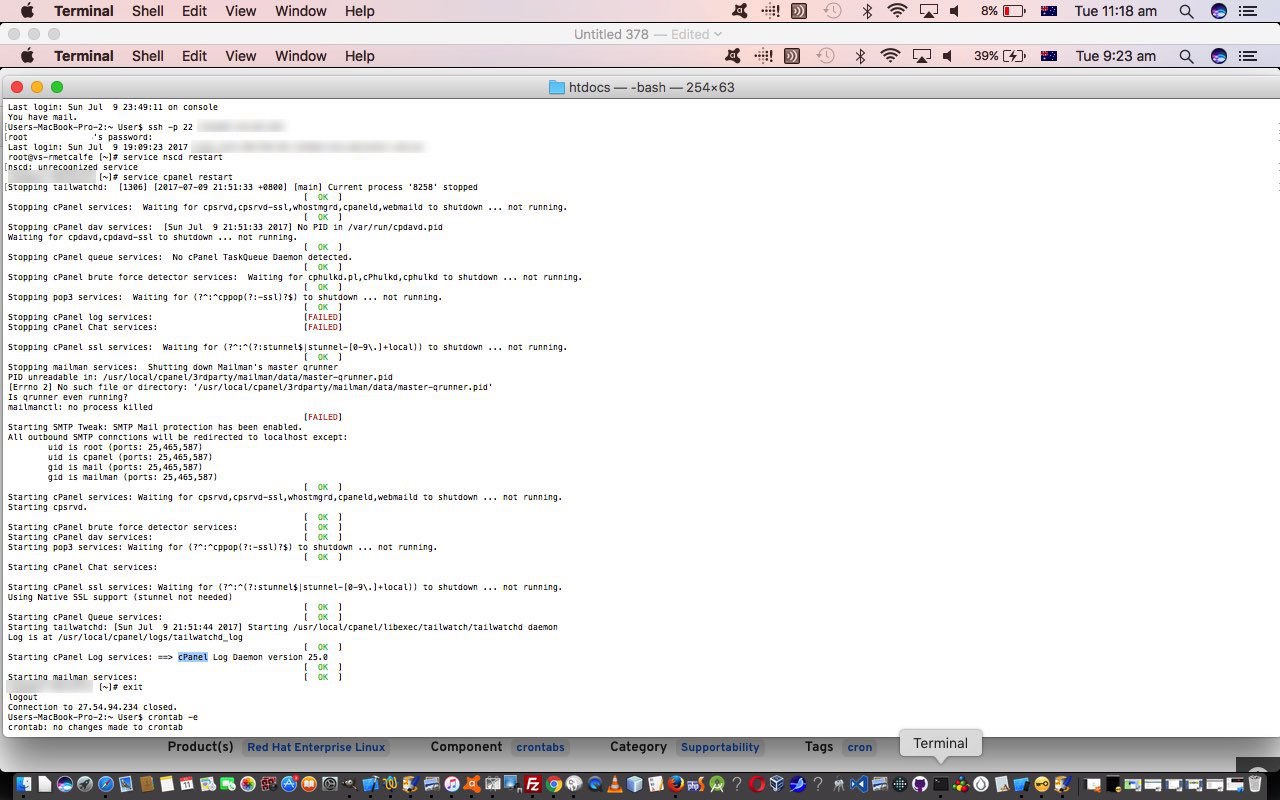 The other day the unthinkable happened, for us. Something to do with Linux and its associated role in running the rjmprogramming.com.au web server failed, not totally, but in a way I’d never before encountered using Linux or Unix. You see Linux and Unix are very stable. They just go about doing stuff running web servers well, except where “human error” plays a part, and include here any thoughts about lack of resources occurring because of lack of foresight by humans.

Anyway, be that as it may, we are not here, today, to talk about the causes of this issue … that’s very much Nala and Luna’s 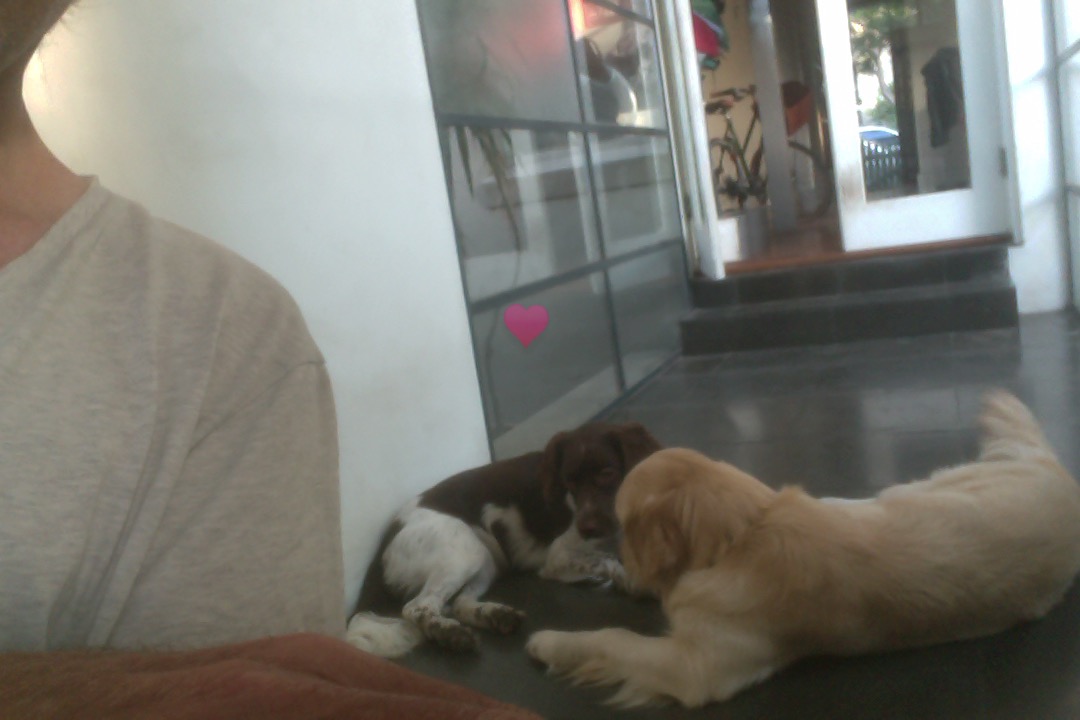 domainkennel … but more “picking up the pieces”, as fast as possible.

You might recall from Windows FTPManager Ftp Client Primer Tutorial us basically discussing “access” with our CentOS (WHS) (with cPanel) Apache/PHP/MySQL Linux web server for the rjmprogramming.com.au domain’s access …

… well, not including our really last resort of “Power Management” we had, for a short period of time recently a situation where “cPanel” was down and “sftp” could not help with the type of access we were after, which was a report that cPanel normally provides. Would like to reiterate. Apart from occasional DNS self-restricting temporary arrangements, cPanel never fails this way. So it did take 3 “dumb” goes at it to believe the unbelievable (for us), and deal with realities.

Those realities were that “ssh”, which was still working, was needed to bring “services” back up. However, we were quite rusty (especially regarding the cPanel one below) about this (as it is so easy in day to day use to use cPanel’s “Restart” menu options), so consulted Goooooogggggllleeee and its linkages (thanks everybody, especially the forever reliable Stack Overflow website, a resource hard to imagine surviving without) to …

… to get the gist that there is a useful pattern here … thanks CentOS … that goes, for “ssh” access leading to a superuser login command line environment you restart the immediately required web server CentOS services via …

Ah, back to normal … so in the spirit of not wanting to scare the pants off any web server managers out there immediate danger averted?! 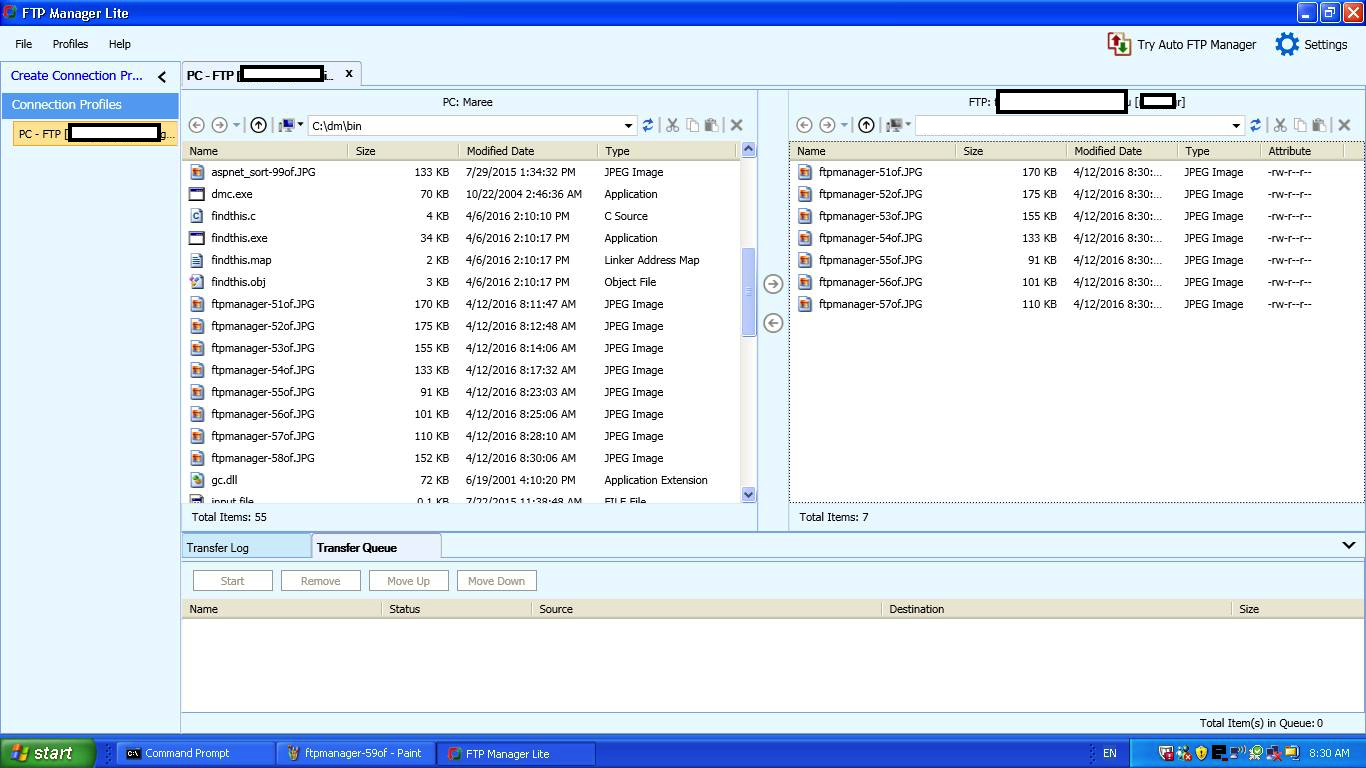 We are always on the lookout for good tools to do with the fundamentals of Web Server maintenance. Our view of what are the essentials for the maintenance of an Apache/PHP/MySql web server (like for the rjmprogramming.com.au domain) are …

… and today we look at a product new to us, that we became aware of recently, facilitating the last of those … sftp (or ftp) … involving a Windows local client and web server remote computer to transfer files to and from.

The Windows desktop product new to us, that seems really very good, and you should consult regarding the early slides of our slideshow today, to see for yourself, is called FTPManager Lite by Deskshare Incorporated.

And so, with today’s slideshow …

We found FTPManager to be very easy to use and navigate immediately, just what you want for an FTP Client, and if you see good slides in the slideshow today you can thank FTPManager for it … thanks.

Guess this begs the question regarding what takes up most time maintaining an Apache/PHP/MySql web server, for us? In order of use, with highest amount of use up the top, it would be …

… and so that may show you how important products such as FTPManager are to those maintainers of web servers. Most likely, though, these products get hammered with use, but achieve quietly and efficiently, without fanfare, for the vast majority of us.

By the way, those role descriptions cross over quite a bit, For example …

When you maintain a Web Server there is often a requirement to upload (from your local disk) to the web server and download (from the web server) files you are working on?

We discussed this previously with Web Server Access Primer Tutorial as shown below.

We think the Firefox web browser addon called FireFTP mentioned in Firefox and Favourite Plugins Tutorial is pretty much the “bees’ knees”.

Today we look into an alternative Open Source product called FileZilla which may fit the bill as well, and it sits separate to any web browser as a desktop GUI application for Windows or Mac. Today we show an install on Windows for the server and client products, the latter of which you’ll use to upload local files via the (s)ftp protocol.

Of course if your web hosting came with other specific arrangements for uploading, that would be a better course of action to invoke.

FileZilla is a pretty friendly and useful tool, but, as we are in the Firefox web browser so often it is hard to resist using FireFTP. Hope you enjoy today’s tutorial … and what could follow? 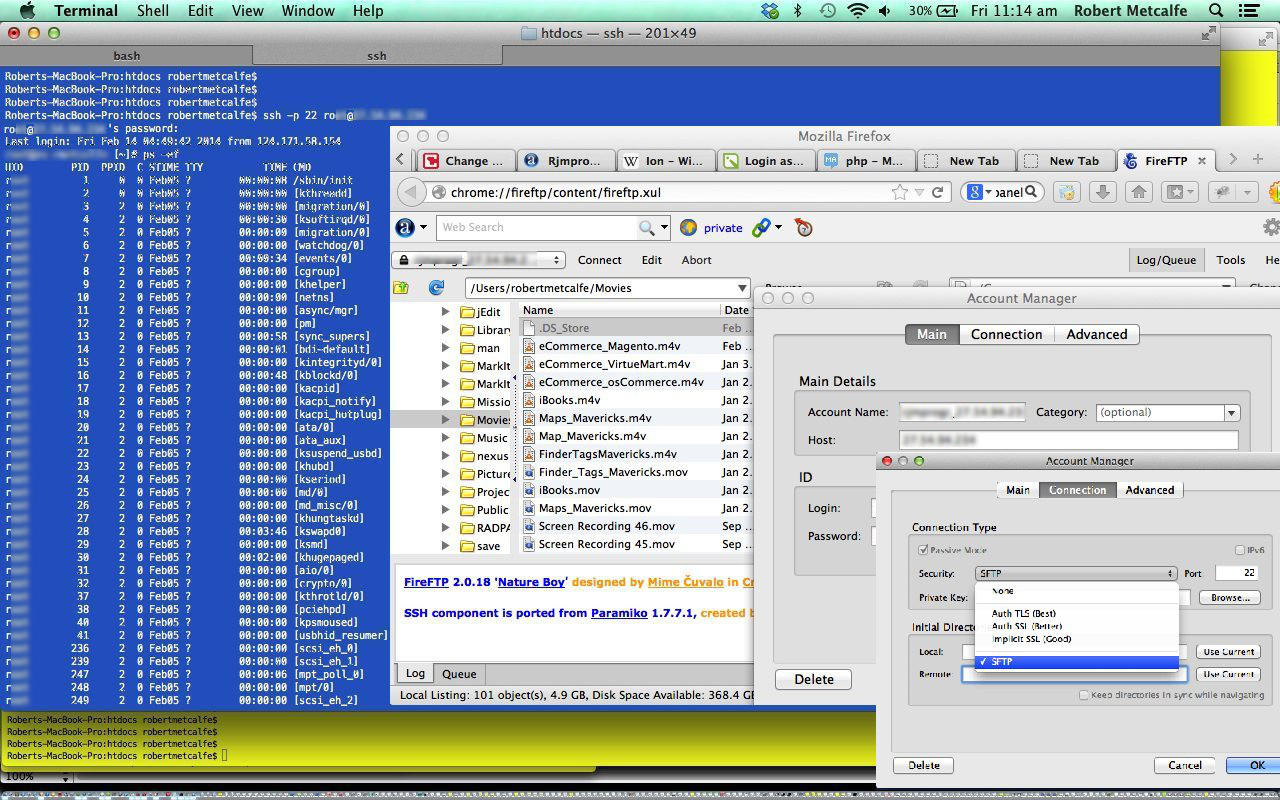 When you maintain a Web Server there are lots of tools of use, but just what do you need to run an Apache/PHP/MySql web server?

With today’s tutorial we show access via a Mac laptop’s Terminal application’s Linux bash session’s access to the web server domain at www.rjmprogramming.com.au using ssh (which is a “logging on” piece of functionality … also see rlogin). This destination CentOS web server environment is also Linux. Also in the picture is a bit showing sftp being used for the transfer of files to and from the web server via your laptop, and we use Firefox plugin FireFTP to facilitate this. There is a Firefox and Favourite Plugins Tutorial regarding this below as well.

Here are some good researching links … so, bye for now …

Previous relevant Firefox and Favourite Plugins Tutorial is shown below. 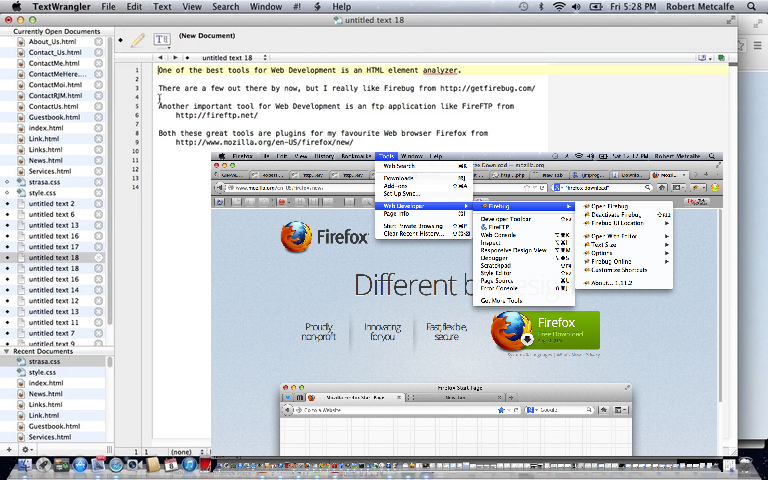 One of the best tools for Web Development is an HTML element analyzer.

There are a few out there by now, but I really like Firebug from //getfirebug.com/

Both these great tools are plugins for my favourite Web browser Firefox from
//www.mozilla.org/en-US/firefox/new/

Another important tool for Web Development is an ftp application like FireFTP from
//fireftp.net/

So let’s have a look at Firefox, briefly, and Firebug and FireFTP …