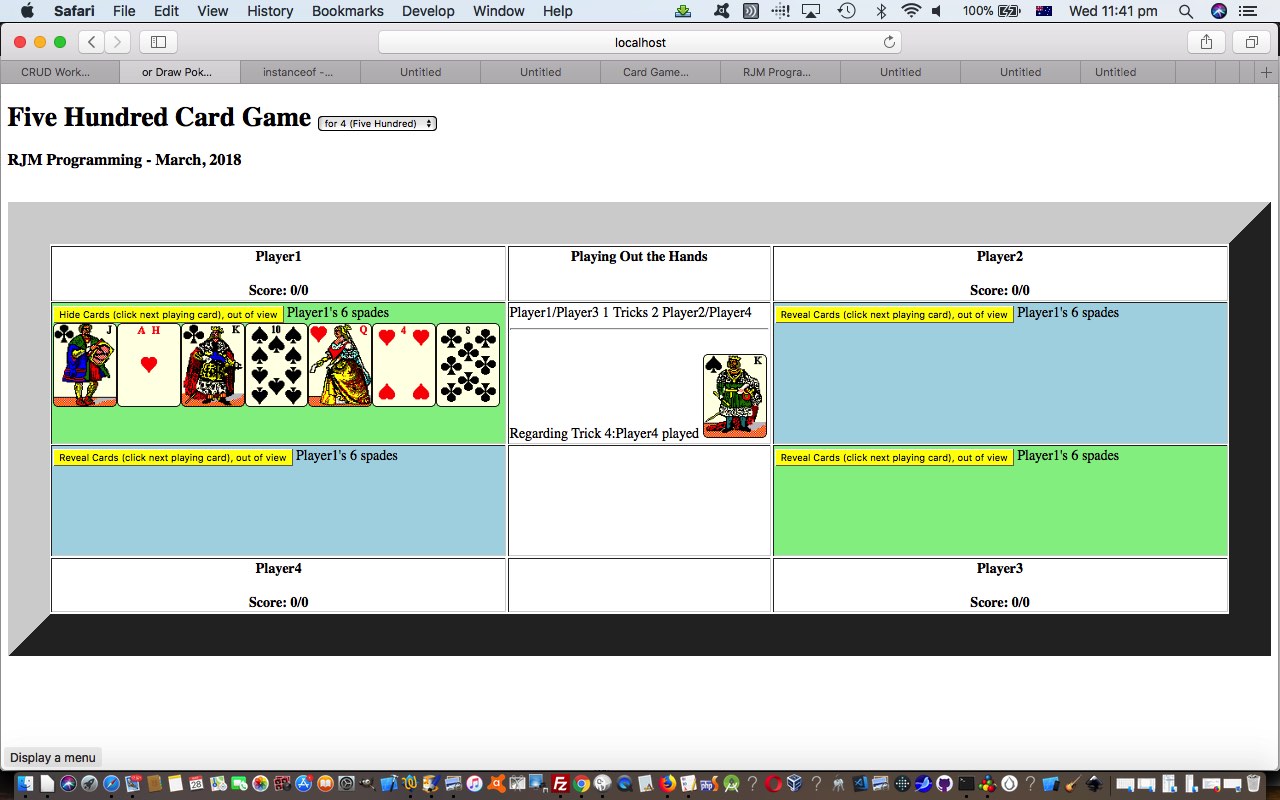 That card game is Five Hundred, and if you know this game, then you’ll know it is best done …

There is also that “minus” and “add” idea in that whoever wins the bidding can swap 3 bad cards for whatever is in the “kitty” (the Heap of three cards left after dealing to the 4 players).

We need the middle table cell to be much more active for this game, alternatively having dropdowns for bidding and card images during the execution of the card playing to determine who wins the tricks. Why is it called “Five Hundred”? Well, you score more for the more daring bids, and your team tries to get to +500 … yes, you can go out the door on -500 in some incarnations of the game. Here, we just let you play on as long as you like.

So this Five Hundred Card Game live run can show you what we mean. It involved HTML and Javascript and CSS in a_card_game.html with these code changes. 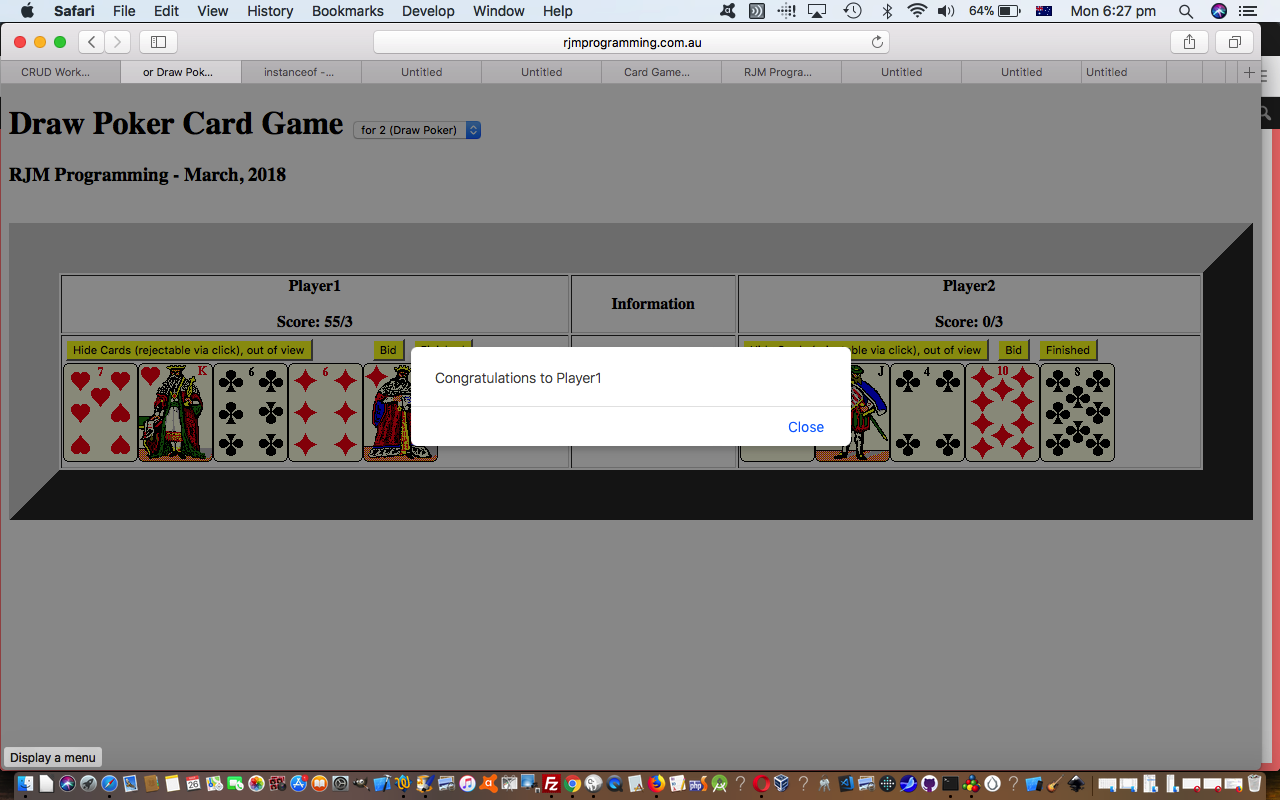 … and thinking about this, we thought the card game Draw Poker fitted the bill quite well, but thought that what would need attention was …

… and the mechanism to differentiate which Card Game is used can happen via more “option” elements within that HTML select (dropdown) element, the onchange event for which reloads the website with a different URL containing (for a 3 Player Draw Poker game) ?carddealnum=5&numplayers=3 or containing (for a 6 Player Pontoon game) ?carddealnum=2&numplayers=6 analyzed up the top of the Javascript as per …

Overall, the “synergies” win again, at least in our thoughts.

Today’s a_card_game.html‘s code changes can be tested via this live run link, where Draw Poker and Pontoon Card Games share the same codeset.

… in addition to new Class Pot as an optionally instantiated substitute for a default Score (not a Class) increment value of 1.

And the test for the line of thinking above can be an “instanceof” code block, within the (new bits of) Player Class SetScore method like …

… which is called in this way …

… so that players not bidding when others do, don’t benefit. Hence, the art of bluffing is introduced into the game for the players (up to 9 as of today).

In this way, instantiation can be an “optional” concept, the “instanceof” operator working towards its “optional” integration into Javascript code, for an “optional” bit of functionality. 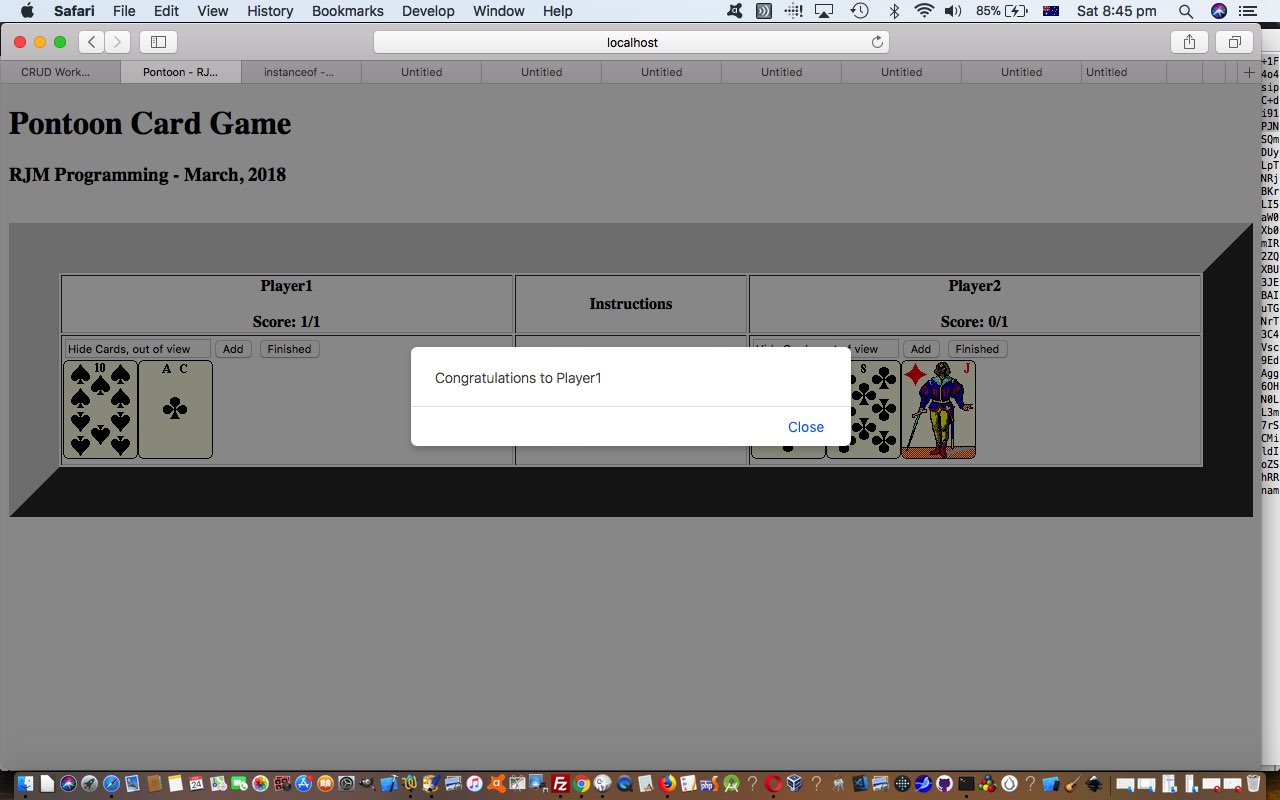 Today’s Pontoon (sometimes known as Blackjack) Card Game web application has no “instanceof” operator usage as yesterday’s Javascript instanceof Food Emoji Guessing Game Tutorial did, but the Object Oriented Programming (or OOP) connections with the Javascript is very strong today, so it continues that OOP theme, that you can see a progression of thinking on with the blog posting thread below.

We have lots of “Nouns” representing “Class” blueprints in today’s HTML and Javascript a_card_game.html code …

You will see looking at the code that they interact with each other a lot, as we people (and objects) do in our lives, because “people and things” interact.

There are a couple of reasons to organize code with those “Subclass” Card classes. We think by doing this we can start with some Pontoon Card Game code and develop methods of a more generic nature to suit other card games into the future. If you don’t start with “specific” (sometimes over the top) Class definitions early on, that genericization (or “tool” making) becomes a lot harder later. It also opens the door to “instanceof” application on some of those future card game execution logics.

You can see how it all works with today’s “first draft” live run Pontoon Card Game. 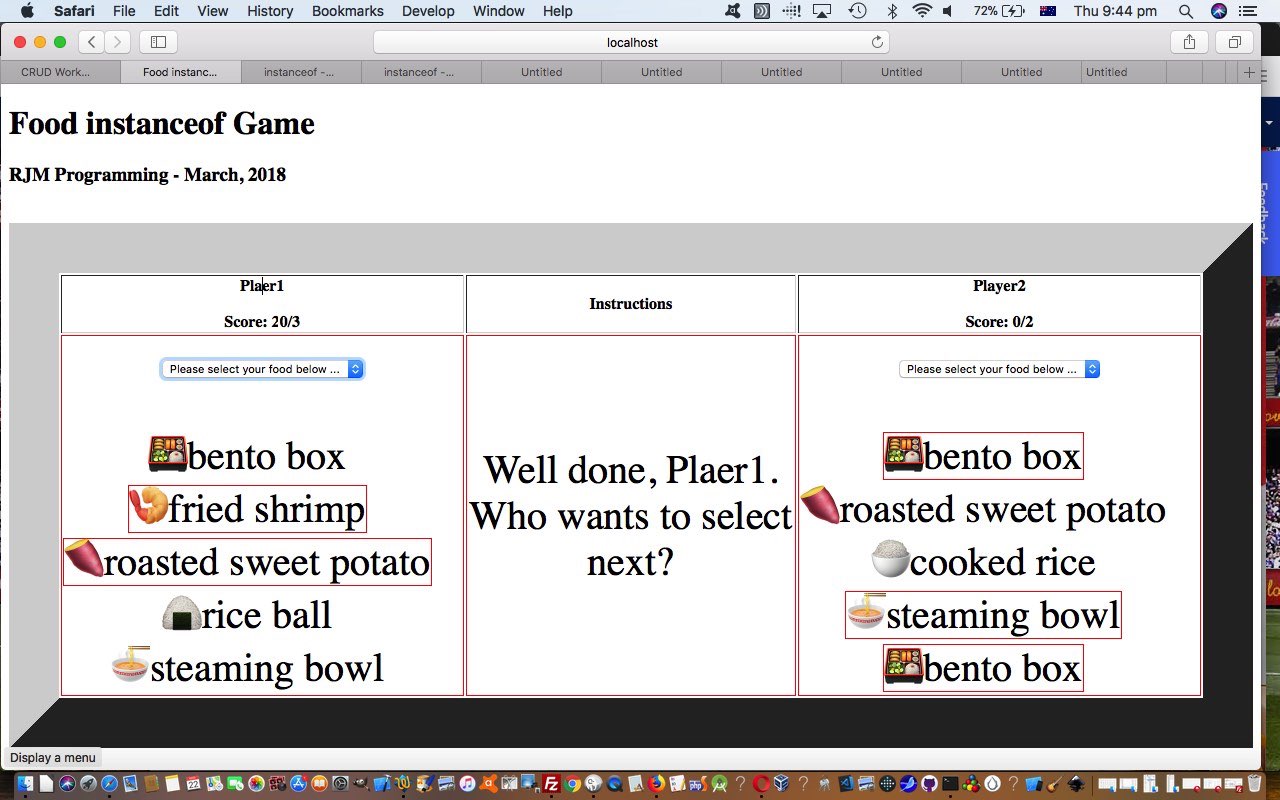 There are a few salient points behind today’s “Food Emoji Guessing Game” augmenting yesterday’s Javascript instanceof Object Oriented Programming Tutorial attempt to make “instanceof” a part of your life. Like, why aren’t you taking “instanceof” to the zoo today? After all, the beach outing yesterday was a huge success, I hear?! They are …

And we find it is no coincidence, to us, that this discussion has a “game” web application concept behind it. Games, to us, have concepts, directly associable with (the) “Nouns” (of life), and so suit OOP concepts. This is interesting to us, because the purpose fits the style, whereas with other web applications, we more often, in all honesty, when angsting over how to do it, think of the “Verbs” or action points, immediately. That could just be me, but it could be that this thought process could be an indicator of how you should style, at least the Javascript, of your client side Javascript code, associated with a web application you are working on. Rest assured, though, that whatever you decide, this decision is just a “programming lifestyle” decision. Don’t let anyone insist that one or other of OOP (Nouns) versus Function based (Verbs) Javascript methods has to be used for any given solution you decide upon for a web application job. Just like with mobile phones, you have to know that programming started without OOP, as telephony did without mobile phones. Just be happy programming, is my advice, for what its worth 129 bitcoin last time I looked.

So Classes can inherit. This means you can, as we do with today’s food_oops.html‘s Javascript code, we have an action (and data member) packed “parent” Class (called Food today) that you might want to consider Subclasses (with names like Shortcake or BentoBox) inherit from in the Javascript (very OOPy) code snippet below …

How does today’s game work? Two players line up on an equal footing. One chooses a food of interest, as the other player closes their eyes. Then that other player can open their eyes and try to guess the food type (not shown … doh!), that if they guess correctly, will score them 20 points (for 20 different food types), else no score for that guess. Any player can assume either of these two roles in the game, first in, best dressed. 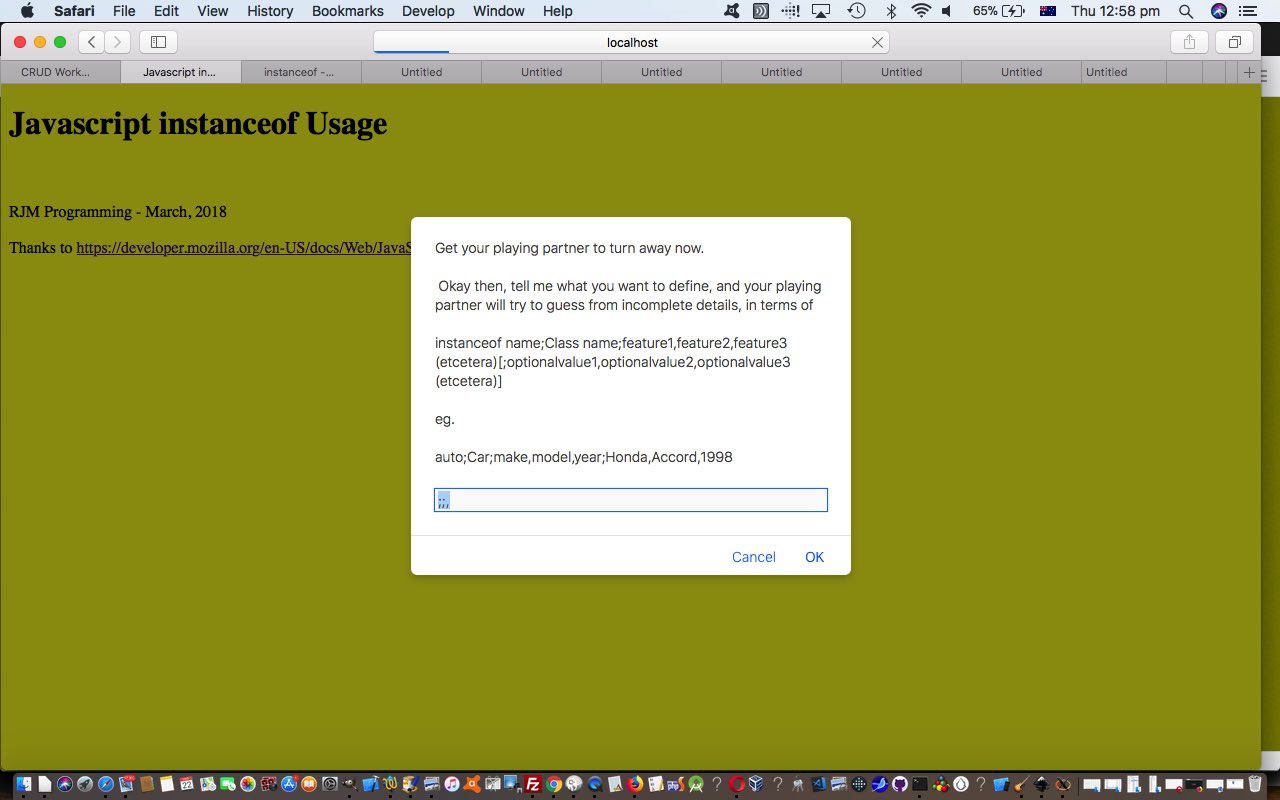 To understand the Javascript instanceof operator is to “get” a whole lot of what Object Oriented Programming (or OOP) is about.

You’ve got your concept of a Class which is like a “blueprint” for describing the characteristics (data members) and methods of an Object (and you can think of an Object as quite often like the “Nouns” of life).

Using that “blueprint” Class during a web application, using client side Javascript you might use the “new” keyword like below, and illustrated in that instanceof link above …

… you are “instantiating” the Class “Car” to the variable “auto” above. That …

… above is called a “constructor” and it can contain more than the “data members” it shows above. It can also define “methods”.

Here’s the good thing about Object Oriented Programming (or OOP) like this. It begs questions.

What velocity is the Car moving? In the “blueprint” Car class you would define a “method” you might call “CalculateVelocity” and then to call that method you might go …

So the Javascript instanceof operator can be thought of as …

The instanceof operator tests whether the prototype property of a constructor appears anywhere in the prototype chain of an object.

And we have found, if you are at the situation, dynamically executing client side Javascript, and are unsure, Javascript try/catch code like …

Today’s web application usage of the Javascript instanceof operator uses good old document.write(prompt([wording],[default])); for that “in mid air” prompting feeling to a web application. It is sort of like a game for two players that goes like this …