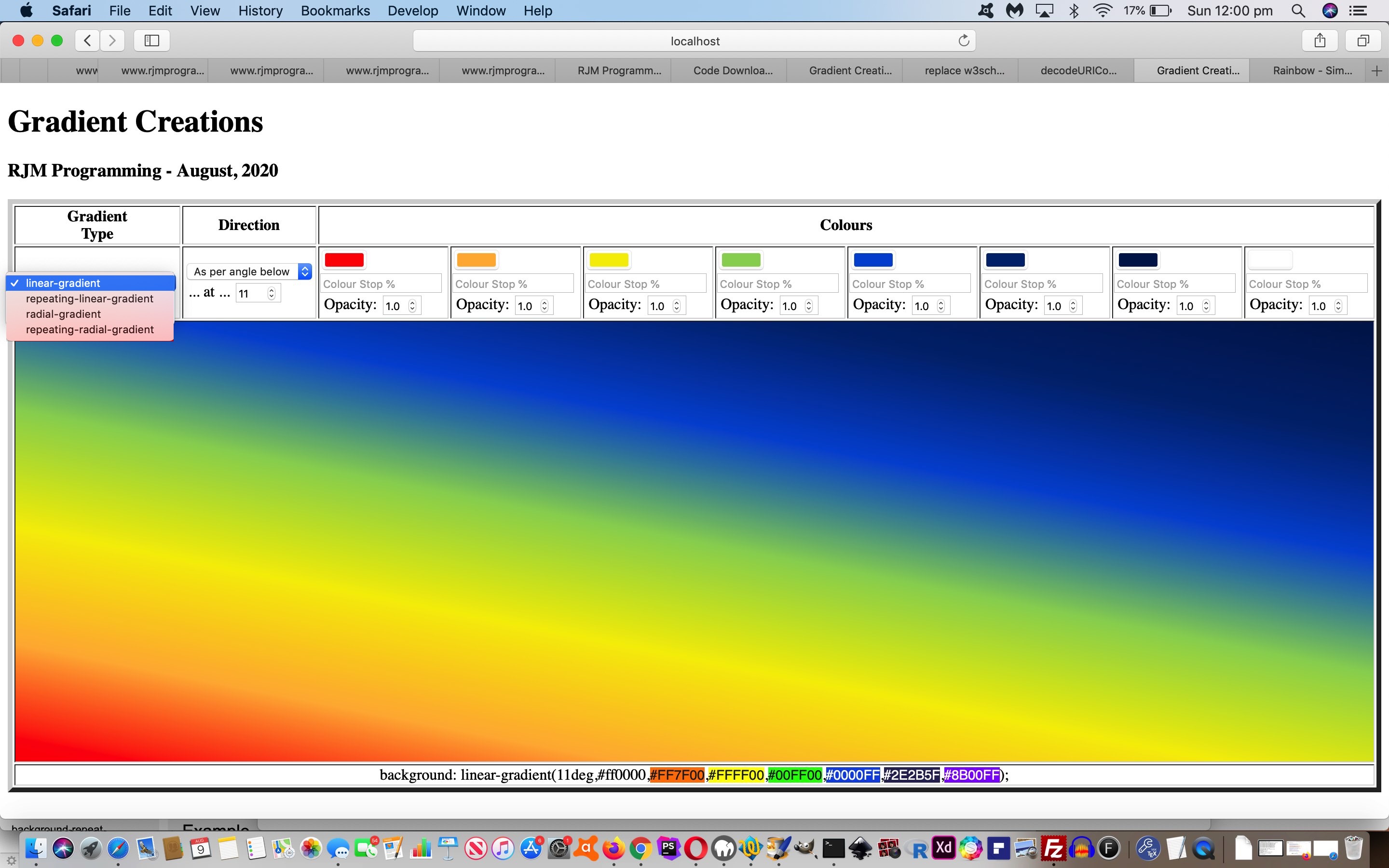 The great CSS background “gradient” functionalities can come in four forms, those being …

… as a means to add background interest, even to the point where the background can have some (different) transparency (level) compared to the foreground, as per example CSS like …

With tutorials like CSS Repeating Radial Gradients Primer Tutorial we allowed you to create some gradients, but we wanted a more detailed approach that was generic in its approach and left you with some CSS of use, which is often not the go with many other (albeit useful and inspiring) websites on the net.

There are a whole range of what you might call “directional” nuances you can apply to your gradients. There is opacity to allow for. There are “hard colour stops” you can apply. For linear gradients you can apply a variable angle. For radial gradients there are positional nuances that can be applied.

And then there are the colours. We are not sure of the limits, but we allow for up to eight colours. Enough to simulate the seven colours of the rainbow we go for with today’s tutorial picture arrangement whereby it tweaked with us that the HTML input type=color elements are all well and good but we needed to allow our CSS be editable by nesting into an HTML div contenteditable=true elements that can be tweaked for exact rgb or rgba colour definitions (thanks, Wikipedia), as we could look up for the purposes of displaying a rainbow coloured gradient background (we hope you like)!

Or see a repeating radial gradient example below … 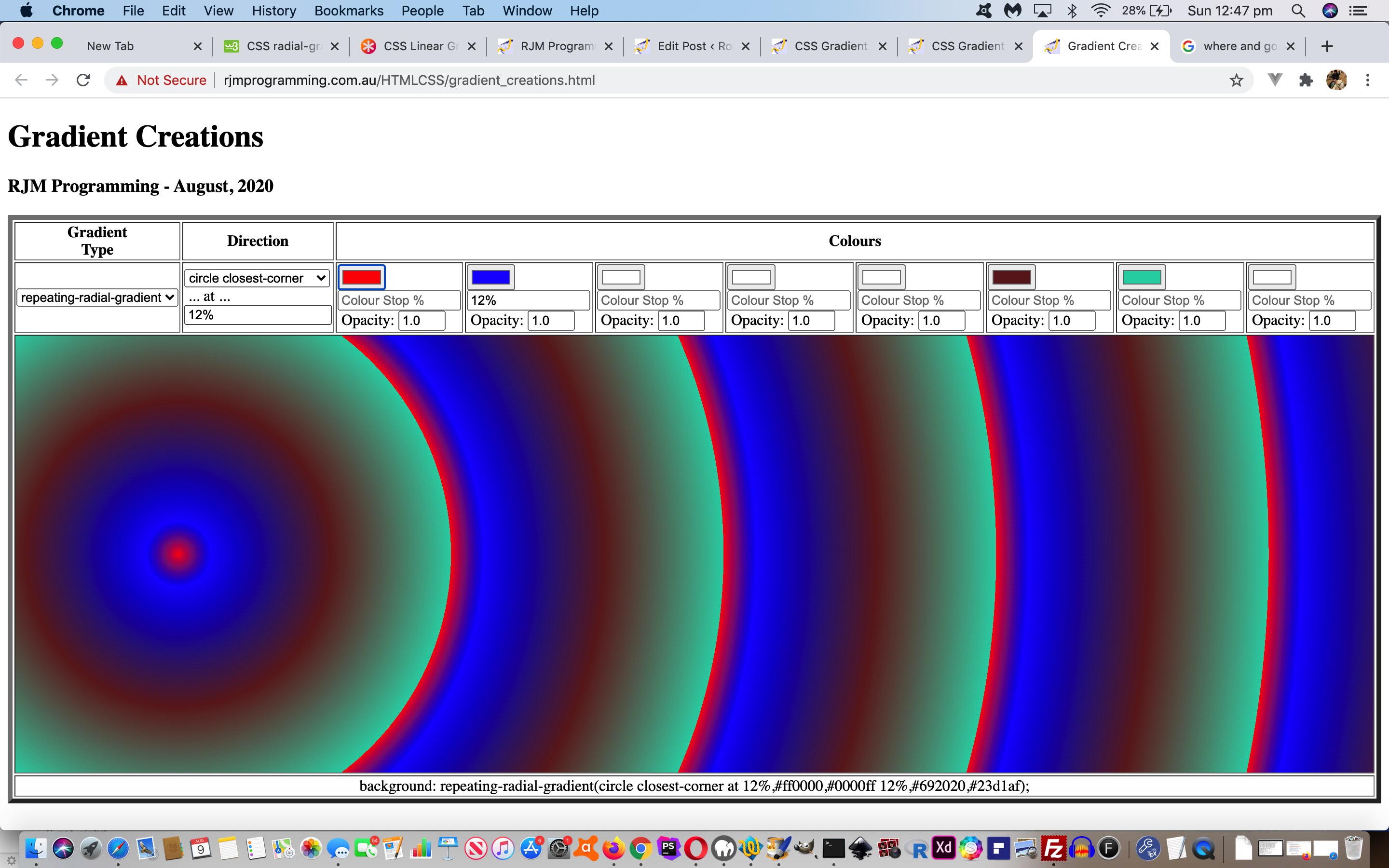 So feel free to try our gradient_creations.html live run link, to see what we mean. 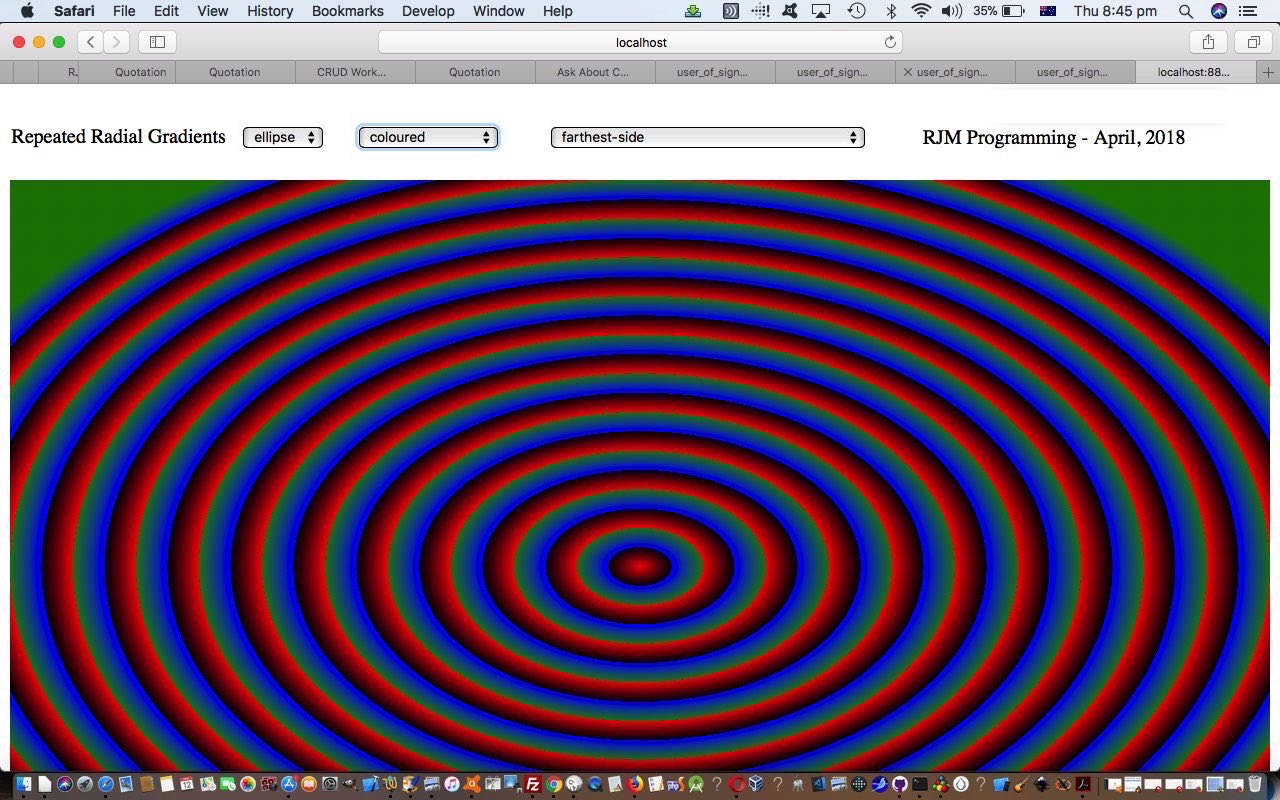 Way back when with HTML/Javascript Canvas Rainbow Primer Tutorial we talked about CSS linear gradients and radial gradients in the one blog posting, but ever since then, it has so much more that linear gradients have been useful to us here at this blog.

Below is one example of the CSS …

Feel free to play away at this live run that has this radial_gradients.html downloadable underlying HTML and CSS (and event logic Javascript that changes the HTML div element className property, to suit). 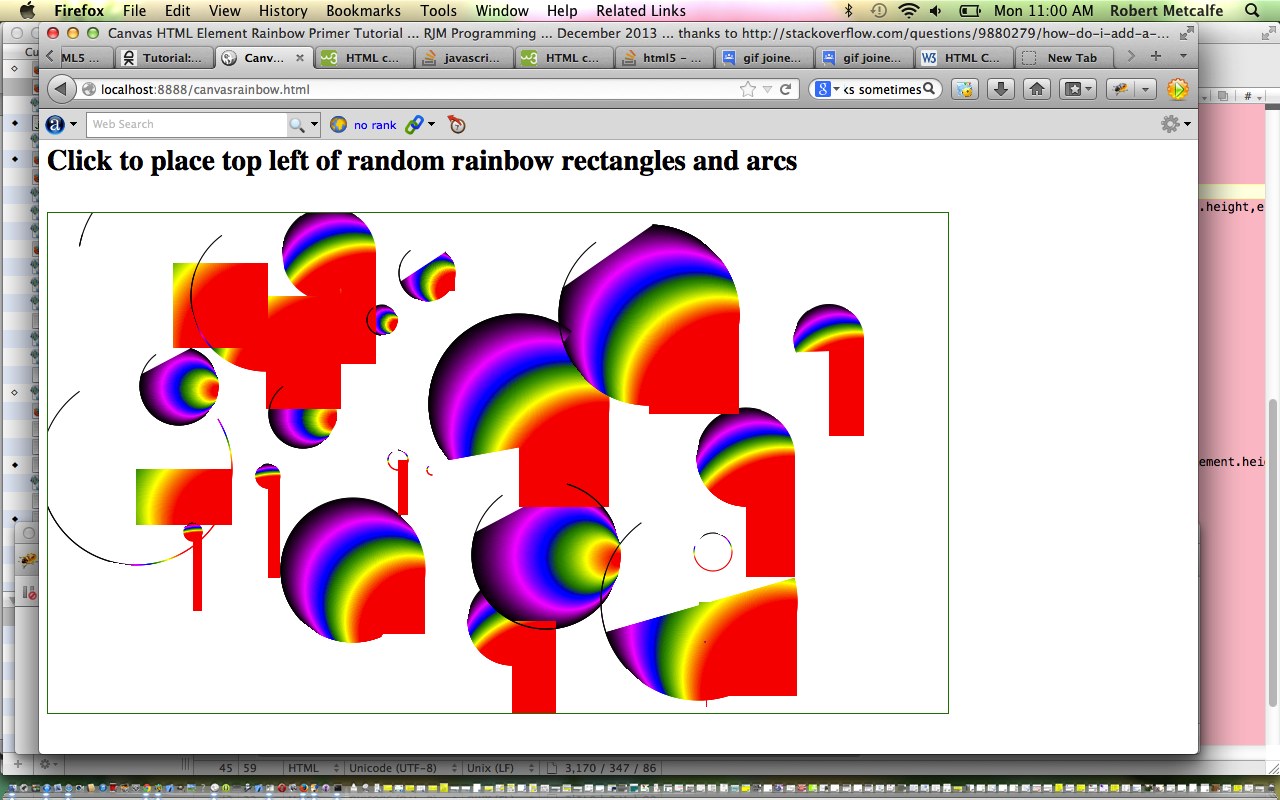 The Canvas HTML element tag can be used as the container to draw graphics on the fly usually via the use of Javascript functions for rendering and event management.

In today’s tutorial we touch on a couple of the two dimensional Javascript functions to draw a rectangle or arc, but in the two dimensional context, canvas HTML elements can be used to draw text, lines, boxes and circles as well. We also touch on two functions to create a linear or radial gradient to the fillStyle and/or strokeStyle of your HTML element placed onto the canvas.

You may want to read more at HTML Canvas Reference as a generic reference, or here, at the tutorial javascript – How do I add a simple onClick event handler to a canvas element? – Stack Overflow.

As you can imagine, this HTML canvas element, new to HTML5, can be very useful for some practical client-side web functionality.

Link to some downloadable HTML programming code … rename to canvasrainbow.html

You’ll notice heavy use of the Javascript Math.random() function.

We hope you enjoy this tutorial as a rainbow coloured live run.