The last time we talked about Ansible (and we want to also direct you to a great article called Ansible tutorial – Automate your systems – Like Geeks, thanks) we advised you to read about the subject “Dynamic Inventory”. This term “Dynamic Inventory” refers to how the host (ie. server) information of an Ansible project could be derived from a system external to the Ansible project (or system) itself, via …

Please refer to (the latter part of chapter 3 of) “Ansible Up and Running” by Lorin Hochstein for more information here.

Basically, if the Inventory File defined in ansible.cfg (configuration file) is made to be executable (perhaps via the application of a Linux “chmod +x [InventoryFile]”) Ansible understands to execute it, rather than read it … cute, huh?! This can take the form of …

… which is the scenario we end up with today.

Let’s let you peruse the files of interest today as below, for our Linux (off) $HOME/myboxes/playbooks scenario …

As for previous Ansible Inventory Primer Tutorial as shown below, we have three server groupings called …

Our work today may have needed to start with vagrant halt if we’d have needed to “clear the decks” so to speak, but we didn’t need to do this, so we started with (our usual) …

$ cd $HOME/myboxes/playbooks
$ ls -l # to look around ... see the inventory directory, see Vagrantfile and ansible.cfg for the 3 vagrant hosts (vagrant1, vagrant2, vagrant3) involved with 127.0.0.1
$ ls -l inventory # to look around ... see vagrant.py (dynamic Python script set to be executable) and hosts file like with tutorial below
$ # ... and so we are ready for "vagrant up" ...
$ vagrant up

… for which vagrant.py Python requires the Paramiko library that may require you (or may not) to try $ sudo pip install paramiko

… to see, Dynamic Inventory with dynamic host possibilities in action in our slideshow today.

The last time we talked about Ansible (with Ansible Playbook TLS Tutorial is shown below) we advised to read about the subject “Inventory”. Well, today, we dip our toes into this big subject matter, and thank very much “Ansible Up and Running” by Lorin Hochstein, specifically, the start of chapter 3.

… and groups can be established for functionality types like …

So we programmers will probably spend our time in the reverse order to server types way above, but the modern way of things may be getting them thinking about …

… either way, Ansible can aid with understanding and project management and testing regimes and project architecture (understanding), even for those programmers not in the “big picture” meeting loop.

… like to take a pause at a good “vagrant up” scenario …

… and add in some “variables” concepts …

… as shown by the bold references in the hosts Inventory File (we “get to” today) to end up with our hosts Inventory File at which point we’ll break off with our explorations of Ansible with you going off to research “Dynamic Inventory” (from the second half of chapter 3 of “Ansible Up and Running by Lorin Hochstein … no doubt?!). Before we go, just wanted to say, that although we don’t “make things happen” today with our “early days” scenario, we did check Inventory File syntax by shaping to run a playbook … we shaped to run one via … “$ ansible-playbook web_notls.yml” # from that playbook of the previous tutorials below.

Yesterday saw this blog’s first Ansible Playbook to create an nginx web server on a VirtualBox virtual machine referenced by HTTP://localhost:8080 but, did you notice, that https://localhost:8443 came up with, in Firefox, at least …

The connection to localhost:8443 was interrupted while the page was loading.

The page you are trying to view cannot be shown because the authenticity of the received data could not be verified.
Please contact the website owners to inform them of this problem.

? … And that’s because we didn’t cater for Transport Layer Security, or TLS. So we’ve got lots to cover as we continue on with Ansible Playbooks …

… and this constitutes a ramble along through the actions advised in the latter half of Chapter 2 (“Playbooks: A Beginning”) of “Ansible Up and Running” by Lorin Hochstein, our highly recommended guide for today’s “excursion” and the book from which any quotes below were from. So please fasten your seatbelts and we’ll be off.

To avoid the “Untrusted Connection” webpage you’d need to get the certificate issued by a proper authority rather than being self-signed, as for our example today. To read on we’d recommend reading about Ansible Inventory.

As a programmer, as time goes on, I get the creeping feeling that more is being asked of our job description. Pretty sure am not alone, and hope world employment is not going to be too hard hit by similar such “pushes”. Thinking on it, though, what would we expect to happen if robotics seriously became more “real”? Don’t think it takes a Nostrodamus futurist to have predicted: ‘Programmers would be drawn more into the “modelling” of systems and “deployment”.’

… and, trying not to overstate all this too much, but deployment with software tools such as Ansible makes all the above possible for (programmer) people whose strength is not exactly “deployment” or “configuration management”.

The reason to try to not overstate all this is that Ansible is based on very simple principles … “Ansible is masterless and it uses SSH as its primary communication layer.”.

In the meantime, research into Ansible Playbooks would be a great idea.

Specifically we’re going to meander along through the actions advised in Chapter 2 (“Playbooks: A Beginning”) of “Ansible Up and Running” by Lorin Hochstein … just in case you haven’t done this yourself.

Ansible Hello World Primer Tutorial left us with a Vagrantfile …


… and an nginx configuration file (you could call nginx.conf) …

… and an Ansible template file (you could call index.html.j2) … to result in …

So that’s a simple Ansible playbook example for you, and we hope to develop this further over time. Even so, have to tell you that at the browser going “HTTP://localhost:8080″ for a while I was getting ‘Safari can’t open the page “‎localhost:8080/index.html” because the server unexpectedly dropped the connection. This sometimes occurs when the server is busy. Wait for a few minutes, and then try again.’ As ansible-playbook web-notls.yml had shown no errors, tried ansible-playbook -vvvv web-notls.yml with no difference. After lot of looking around found it to be an “up to” threefold issue … 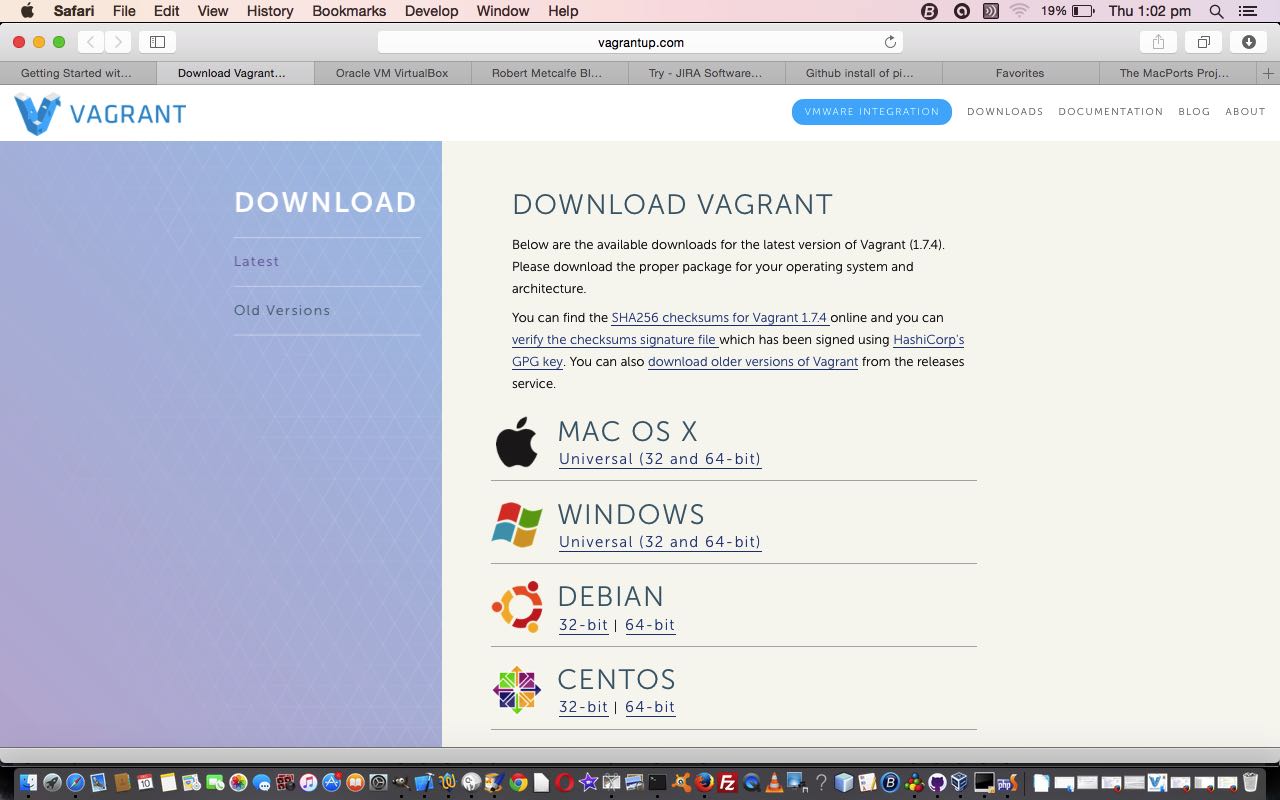 In understanding what is out there on the net, tend to want to form relationships in my mind, between applications.

So here’s another one that’ll knock your socks off (and you’ll want to read after/before/same time/while having corn flakes as today (to get it all in context, if this is new knowledge)) … Ansible with Vagrant, that we talked about yesterday with Ansible Hello World Primer Tutorial as shown below. As you read it, take note of the title of the book we recommend … “Ansible Up and Running” by Lorin Hochstein … the word “up” is bound to be in the list of a deployer’s favourite words, and is critical to all “Vagrant” talk as its favourite command (and its “nirvana” (if successful), and is slow the first time (when “vagrant up” is often preceded by an initialization vagrant command such as “vagrant init ubuntu/trusty32″) with a project on an individual programmer’s system, but fast from then on for that programmer “revisiting”, so that on multiple projects they’re zooming (ie. cd’ing) around to places and going “vagrant up” vagrant up vagrant up vagrant up) is …
vagrant up
… and for today’s book recommendation … “Vagrant Up and Running” by Mitchell Hashimoto … fancy that?!

So what’s Vagrant? And why is it so friendly?

Can try to answer the first now, but the second one relates to early times spent with Caspar the Ghost … but we digress.

To quote the Vagrant landing page …

Without this Vagrant and VirtualDisk (or VMWare) relationship, the job can be done, but you often find the (different) environment (between the programmer environments and the client environment) causes problems during the deployment phase, whereas using these products helps mitigate against these issues. Comprehendo?

The role of a programmer is expanding into deployment with software tools such as Ansible, because it has the capability of making the piloting of automation systems “approachable” as an “art”.

Why would you want to “pilot an automation system”? Well, to see the whole picture, when you (are part of a team that) are given a software project of improving a “system”, wouldn’t it be great to …

? We think it sounds very good, especially with Ansible helping out with that modelling, because a lot of the doubt in a programmer’s head when working away from a customer site’s environment (back at their office, perhaps) on a project that is going to be deployed back at the customer is that what they are seeing working, may not work when taken back and deployed onto the customer site’s environment again. The work methods above help to mitigate that, and Ansible really helps with the deployment aspects to the whole job, leaving programmers more time to get back to what they enjoy the most, methinks … programming and unit testing.

Without Ansible, achieving a project with new (never before used) software tools required, involves programmers working out the configuration management aspects to the job via Search Engine Searches (with a lot of “Adding to Favourites”) and/or the recalling of online documents (often from the OpenSource world), and trialling configurations, hopefully combined with personalized accompanying documentation. Employing Ansible into the planning may still involve this initial effort, but should never happen again, because what you are left with will be an Ansible approach capturing knowledge that has a far better chance of staying up to date.

Ansible is pretty obviously most advantageous in complex deployment scenarios, but it can be applied to the one server (and we are talking Linux or Unix with this today, but Windows is also supported) scenario as well, and we’ll be showing a bit of this today, to show you a bit about how Ansible works.

… and direct you towards a good book, namely “Ansible Up and Running” by Lorin Hochstein, from which a lot of today’s blog posting’s information is derived … so, thanks.

Okay, so what will we do with Ansible?

… or you can install into a Python (2.6 or above) virtualenv with wget via …

… mean something at a command prompt (if not, a “find / -name ‘ansible’ 2> /dev/null” and adjustment of PATH in ~/.profile may be necessary) … a suffix of ” -vvvv” is useful for debugging purposes.

Show you a 127.0.0.1 local web server with VirtualBox “Hello World” feeling example using Ansible involved the need for installation, as required of Oracle’s VirtualBox and, for tomorrow specifically, we talk about Vagrant via …

… then, working off the install we made of Ansible we found an example hosts file off the install, and copied it to /etc/ansible/hosts.orig as shown by …

Ansible is not alone with what it sets out to achieve … think Chef, Puppet or Salt … read more thanks to this useful link for that information.

We hope to be back with more about this powerful product as time goes by. In the meantime, research into Ansible Playbooks would be a great idea.