Video via Slide Images and Back Again via ffmpeg Primer Tutorial 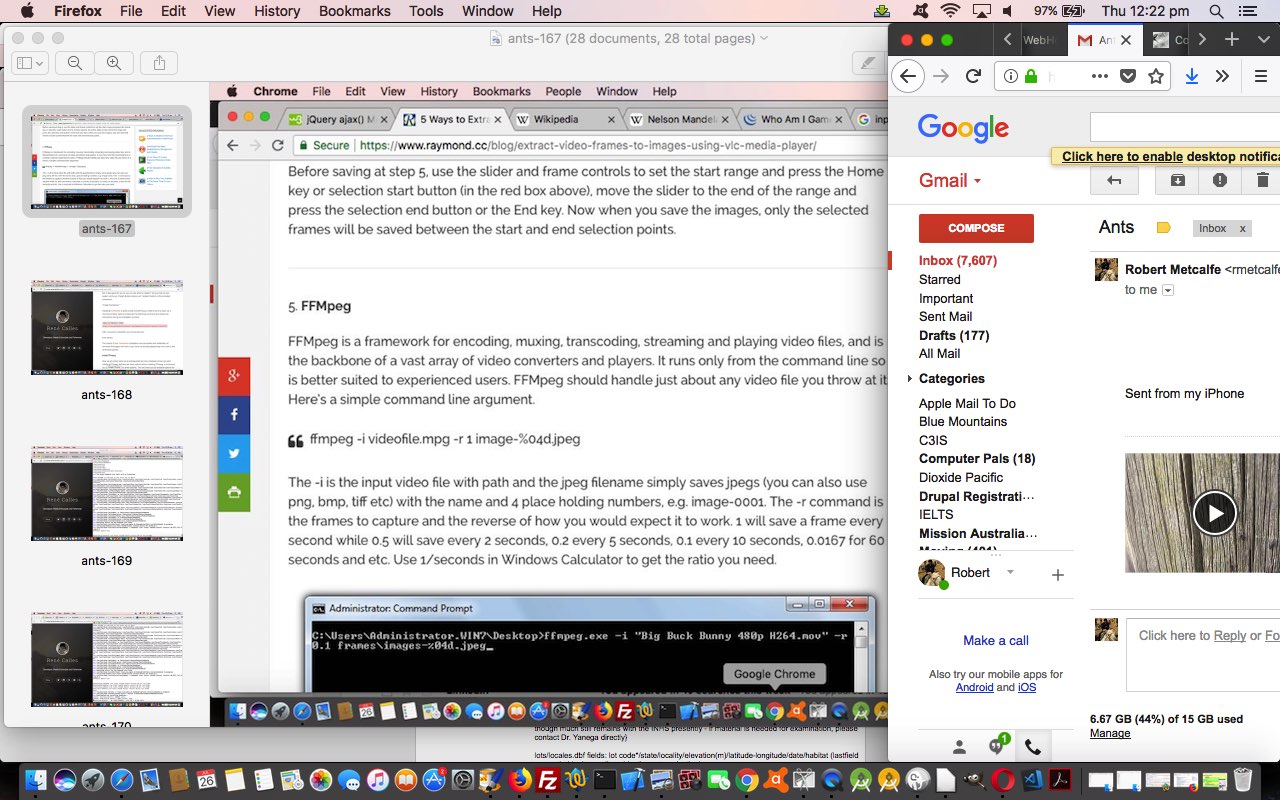 Video via Slide Images and Back Again via ffmpeg Primer Tutorial

Reading yesterday’s LibreOffice Spreadsheet via dBase Primer Tutorial you can’t say I didn’t warn you about my interest in ants (and bees)? Glad you asked?

So seeing some ants walking in line up a power pole, used an iPhone to capture a very short video (short enough to use the iPhone’s Photo app’s Share via Mail (attachment) method of emailing to the MacBook Pro, and then (Gmail website) downloading) of this, and later, buck the “ant” trend, and “anthropomorphise” a “star ant”, by honing in on an ant in this video and ring it (and its movement) before creating another “Star Ant Video”.

There are video editing approaches you could use, but what got us interested was the thought of …

That’s where one of our favourite Mac Os X friendly media players, which is also a command line “player” (yayyyyyy!) comes to the fore, for us. It’s the wonderful ffmpeg which we’ve had for a long time now on this MacBook Pro until a disk crash mentioned some weeks back. Could get it back off restore, but decided to reconsitute …

… as a fairly straightforward exercise (given you have Xcode installed already) via a How to install FFmpeg on Mac OS X webpage by René Calles, thanks, heaps, we discovered the commands that worked well for us that go …

… could create those original 7 (slide) images, though the use of a value bigger than 1 frames per second for the “-r” switch could be on the cards for your usages.

How to edit those images? We just used the Mac OS X version of PaintBrush and lined a lot of these images side by side across the screen to try to track our “Star Ant” and award it the “Red Ellipse PaintBrush Order of Merit” (for individualism … tee hee).

Reconstituting the new slides into a new video we remember was another talent of ffmpeg and found this useful webpage, thanks, on the topic of taking raw (slide) images to create a video via ffmpeg. Actually, though, we also had our previous very useful Animated GIF and Video via PHP Writing PHP Data URI Tutorial (presented below) to turn to to end up with the Mac OS X (Terminal session command line command …

There are no worries with video file “workings” to do with uppercase and lowercase and names, so we …

See a lot of all these goings on at today’s PDF slideshow. 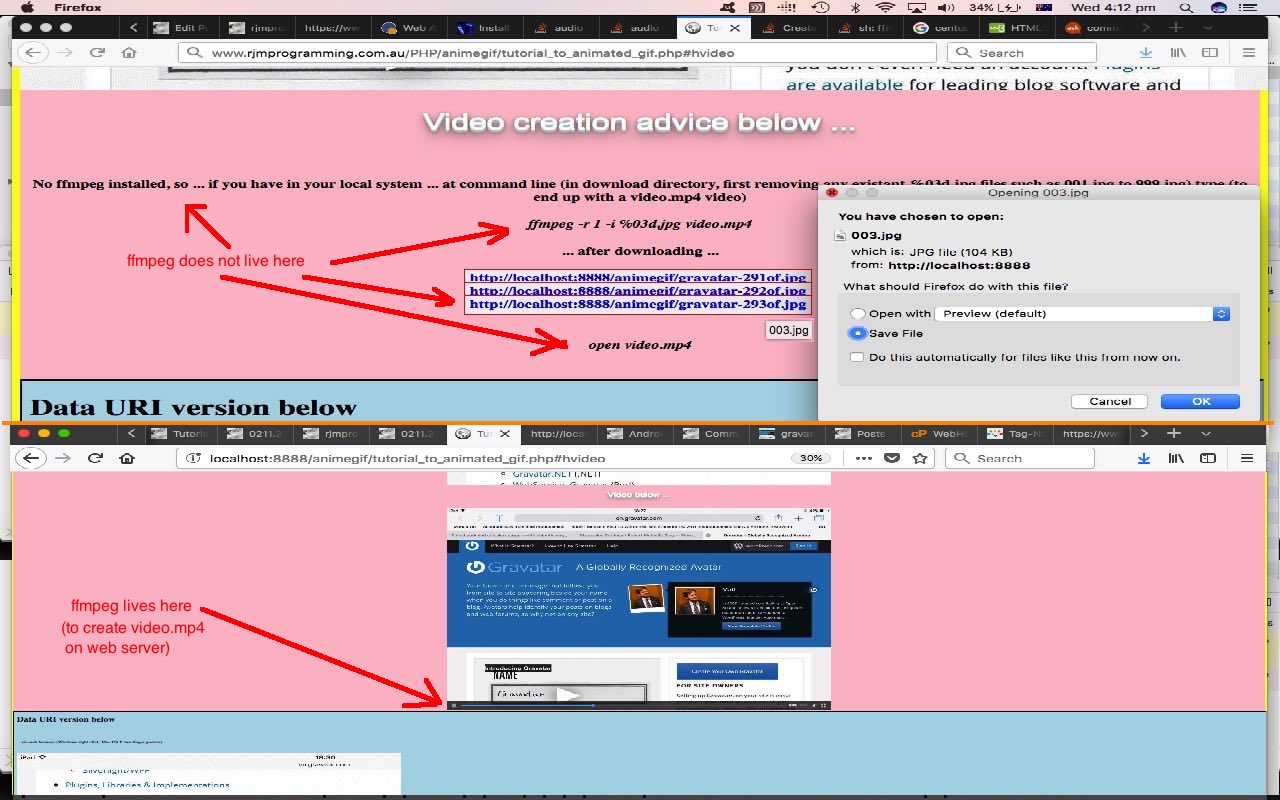 There is a great open source command line application called “FFmpeg” that can create video (or convert video) from image slides (for instance), and so, if we merge functionality for this into yesterday’s Animated GIF and Slideshow via PHP Writing PHP Data URI Tutorial some “presentation” styles that our web application can process are now …

As useful as “FFmpeg” is, it is not necessarily a default application existing on web server operating systems like our rjmprogramming.com.au’s CentOS server. But we do have it on our Mac OS X (MacBook Pro) operating system’s command line, so we write our PHP determining whether to …

If you are a regular at this blog and “FFmpeg” sounds a bit familiar to you, that’s probably because you’ve read FFmpeg Image Optimization Primer Tutorial on an earlier occasion … by candlelight … with the lights dimmed?!

See this in the context of how this PHP tutorial_to_animated_gif.php code changed for videos in this way or try it as a live run. 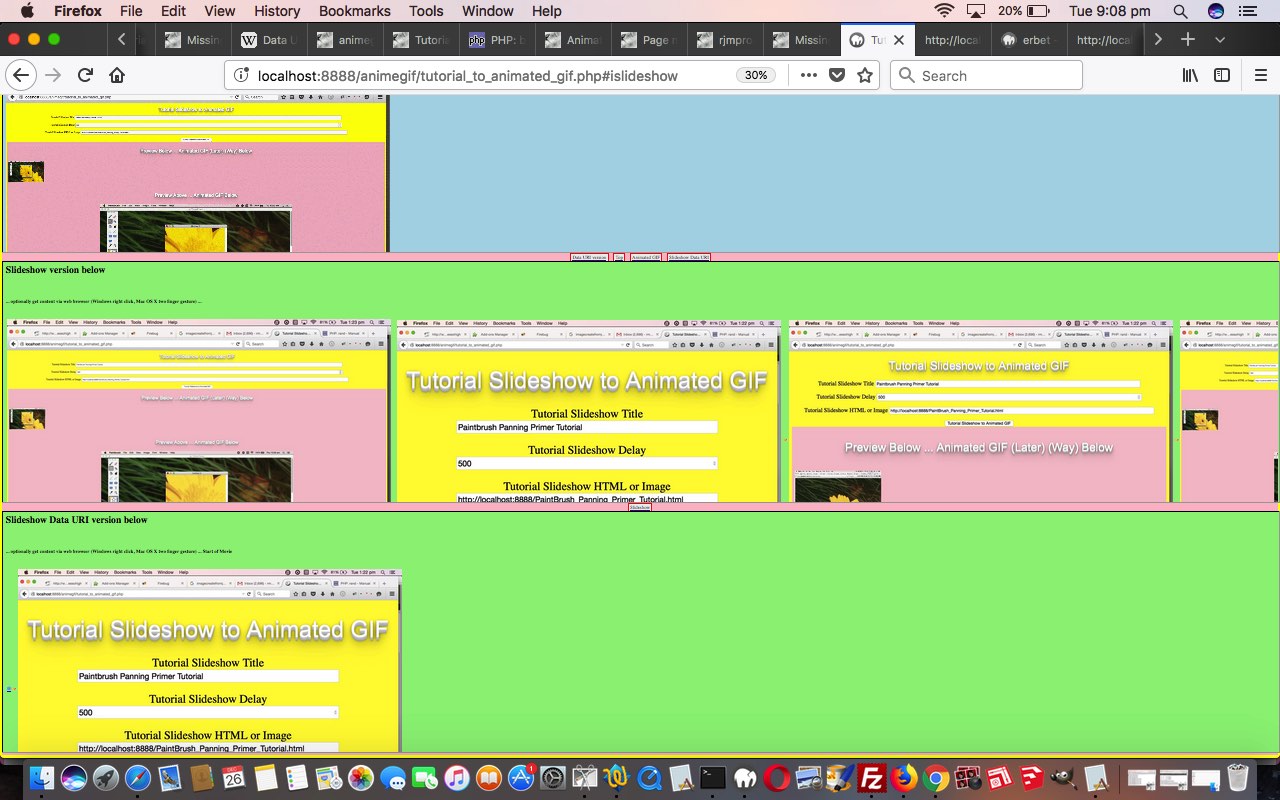 To us, there are great similarities between animated GIFs and slideshows, as two forms of “presentation”, and so to extend yesterday’s Animated GIF via PHP Writing PHP Data URI Tutorial animated GIF creator “PHP Writes PHP” web application that now has the option for data URI “exports” we add the functionality for …

… that little bit different to another “stacked” (or z-index feeling) approach we talked about with Multiple Class Slideshow Details Tutorial, where HTML element “class” properties were changed so that the last class defined reflects the look of the slideshow slide desired at any given time. We just use an array, and a setTimeout timer to achieve the same ends today, with our work (or “presentation”). If this “horizontal versus stack” navigation choice interests you, also take a read of HTML Input Element Types Randomized History Tutorial.

Again, with all this added functionality, because it is “hosted” in an HTML iframe element all the existant web browser (Windows right click or Mac OS X two finger gesture) functionality can come into play, and make life quite interesting for your non-mobile users “collecting” data URIs … there are worse hobbies!

You can see this in the context of how this PHP tutorial_to_animated_gif.php code changed for slideshows in this way or try it as a live run. 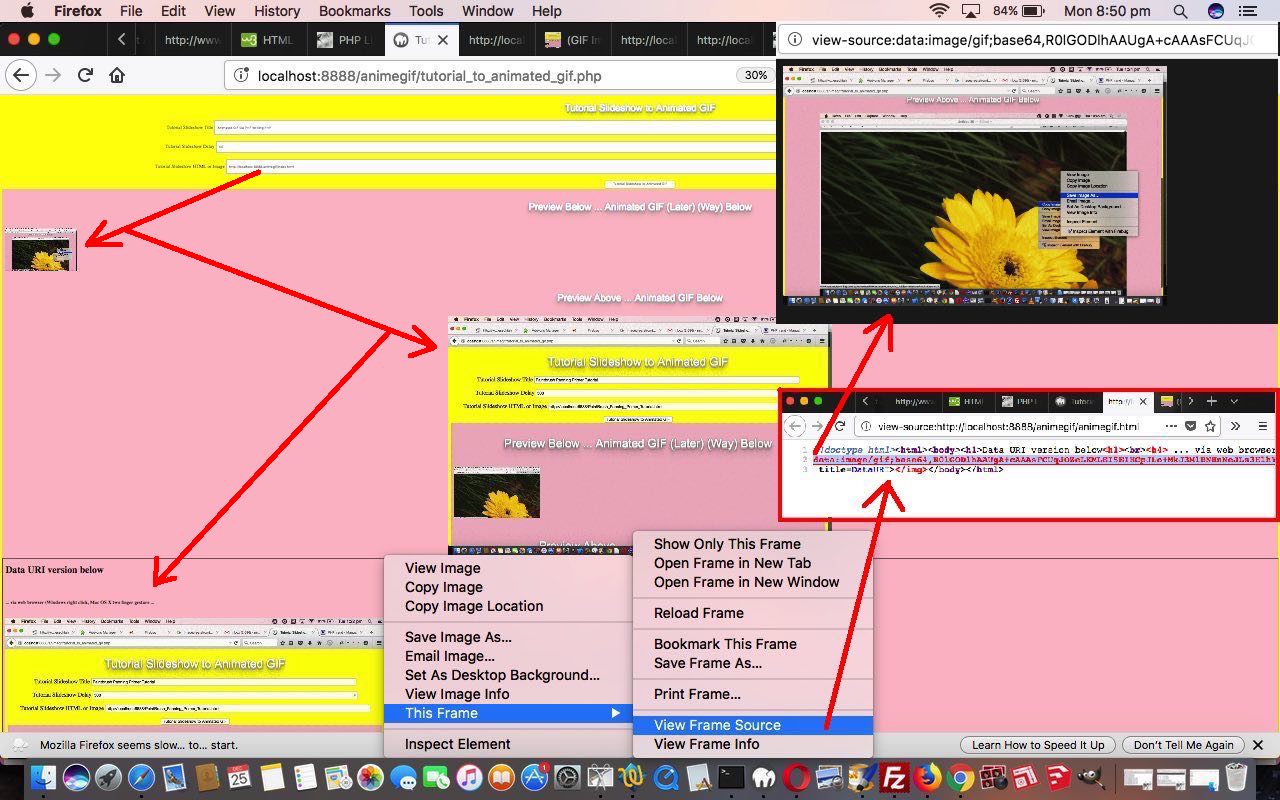 The previous relevant “PHP writes PHP” methodology animated GIF creator we talked about, first, with Animated GIF via PHP Writing PHP Primer Tutorial came back to mind yesterday with our Missing Javascript Audio on Unmute Tutorial, where we pondered on whether an animated GIF could be represented on a webpage by a data URI. Why take an interest in this? Data URIs are very important to do with …

… and ideally, animated GIFs are also not just a decorative part of all this web application usage (as they can be a very efficient representation of an animation that could not be a more succinct way to show that animation or presentation), and if they can be made to be like any other GIF or image data file in the ways they can be represented (and used), then that is all for the good.

So we changed the Jeroen van Wissen’s inspired PHP (“PHP writes PHP” methodology) code tutorial_to_animated_gif.php code allow for this extra animated GIF data URI representation in a new additional HTML iframe (containing the animegif.html of code below) that when harnessing existant web browser (Windows right click or Mac OS X two finger gesture) functionality can glean for us, as required, that animated GIF’s data URI representation. But don’t get too excited about this being rocket science, in that with a bit of effort, and PHP, it could have been gleaned from what we already produced, in that (in PHP “land”) …

You can see this in the context of how this PHP code changed in this way or try it as a live run. 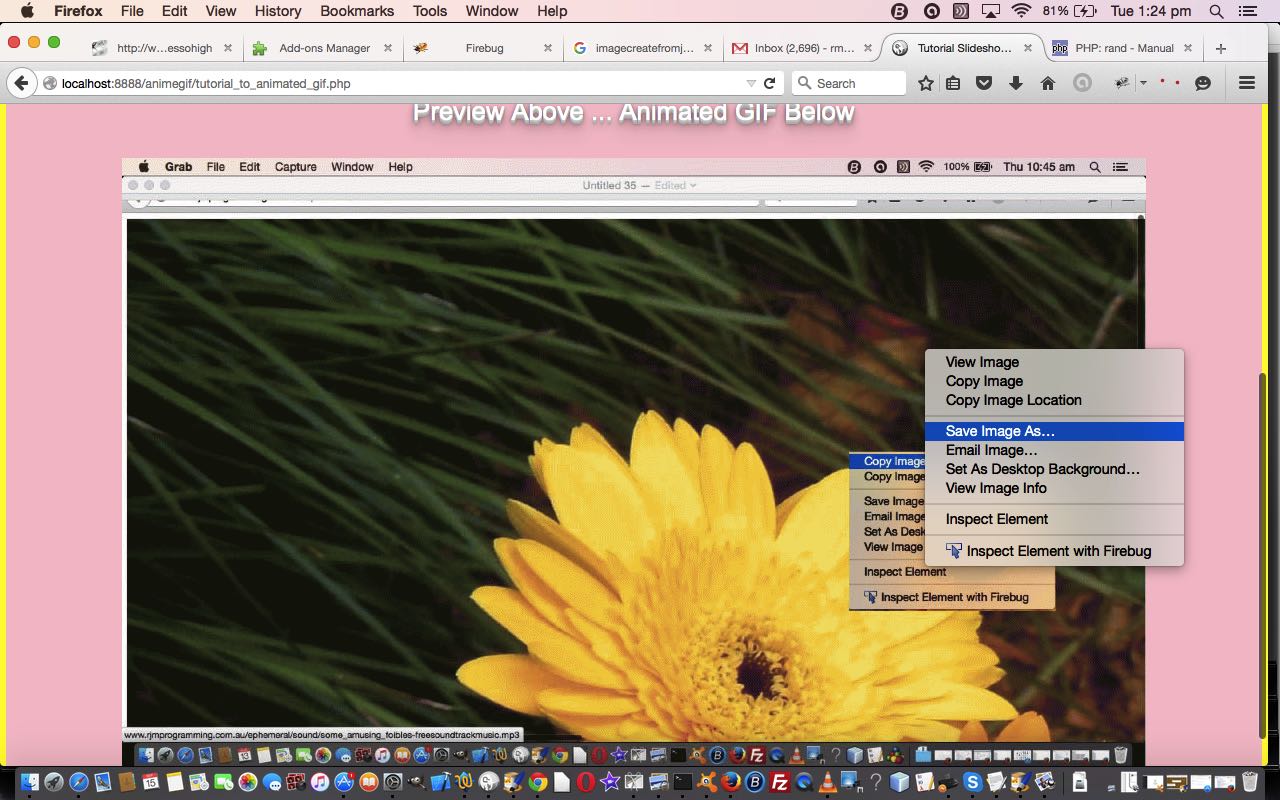 We find another very useful reason for PHP to write PHP. Today we establish a PHP web application to dynamically create Animated GIF images via some still images, like Gifpal would do.

We have some great open source PHP code to thank for the basis of the functionality we found at Jeroen van Wissen’s very useful link, thanks.

Then we added a more user friendly interface to get the information off the user we need. We present this in an HTML form, which navigates to the same PHP to do the actual assembly of the Animated GIF via techniques where PHP writes PHP … and really needs to, to be useful.

Do you remember, last, when we did some PHP writing PHP functionality … PHP Writes PHP Vertical TextBoxes Primer Tutorial?

And inside the PHP it makes big use of the GD and Image Functions to read and write the image data we assemble via the user information.

This Animated GIF form of animation is the easiest to implement, as it consists of just the one GIF image file, but the user has very little control over the animation settings, such as the delay between stills, one of the settings we ask about in our web application.

Our PHP source code today you could call tutorial_to_animated_gif.php and we redirect you to some live run ideas …

Hope you find this tutorial useful.