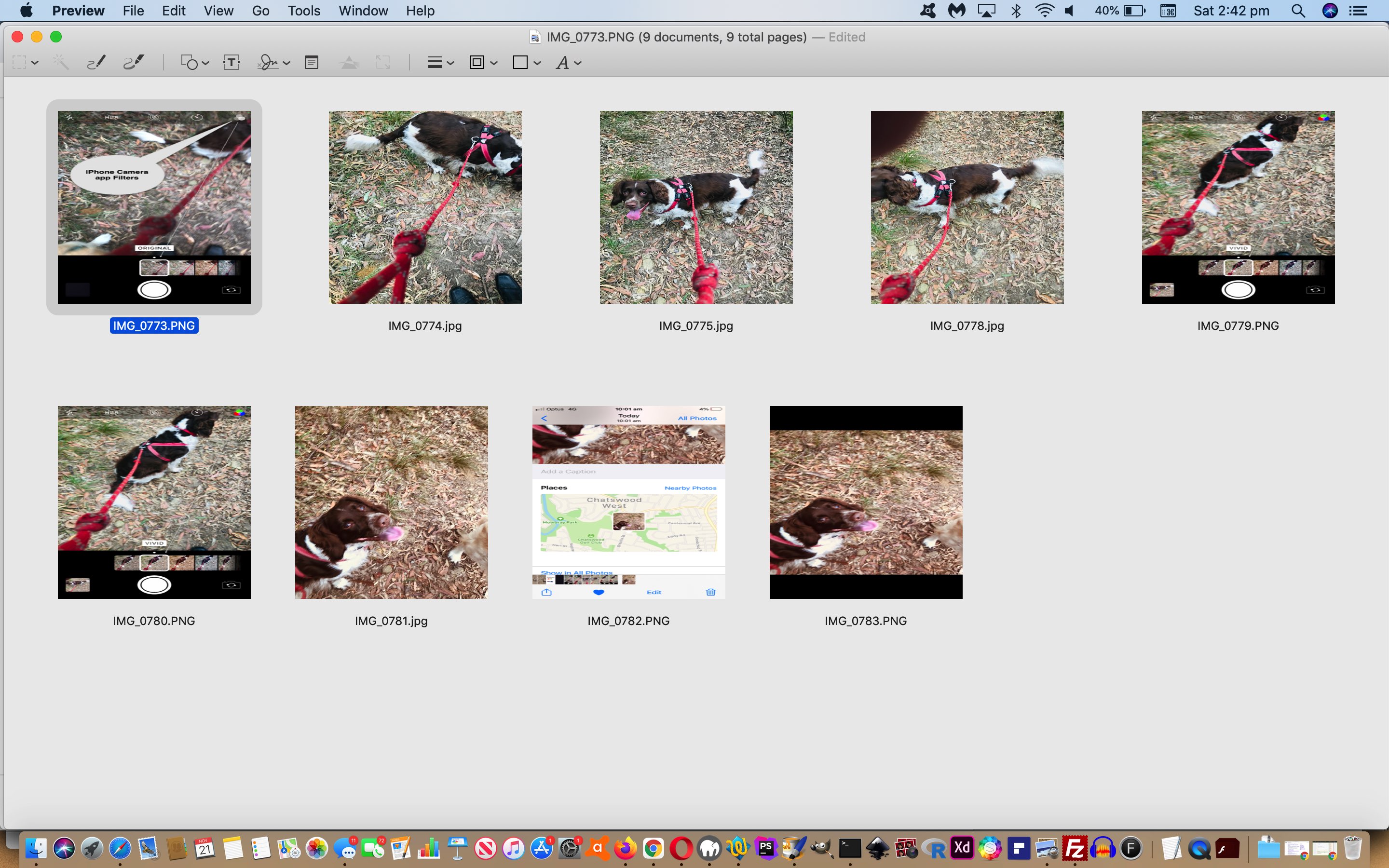 Along the same lines of thinking as the recent Email iOS Vignette Primer Tutorial we’d like to revisit the iOS Camera app of your iPhone and iPad devices today, and talk about that top right “three circles intersecting, initially white” icon that appears after taking a photo, and that on using can turn into a colourful three intersecting circles icon. What is that? Let’s read from an excellent write up about Apple’s iOS Camera app Filters (yes, getting back to those lens filter ideas we’d use on SLR Cameras (and the like) as we take the photo) …

Have you ever taken a photo on your iPhone and wished you could tweak it just a little bit? Maybe the picture is fine, but you know that if it were a little warmer or maybe had some more greens, it would look so much better. Thanks to some of the built-in camera filters and effects, you can make those adjustments with just a few taps.

… fitting into this increasingly sophisticated digital camera (app, as far as the iPhone and iPad are concerned) “just after taking the shot” (or “creating a screenshot”) set of functionalities that seem to house the biggest advances in domestic photography functionalities, at the moment. The recent …

… all helping that iOS Camera app be like your “ancient days” darkroom, and now be like the pockets of your “SLR camera bag”. If you remember back to “ancient days”, and those “ancient days” are not gone amongst professional photographic circles, we’re sure, the darkroom might have been the only port of call after taking the photograph on film to control the look and form of the resultant photograph. Mind you, that “darkroom meddling” had a plethora of places to intervene, just as software is helping out the “digital photography” woooooorrrrrllllld …

All in all, with the iOS Camera app it is “take the shot, whatevvvvveeeeer” is more the go these days, and “help is at hand” to adjust things as is required, before “there and then sharing of the moment” are the goes. But if all this has “went you by”, no worries! Just share anyway, and there are also a plethora of “after the moment” image apps and editor apps to create the impression you want, or “they want”, anyway!

It’s really apt functionality, because, presumably, you went to the effort to screenshot for a good reason you might want to explain about, to a sharing recipient. We used it for the tutorial picture featuring in Landing Page WordPress Tags Primer Tutorial. And they say …

A picture tells a thousand words

Today’s animated GIF presentation shows you some of this functionality in action! 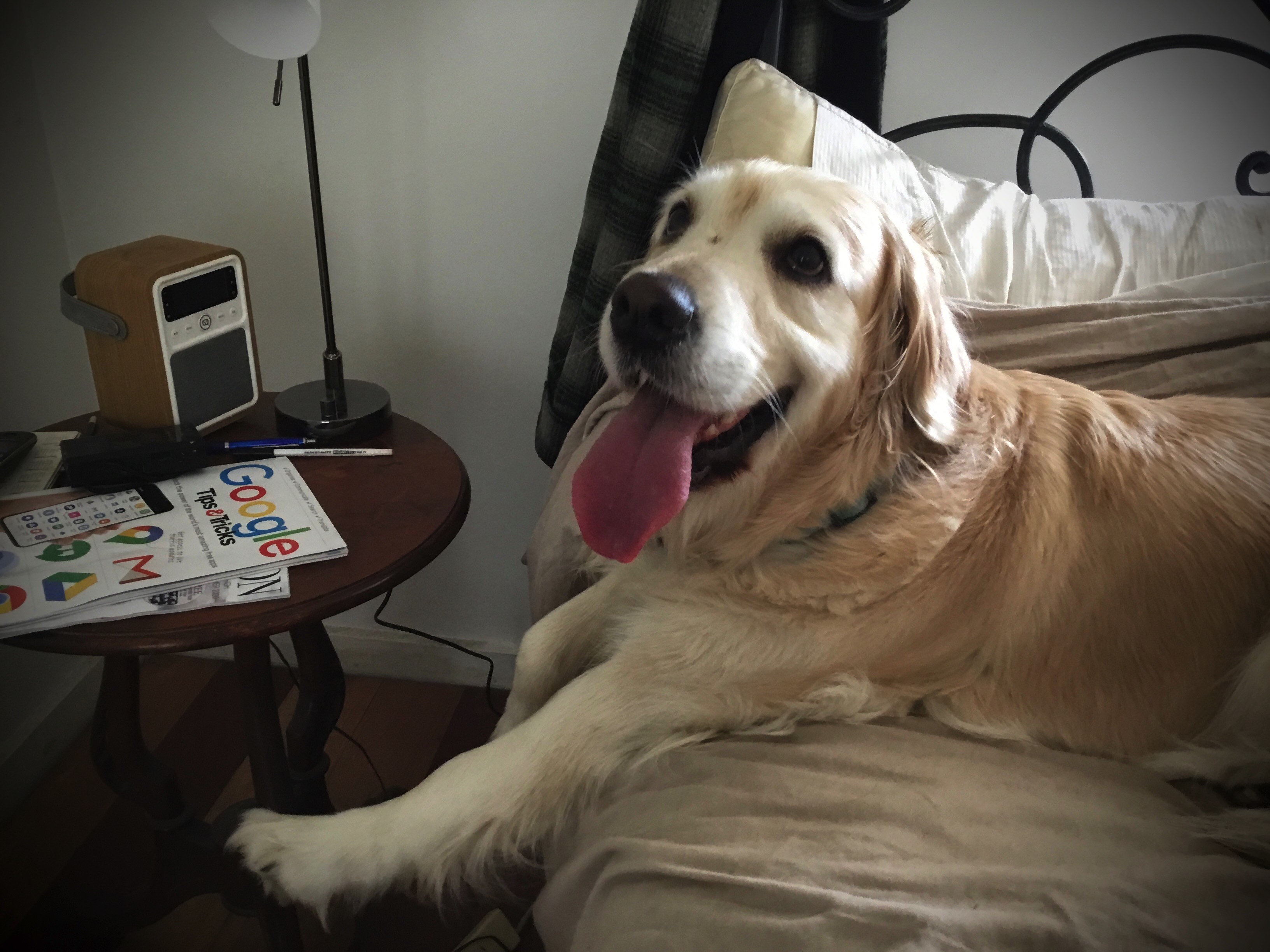 Pretty obviously, its’s not just your more sophisticated graphical editors, as with Gimp Vignette Primer Tutorial that are capable of vignetting a photograph, the example task for today’s tutorial.

For your iOS mobile devices like the iPad and iPhone, on the way to sharing that photograph, and today’s tutorial title dedicates itself to the idea of Email Sharing, but there are many more Sharing options than Email with iOS mobile devices. These days, on the way to that Sharing with recent iOS versions you will see an “Edit” link or “Edit Photo” link that can take you to an image editor on the way through to Sharing, meaning that …

… crowd, but get in ahead of the game, being your own critic before others do?! Cute functionality, huh?! 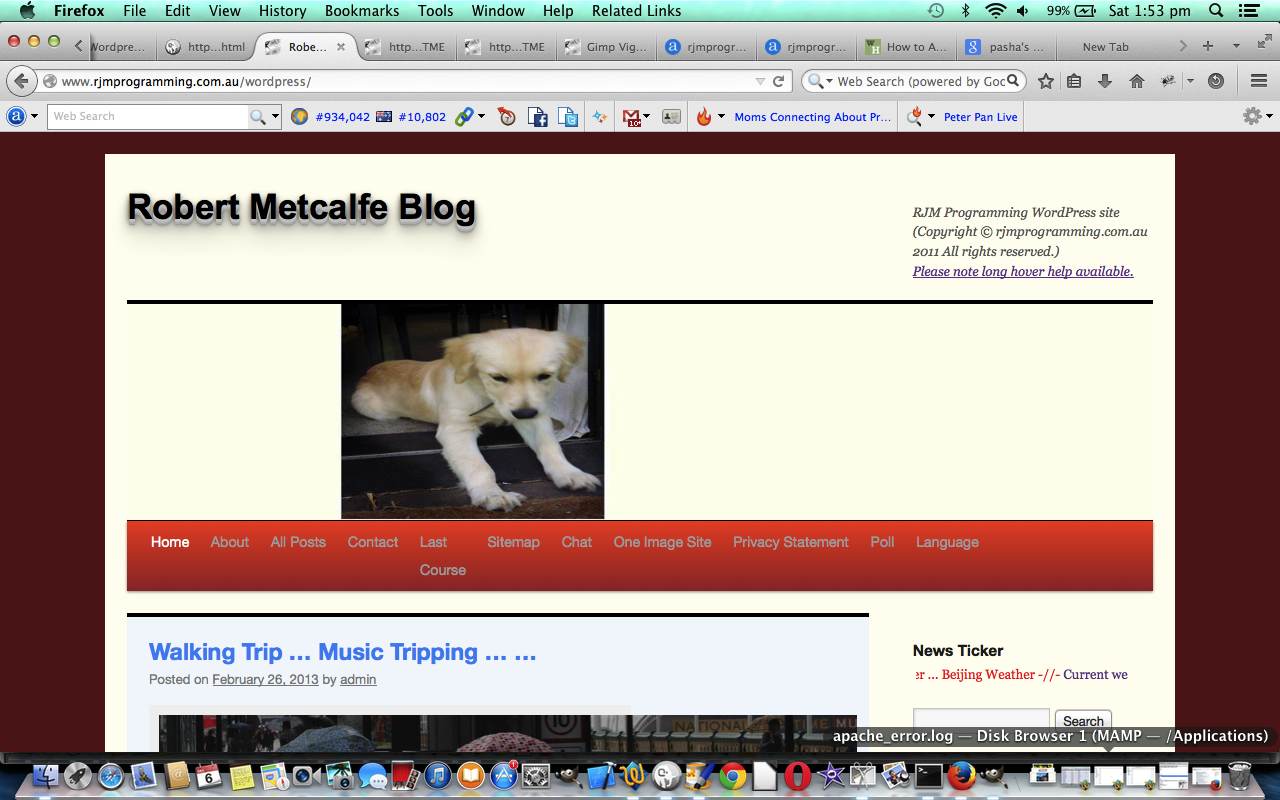 The last time we talked about the miraculous, redolent and amazing image editor called Gimp am sure there was someone in a shower … it stands to reason … and one of those showerers, surely, would have been singing The Gimp Song … and if not … why not? … but we digress … anyway we had the Gimp Transparency Primer Tutorial as shown below go into some image transparency issues with Gimp.

In today’s tutorial we make use of a great tutorial (even so far as with direct quotes below) called Add a Vignette to a Photograph with GIMP (thanks) to try a photographic technique called vignetting on one of the photographs we added, recently, into the mix of those of the Custom Header Image mix at this blog … specifically the one of Nala, the dog, on the door ledge. Need to warn you here and now that if there was the time all over again, it would be better achieved that second time around, but this is not the point with learning, but rather getting some starting point with a great “product” like Gimp, and trying it yourself, once you have a method. It boils down to:

Here is an image comparison link.

As with most Gimp ideas, jump in and give it a go, as you’ll find your own ways and means of using this great product … am pretty sure. 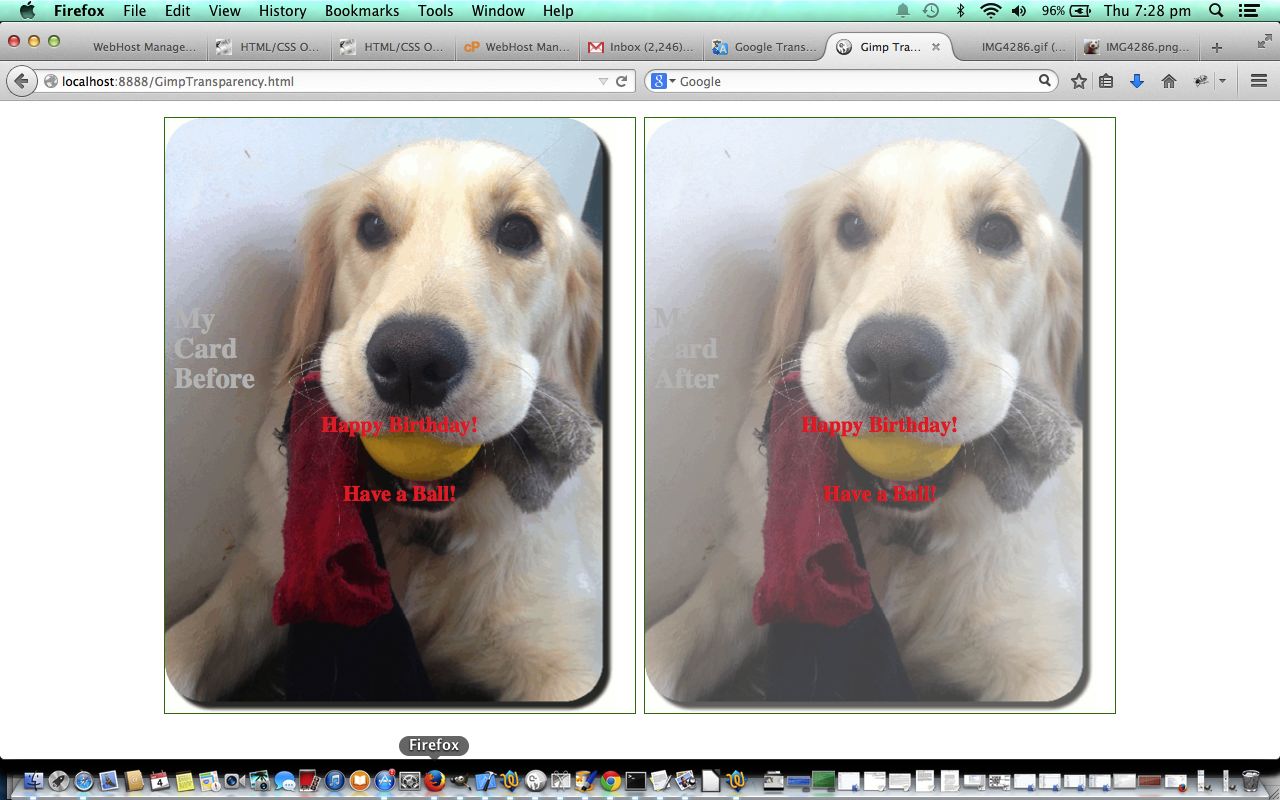 Here is a tutorial that adds to a previous Gimp Layers Primer Tutorial as shown below, and gives you more insight into the massive possibilities of using a sophisticated image editor and use layers with various amounts of transparency, especially suited to use with png image files.

Today’s tutorial where we construct a Birthday Card that needs tweaking for the words in front to be seen a bit more clearly, by making the image behind a bit more transparent, changes the transparency of a single image via:

As with most Gimp ideas, jump in and give it a go, as you’ll find your own ways and means of using this great product … am pretty sure. 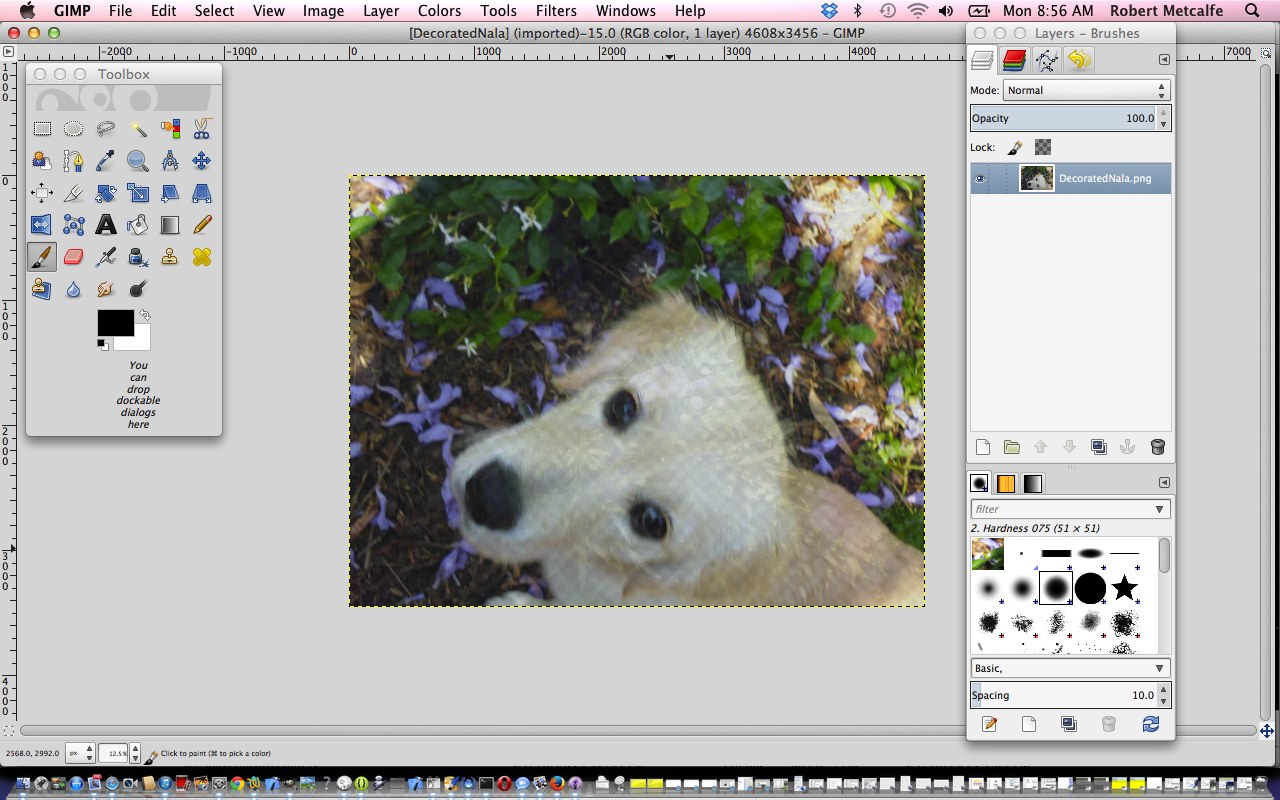 Here is a tutorial that gives you an insight into the massive possibilities of using a sophisticated image editor and use layers with various amounts of transparency, especially suited to use with png image files.

Transparency (or its obverse, opacity) can be used to have the one image achieve several “ends” (ie. purposes). Although it is a bit of a clumsy example in the tutorial, you can see that the technique can be used for artistic purposes … often called “Photoshopping” (named after the more famous, and also brilliant, rival product, Photoshop).

Lots of those classic “Photoshopping” techniques can be achieved in Gimp, and some other tutorials at this blog touch on that.

Am sure you can imagine what the concept of a layer is with regard to image manipulation. Within Gimp, for beginners not used to this concept, you find yourself underestimating and underplaying what can be achieved with the various layers of a multi-layered image. In simplistic terms each layer has the functionality in Gimp to be treated as a whole new image, and this is the best way to think of it when trying to achieve what you want to achieve with Gimp.